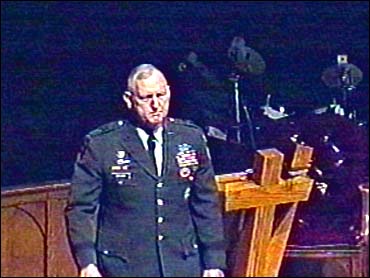 Several Islamic and religious freedom groups and foreign officials criticized Army Lt. Gen. William G. Boykin last week when reports surfaced of his comments during several speeches at evangelical Christian churches. Boykin said the enemy in the war on terrorism was Satan, that God had put President George W. Bush in the White House and called one Muslim Somali warlord an idol-worshipper.

As CBS News Nationsal Security Correspondent David Martin reported last week, Boykin had raised eyebrows with remarks he had made to church groups.

Asked about that comment, Boykin told CBS News he was not referring to the Muslim God, Allah, but to the Somali warlord's worship of money as an idol. He added that he does not believe the war against terror is a battle between Islam and Christianity.

Martin reports Boykin has shown church groups photos he took of Mogadishu with black slashes in the sky which he says did not come from any defect in the camera or film.

The Pentagon released a statement from Boykin apologizing to those who were offended and saying the three-star general did not mean to insult Islam.

Boykin is the deputy undersecretary of defense for intelligence.

Rumsfeld for a second time declined to offer an opinion on Boykin's statments, saying he watched a network news video of some of the speeches in which Boykin's words were unintelligible.

"I'm going to wait for the inspector general to complete their review and come back to us," Rumsfeld said.

"He mentioned to me how sad he was that his comments created the fury they had," said Pace, who joined Rumsfeld at the news conference. "He does not see this battle as a battle between religions, he sees this as a battle between good and evil, the evil being the acts of individuals."

Reports of Boykin's comments came as the Bush administration continued its drive to persuade Muslims that the war on terrorism was not a fight against their religion. Rumsfeld repeated that view Tuesday.

But the defense secretary would not say why Boykin's Pentagon-approved statement included a defense of his statement that the United States is a "Christian nation."

"My references to Judeo-Christian roots in America or our nation as a Christian nation are historically undeniable," Boykin's statment said.

"It is not our statement, it is his statement," Rumsfeld said.

In a column posted today on CBSNews.com, CBSNews.com Editorial Director Dick Meyer notes that Boykin's comments could cause political problems giving Muslims and Islamic countries free ammo for their jihads, rhetorical and real.

"We don't want the words of an odd general — words that contradict the president, U.S. policy and public sentiment — to harm our cause abroad,'' Meyer writes.

But Meyer concludes that the flap over the general's comments is more of a great story, than a great worry.