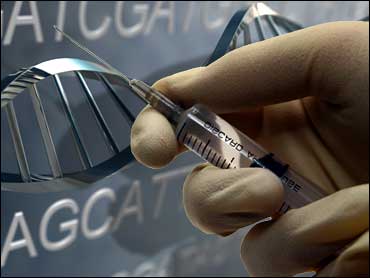 While the men appear disease-free almost two years after the experimental therapy, it wasn't a panacea. Just two of the 17 treated victims are disease-free; 15 other melanoma victims were not cured. So the National Cancer Institute is trying to strengthen the shots.

Still, specialists proclaimed the work, published Thursday by the journal Science, as an important advance — gene therapy with the potential to fight cancer's worst stage, when it has spread through the body. And the cancer institute hopes to begin testing it soon against cancers more common than melanoma, such as advanced breast or colon cancer.

Doctors can't predict how the two men will fare long-term. Melanoma, the most aggressive skin cancer and killer of almost 8,000 Americans annually, is notorious for returning years after patients think they've subdued it.

"I'm cured for now," is how a grateful Mark Origer, 53, of Wisconsin put it after a checkup from NCI doctors this week.

"I had what they call stage 4 of the disease," Origer told CBS News. "Prognosis was approximately about one year."

Oringer, who thought his advanced melanoma would kill him, believed he'd never walk his daughter down the aisle at her wedding. But after the experimental treatment, hea was able to do so.

"I've been given my life back," Oringer said.

"Clearly this is a first step," cautioned Dr. Len Lichtenfeld of the American Cancer Society. "We have to be very cautious about not raising hopes too much."

But, "it is exciting," he added. "It certainly is a proof of concept that this approach will work."

"It's one of the first documented, effective cases of cancer gene therapy working," added Dr. Patrick Hwu, melanoma chairman at the University of Texas M.D. Anderson Cancer Center, who once worked with the NCI team.

The NCI's Dr. Steven Rosenberg has long led the tantalizing research field of how the body's immune system might be harnessed to fight cancer. White blood cells called T-lymphocytes hunt down germs and other foreign tissue. Unfortunately, cancerous cells look a lot like healthy cells, making it hard for those T-cells to spot a problem.

By 2002, Rosenberg had made a breakthrough when he found small numbers of cancer-fighting T-cells inside some patients with advanced melanoma. He literally pulled those cells out of the patients' blood and grew billions more in laboratory dishes, enough to have a chance at overwhelming a tumor. By suppressing the patients' normal immune system to make room for the extra T-cells and then pumping them into their bodies, about half significantly improve.

"Where as a virus or bacteria sets off alarm bells in the immune system, the cancer is barely recognized. The goal of this immunotherapy and gene therapy is to enhance that tiny anti-tumor reaction that the body has, and magnify it so that it can cause destruction of the cancer," Rosenberg said.

But few melanoma patients make enough cancer-fighting T-cells naturally for scientists to cull any from their bloodstream, and T-cells that attack more common cancers are virtually impossible to find. So Rosenberg and colleagues set out to create tumor fighters from scratch.

The scientists took normal lymphocytes — ones that don't recognize cancer — out of 17 patients with advanced melanoma who had exhausted their treatment options. In the lab, they infected those cells with a virus carrying genes that create T-cell receptors, essentially homing devices for, in this case, melanoma. (Different genes create receptors for other cancers.)

"We can take a normal cell from you or me or any patient and ... convert that cell into a cell that recognizes the cancer," Rosenberg explained.

In 15 of the patients, the reinfused, newly armed cells took root and grew at low levels for a few months. But Origer and a second patient grew super-high T-cell levels for over a year, as their tumors gradually faded.

"It's not like chemotherapy or radiation, where as soon as you're done, you're done," said Rosenberg, who is modifying the treatment to better take hold in more patients. "We're giving living cells which continue to grow and function in the body."

Origer had hoped just to survive for his daughter's wedding when he was treated in December 2004. A month later, he recalls, NCI doctors broke into wide grins as they saw his tumors already shrinking. By the time Origer walked his daughter down the aisle last fall, only a small cancerous spot remained visible in his liver, one that surgeons later removed.

"I know how fortunate I am to have gone through this and responded to this. Not everybody's that lucky," he said in an interview.