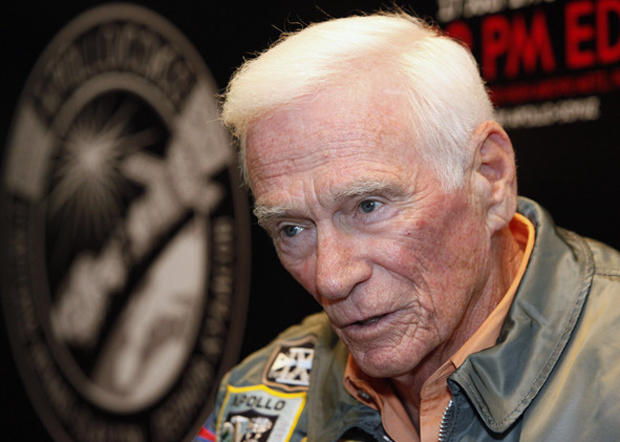 Former astronaut Gene Cernan, a Navy pilot and veteran of NASA’s pioneering Gemini program who was the second American to walk in space and then flew to the moon twice as an Apollo astronaut, died Monday after a long illness. Cernan, 82, was the last human to leave his bootprints on the moon’s dusty surface.

An eloquent and passionate advocate of space exploration long after he retired from NASA, Cernan was a familiar face on television news programs. He was an oft-quoted authority in print and a respected witness in countless Capitol Hill hearings where he frequently testified before committees considering NASA’s budget and other space issues.

A political conservative, he authored a well-received book about his final moon mission, appropriately titled “The Last Man on the Moon,” and starred in an award-winning documentary of the same name.

“Too many years have passed for me to still be the last man to have left his footprints on the Moon,” Cernan says on his web page. “I believe with all my heart that somewhere out there is a young boy or girl with indomitable will and courage who will lift that dubious distinction from my shoulders and take us back where we belong. Let us give that dream a chance.”

Andrew Chaikin, author of “A Man on the Moon: The Voyages of the Apollo Astronauts,” said “of all the guys who went to the moon, Gene really worked the hardest to convey his thoughts and feelings about it to the public.”

“He was really good about doing that in a way that would connect with people,” Chaikin said. “He put a lot of energy into that. He had a lot of strong feelings about where we are and should be, and he wasn’t shy about saying it.”

Cernan is survived by six of the 12 men who walked on the moon during six Apollo missions between 1969 and 1972. The first to walk on the moon, Neil Armstrong, died in August 2012. Cernan was the last.

Born in Chicago on March 14, 1934, Eugene A. Cernan was commissioned in the Navy ROTC program at Purdue University where he earned a bachelor’s degree in electrical engineering in 1956. After earning his wings, he was stationed in California at the Miramar Naval Air Station and subsequently earned a master’s in aeronautical engineering from the U.S. Naval Postgraduate School in Monterey, Calif.

Cernan ultimately logged more than 5,000 hours flying time, nearly all of it in jet aircraft, and completed more than 200 carrier landings. He was one of 14 in the third group of astronauts selected by NASA in 1963.

“Gene in many ways had the persona of the macho fighter pilot,” Chaikin said. “He had the swagger, but he also had a sense of humility.”

Cernan first flew in space as pilot of the Gemini 9 mission, sitting to the right of mission commander Thomas Stafford. The two blasted off from Cape Canaveral on June 3, 1966, and tested a variety of rendezvous and other techniques that would pay dividends in the Apollo moon program.

Cernan became the second American to walk in space during that mission, spending two hours and 10 minutes outside the cramped Gemini spacecraft. The crew then executed a pinpoint landing, splashing down within sight of recovery crews.

For his second space flight, Cernan flew to the moon in May 1969 with Stafford and astronaut John Young, serving as lunar module pilot of the Apollo 10 spacecraft. The goal of the mission was to test the lunar lander during critical of phases of flight as a dress rehearsal of sorts for the Apollo 11 landing mission coming up that summer.

In orbit around the moon, Young stayed behind in the command module “Charlie Brown” while Cernan and Stafford, aboard the lunar lander “Snoopy,” undocked for a variety of tests. They descended to within about 50,000 feet of the lunar surface, surveyed the Apollo 11 landing site and tested the spacecraft’s landing radar and other critical systems.

After releasing the lander’s descent stage, Cernan and Young fired the ascent engine to rendezvous with Young aboard the command module. At that point, the lunar module began a violent rolling motion and viewers on Earth could hear Cernan and Young uttering expletives as they fought to regain control.

It was a close thing, but the astronauts were able to return to the command module, dock and return to Earth, clearing the way for the Apollo 11 mission and Neil Armstrong’s “giant leap for mankind.”

After serving as backup commander for Apollo 14, Cernan was selected as commander of Apollo 17, which turned out to be the last crewed flight to the moon. Ronald Evans served as command module pilot and Harrison H. (Jack) Schmitt, a trained geologist with a doctorate from Harvard, served as lunar module pilot.

The crew blasted off aboard a Saturn 5 rocket at 12:33 a.m. EST on Dec. 7, 1972, the only night launch of the giant rocket ever conducted. An estimated half million spectators jammed area roads and beaches to watch the final liftoff of a piloted Saturn 5.

On their way to the moon, the crew snapped an iconic picture of the full Earth, later dubbed “the Blue Marble,” that became a symbol of sorts for environmentalists, showing the blue-and-white planet floating serenely in the dark of space.

After braking into orbit around the moon, Cernan and Schmitt left Evans behind in the Apollo command module and landed in the hilly Taurus-Littrow valley, touching down on Dec. 11, 1972. The two astronauts carried out three moonwalks, using a go kart-like lunar rover to range about the landing site as they set up experiments, collected rock and soil samples and photographed the unearthly scene.

Some in the astronaut office resented Schmitt’s assignment to the crew, arguing experienced test pilots were more valuable in a risky space mission than a scientist. But Cernan welcomed the geologist to his crew even though it meant his good friend, astronaut Joe Engle, got bumped to a later flight that ultimately was cancelled.

Cernan “threw himself into the scientific training as much as anything else, and he and Schmitt became an excellent, excellent, lunar surface field geology team,” Chaikin said. “Of course, Schmitt had professional expertise, nobody was going to top him when it came to scientific exploration of the moon. But Gene really understood that, and made himself a great companion to Schmitt on the moon, a great field partner who had some good insights of his own.”

But finally, it was time to go, and Schmitt climbed back into the lander first, leaving Cernan on the surface. Before following his crewmate up the ladder to the crew compartment, Cernan took a moment to read from a plaque attached to the descent stage.

“Here man completed his first explorations of the moon, December 1972 A.D. May the spirit of peace in which we came be reflected in the lives of all mankind.”

Cernan then continued: “This is our commemoration that will be here until someone like us, until some of you who are out there, who are the promise of the future, come back to read it again and to further the exploration and meaning of Apollo.”

Chaikin said “Gene was very much aware of that as the last landing. He used to say ‘it’s not the end, it’s the beginning.’”

After working on the Apollo-Soyuz Test Project that followed Apollo, Cernan retired from the Navy and from NASA in 1976. He was active in a variety of businesses and served as a network news commentator during the early years of the space shuttle program.

“Gene Cernan, Apollo astronaut and the last man to walk on the moon, has passed from our sphere, and we mourn his loss. Leaving the moon in 1972, Cernan said, ‘As I take these last steps from the surface for some time into the future to come, I’d just like to record that America’s challenge of today has forged man’s destiny of tomorrow.’ Truly, America has lost a patriot and pioneer who helped shape our country’s bold ambitions to do things that humankind had never before achieved,” NASA Administrator Charlie Bolden said in a statement.

Cernan was a vocal opponent of President Obama’s decision to cancel NASA’s Constellation moon program, a post-shuttle initiative of the preceding Bush administration that called for the establishment of Antarctica-style lunar bases staffed by rotating astronaut crews.

“Frankly, the world’s leading space-faring nation shouldn’t have to pay Russia for rides to the International Space Station,” he wrote. “That’s not only an insult to the hundreds of women and men like me who have built a legacy based on, literally, reaching for the stars, but it also hurts the local economy and puts local jobs at risk at a time when Florida’s unemployment rate is already higher than the national average.”

But writing on his web page, Cernan continued that theme, saying “the U.S. desperately needs to do something to recapture the pioneering spirit that allowed it go to the Moon.”

“America must find a way to instill in its children the desire to launch expeditions into the unknown–to breach what today seems impractical or even impossible,” he wrote. “If I can call the Moon my home long before today’s generation of young adults were even born, then I challenge them and their children to tell me what in their lifetime is impossible.”