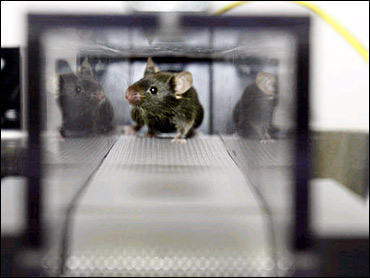 Researchers have unveiled genetically engineered mice that can run farther and longer than their naturally bred brethren, bringing the "genetic doping" of elite athletes a small step closer to reality.

The creation of the so-called marathon mice, announced Monday, follows earlier genetic engineering work that created "Schwarzenegger mice," rodents that bulked up after getting injected with muscle-building genes.

The engineered mice racing away on their treadmills are bound to add to the furor over performance-enhancing substances, just as the world's best marathoners prepare for the Olympic event Sunday.

The gene engineered in these mice essentially mimics exercise: Researchers say it conferred endurance and prevented the modified mice from becoming obese - even when they were kept inactive and fed a high-fat diet.

"This is a real breakthrough in our understanding of exercise and diet and their effects on obesity," said lead researcher Ronald Evans of the Salk Institute in San Diego. "The practical use of this discovery is the implication in controlling weight."

The paper describes how engineered mice, even the couch potato variety, were able to run farther and longer if their "fat switch" genes remain switched on continuously. The engineering also appeared to make them immune to obesity.

Evans found the gene he dubbed the "fat switch" more than 10 years ago, but it is only just now that its broad implications are being understood. Evans now believes his work has implications for just about every disease of the metabolism, from obesity to heart disease.

"This gives us a real lever on metabolism," Evans said.

Of course, nobody cares more about the intricacies of the human metabolism than Olympic athletes - and for better or worse, Evans is bracing for a flood of inquiries from their trainers now that his research paper has been published in the online journal Public Library of Science Biology.

The development fuels speculation by some that steroids, growth hormones and other drugs and chemicals that cheating athletes take could be replaced by hard-to-detect genetic engineering.

Instead of improving times by fractions of a second, the genetically enhanced marathon mice ran twice as far and nearly twice as long as naturally bred rodents.

The engineered mice ran 5,900 feet before quitting and stayed on the treadmill an hour longer than the natural mice, which were able to stay running for 90 minutes and travel 2,950 feet. Evans said he has not seen any adverse side effects in the engineered mice.

Evans expects his research will be of keen interest to the Olympic officials who struggle to keep athletes honest. "It's a bit ironic that we developed these marathon mice at the same time of the Olympics," he said.

Evans and his team made the marathon mice to help them better understand diseases of the metabolism such as obesity and diabetes. The bulked-up "Schwarzenegger mice" - named for buff action movie star and now California Gov. Arnold Schwarzenegger - serve a different purpose: research into muscular dystrophy treatments.

The "fat switch" gene, when switched on, begins the process of creating "fatigue-resistant" muscles while helping the heart and nervous system create endurance.

Humans run and jump thanks in large part to two types of muscle, known as "fast twitch" and "slow twitch." Depending on workout regimens, fast twitch is converted into slow twitch or vice versa.

Sprinters crave fast twitch, which confers speed at the cost of endurance. Marathoners work to bulk up slow twitch for the opposite reason. Elite athletes are continuously probing their muscles to ensure they have the right ratio of fast- and slow-twitch muscles.

Evans' team found that slow twitch converted into fast twitch only when the gene in charge of the process kicked on, which was only when the mice exercised. That is a problem for couch potatoes with Olympic-sized goals.

So Evans took a piece of genetic material known as a promoter, or "gene switch," and injected it into the mice, keeping the gene on continuously. As a result, even the laziest mice increased endurance.

"The enhanced performance of the mouse could translate into human athleticism," Evans said.

There's a big gulf between mice and men, and the field of gene therapy has yielded mixed results over the last decade, including the death of a human subject five years ago.

Still, Evans' earlier work is already being tested in people. The pharmaceutical company GlaxoSmithKline PLC is conducting mid-stage human experiments with a chemical that turns on the "fat switch" in hopes of developing a drug to raise levels of "good cholesterol."

After Evans' latest work was published on Monday, Koenig added a cautionary note: "We do not condone the pharmaceutical enhancement of athletes."