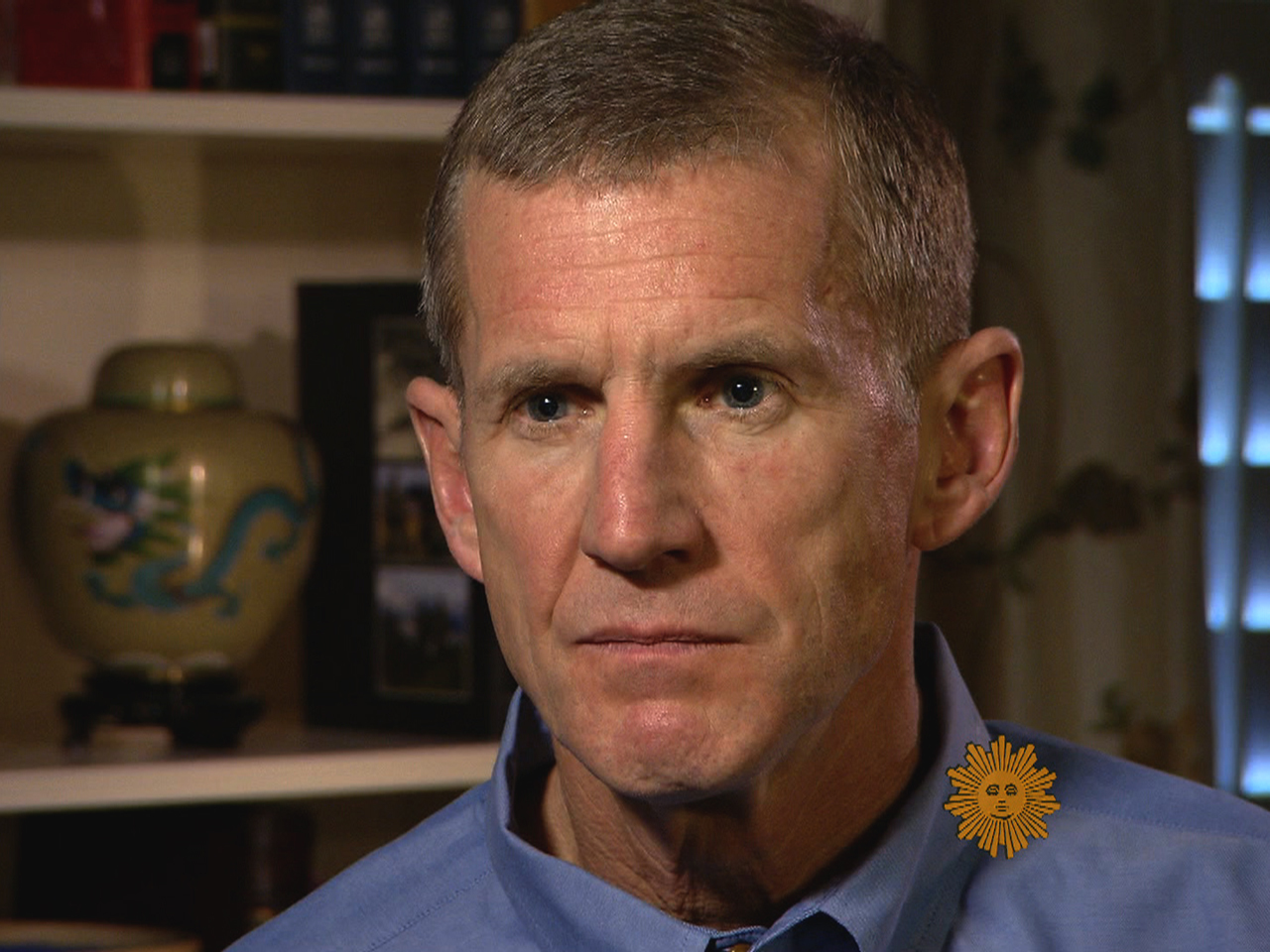 (CBS News) General Stanley McChrystal played a key role in forging the U.S. strategy in the fighting in Afghanistan. You may ALSO recall his well-publicized fall from grace. Gen. McChrystal has written a new book about the good times, and the bad. Here he is with our national security correspondent David Martin:

During his 34 years in the Army, Stanley McChrystal began each day with a run. Now, corporate executives pay good money to jog with him along the National Mall for a lesson in leadership -- from Thomas Jefferson to Abraham Lincoln, who had famously difficult dealings with his generals.

"Lincoln was very involved with his generals, in some cases early in the war, too much so," McChrystal said.

McChrystal had difficult dealings with his own commander-in-chief, Barack Obama, and had to resign as commander in Afghanistan.

But it would be unfair to remember him only for that, because McChrystal was the man who transformed the Joint Special Operations Command into the organization that killed the two most notorious terrorists of the 21st century -- Osama bin Laden, and Abu Musab al Zarqawi, the shockingly ruthless leader of the insurgency in Iraq.

"People would say, 'We gotta fight the war on terror.' And I'd say, 'Forget that. We gotta win the war on terror,'" McChrystal said. "You gotta do whatever it takes to actually bring this thing to a successful conclusion."

In Iraq McChrystal found out it wasn't enough just to send commando teams on nighttime raids to kill or capture terrorists.

"As the violence was rising and we would do operation after operation, very good operations, they would still see the situation deteriorating," he said.

For all their military skills, they were not tapping into the power of information.

"They'd take a bag . . . They'd put the things they had captured -- documents, computers, phones or whatever -- and then send that back with a little note on it, basically. And when I went to look at some of our facilities, I found a room where those bags had just been stacked in there. And they weren't being translated, they weren't being exploited, because we just didn't have the manpower or the expertise."

So McChrystal committed the heresy of bringing outsiders into the world of special operations.

"I would go into rooms and I'd see big commandos sitting across from 22-year-old female intelligence analysts, and the commandos just sitting quietly, as the analyst was the expert. Or, I saw young men, civilian young men come out and they have pierced things all over their faces, which was counter to the culture of special operations, but they brought expertise and equivalent passion. They care just as much as the operators."

Within two years, the number of nighttime raids -- and with it the amount of intelligence exploited -- climbed from 18 a month to over 300.

"We started as a book shop, and by the time we were up and completely built into a network, we were Amazon.com," he laughed. "And our real strength was this network that moved information."

McChrystal's network was clawing at Zarqawi's network, capturing and killing his lieutenants.

"You had to kill a lot of people in order to finally get to Zarqawi. Did you ever wonder if you were losing your humanity?" asked Martin.

"I think every soldier has to ask themselves that . . . The danger of the operators drawing the conclusion that anything is worth to stop Zarqawi is a natural conclusion, but it's a dangerous conclusion, because once you step away from your humanity, then I'm not sure where you are."

"Did you have any cases where soldiers were mistreating the bad guys they captured?"

It happened when they picked up a truck driver who knew where Zarqawi was.

"Some of the operators that worked for me mistreated the detainee. They touched him with a taser several times . . . We found out about it, we punished all four.

"Did the guy in the truck give you a lead to Zarqawi after he'd been tased?" Martin asked.

They finally found Zarqawi by following his spiritual adviser to a house where the terrorist leader was staying. McChrystal called in an air strike.

"I had every expectation that his wife and children were there with him," he said.

"Getting him was just worth the price of killing innocents?" Martin asked.

"This was a man who had not only personally been involved in killing, but had literally precipitated thousands and thousands of deaths in Iraq. His cruelty, en masse, was stunning . . . It was so necessary to stop him, I didn't hesitate."

McChrystal spent nearly five years in Iraq working out of a plywood headquarters. His next combat tour was as top commander in Afghanistan.

"You were the 12th American to take command in Afghanistan in, what, eight years? What does that say about the way we were fighting that war?" asked Martin.

"I think it says a lot," McChrystal said. "Because Iraq had been the main effort or the priority for the American military for a number of years. In fact, Afghanistan had been sparely resourced with talent, with numbers, with technology and what-not."

"Except guys are getting killed."

He convinced President Obama to send in 30,000 more troops, but as McChrystal writes in his memoir, "My Share of the Task," there was an "unfortunate deficit of trust" between the military and a White House wary of being dragged into a Vietnam-like quagmire.

"I was awakened about, I think it was two in the morning," McChrystal said, "and I was told there was a problem, that the Rolling Stone article was about to come out and it was bad. . . . I was completely surprised."

McChrystal and his wife Annie had been celebrating their 33rd anniversary while on a trip to Paris to brief French officials on Afghanistan. They had invited the Rolling Stone reporter, Michael Hastings, to join them for late night drinks with McChrystal's staff.

Annie recalled, "That evening when Stan and I were getting ready for bed, I said to him, 'Wow, I am so glad the reporter saw that evening and got to see what I saw, was just this amazing group of men who have been serving together for so many years and in this fight for so many years, and that kind of connection that they all had to each other."

But the anonymous quotes attributed to McChrystal's staff were devastating, including one about a meeting with President Obama: "The boss was pretty disappointed."

"My whole life, I'd expected that I could get killed in war," McChrystal said. "In my wildest dreams I never once thought I could be accused of anything approaching disloyalty or disrespect."

McChrystal was recalled to Washington to meet with the president face-to-face.

"What did you say to your staff?" Martian asked.

"That they didn't fail. You owe that to them."

He described his meeting at the White House: "I told the president that I would support any decision he made -- if he wanted me to go back or if he wanted to accept my resignation, which I carried with me."

McChrystal added, "There was a girl in that house who had been married to me for over 33 years who I thought I might have let down."

"What he said to me was, 'It's over,'" recalled Annie. "And without even thinking I said, 'Good. We've always been happy. We're always going to be happy.'"

Nine months after McChrystal left the Army, the Joint Special Operations Command which he had transformed into the "Amazon.com of killing" finally got bin Laden.

In his company offices he has a flag the raiders took with them on that mission and later presented to him.

"A lifetime of relationships were built. It meant a lot to me," he told Martin.

"Somebody who knows you well told us: 'Don't let him fool you. He's got a hole in his heart. He'll never be the same,'" said Martin.