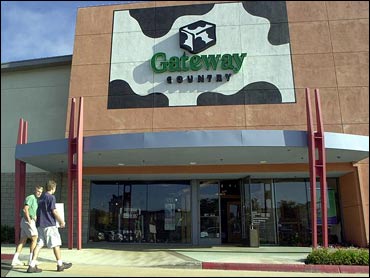 Computer maker Gateway Inc. announced yesterday that it will close all of its 188 company-operated retail stores on April 9 and instead sell its products online and through other retailers. About 2,500 jobs will be eliminated.

"Ultimately we're making this move to improve our competitiveness," he said.

Williams said the decision was influenced by some of the senior management that came to the company through its recent merger with eMachines Inc., which built its success by selling through retail stores. "We're interested in importing best practices -- this is one of those," Williams said.

Gateway began opening its Gateway Country stores in 1996 as a way to differentiate itself from direct-to-consumer rival Dell Inc. Though some industry analysts had praised the move at the time, saying that consumers prefer to try out expensive electronics items before purchasing them, the stores were a money-loser for the company. Gateway Chief Financial Officer Roderick Sherwood conceded as far back as a year ago that the stores had "a ways to go" before becoming profitable.

As a result, the move was not surprising said Stephen Baker, analyst at NPD Group Inc. Gateway "never figured out how to take advantage of the stores they opened," he said.

Tim Bajarin, president of Creative Strategies Inc., a Silicon Valley research firm, said that Apple Computer Inc. has found success with its retail chain because the company "has control of their entire system -- hardware, operating system, applications. They control everything."

"That helps them drive customers into the store for a complete set of solutions," he said. In addition to its own computers, Gateway sold products from other manufacturers, in competition with much larger retailers such as Circuit City Stores Inc. and Best Buy Co.

Gateway's Williams said the company had just finished a $35 million upgrade of the stores to showcase their growing lines of electronics, such as digital cameras and plasma televisions. Gateway has stores in the Washington area, with locations in Springfield, Fairfax, Gaithersburg and Waldorf.

The company has been struggling for years but recently acquired eMachines to become the No. 3 computer maker in the United States behind Dell and Hewlett-Packard Co.

EMachines started as a discount computer seller in 1998; its sales edged past those of Gateway in the recent holiday season.

When Gateway announced the acquisition in January, founder Theodore W. Waitt had no comment on whether the company would close the Gateway stores but said it would "look closely" at the operations.

Gateway originally built its brand on having a down-home image, with cow spots dotting the boxes that its computers were shipped in. Gateway put the cow out to pasture in 2002, though, ditching it for a sleeker image the company hoped consumers would find more sophisticated.

Michael Gartenberg, research director at Jupiter Research, said he was surprised only by the timing of the announcement.

"Can't say that this is a huge shock, though the timeline is accelerated. April 9? That's like a week away."

The Day Vesuvius Blew its Top