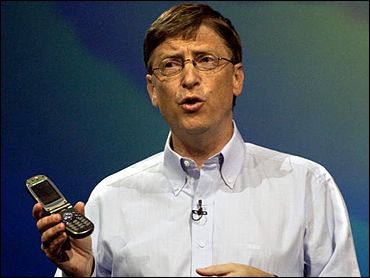 Gates, who was the keynote speaker Sunday at Comdex for the 20th year in a row, also unveiled new software to improve network security, which will be available to customers under a "beta" test program starting in January.

The SmartScreen technology will be used in several products. The technology will use algorithms to judge whether incoming e-mail messages qualify as junk e-mail and filter them out before they get to the end user's e-mailbox, said Corey duBrowa, a Microsoft spokesman.

Gates called spam an economic problem, having proliferated only because e-mail is such an efficient communications vehicle for marketers. "Even if one in 10,000 respond, it is economic for them to send out that e-mail," Gates said.

But technology, along with new laws, can also change that equation, Gates said, according to C|Net. "We believe these new approaches will shift the tide."

C|Net reported Gates spoke to a smaller, more conservative audience than in years past.

The other product focuses on improving the overall security of a network, including simplifying how to keep software up to date and with its security holes patched.

The products fit into Gates' overall discussion of "seamless computing," in which computers and other devices can "talk" automatically and trade data without technological hiccups or security issues.

Such "seamless computing" is happening already on a small level. For instance, cell phone users are able to connect with their e-mail servers to read their messages.

Gates also discussed an improved version of Windows XP for tablet PCs — notebook-like personal computers — due out in the first half of 2004, according to a Microsoft news release. The new version of the operating system will include better handwriting recognition software.

Gates demonstrated Microsoft Research's Stuff I've Seen project, which is developing a tool for rapidly finding material that users have seen — whether it was an e-mail, Web site or document. The tool is not to be incorporated in any products anytime soon, but shows people some of where Microsoft's billions of dollars in research is going, said duBrowa.

A humorous video was also prepared for the address, depicting Gates and chief executive Steve Ballmer in a spoof of the popular futuristic film, The Matrix. Gates took the role of spiritual guide Morpheus who gives Ballmer — playing Neo, the savior — an "innovation pill" to aid him in battling competitors.