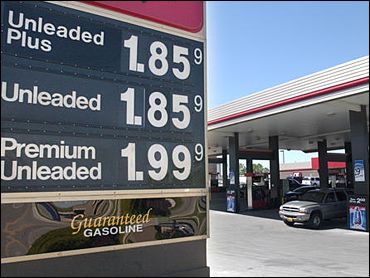 Gas prices have slipped almost 7 cents in the last two weeks in the second dip in prices this year, an industry analyst said Sunday.

The weighted national average price for all three grades of gasoline fell 6.6 cents to $1.97 per gallon Friday after rising more than 59 cents between mid-December and June, said analyst Trilby Lundberg, who publishes the semimonthly Lundberg Survey. The survey regularly polls nearly 8,000 gas stations across the United States.

Lundberg said the recent price drop — which followed another decline two weeks ago — was due in part to oil prices moderating, and to the completion of U.S. refinery maintenance projects undertaken to prepare for summer gasoline demand.

Falling crude oil prices were also a factor. At the New York Mercantile Exchange, crude oil futures set for August delivery ended trading at $37.55 a barrel Friday, down about $1 a barrel from two weeks earlier.

Crude oil prices had been hovering above $40 a barrel in previous weeks.

OPEC's decision to increase oil production in July might bring down oil prices further, but fears of terrorism and sabotage in Iraq and Saudi Arabia may contribute to oil price strength, she said.

OPEC, which supplies more than a third of the world's crude, announced earlier this month it would raise its official daily production quota by more than 2 million barrels to 26 million barrels and, if necessary, by an additional 500,000 barrels on Aug. 1.

However, Lundberg told CBS Radio News that motorists should not expect prices to go back quickly to the cheap levels of a few years ago.

The national weighted average price of a gallon of gasoline at self-serve pumps on Friday, including taxes, was about $2.04 for midgrade and $2.13 for premium.

The most expensive gas in the country was in San Francisco, where regular unleaded sold for $2.27 a gallon, Lundberg said, and the cheapest was in Tulsa, Okla., where gas was $1.69.