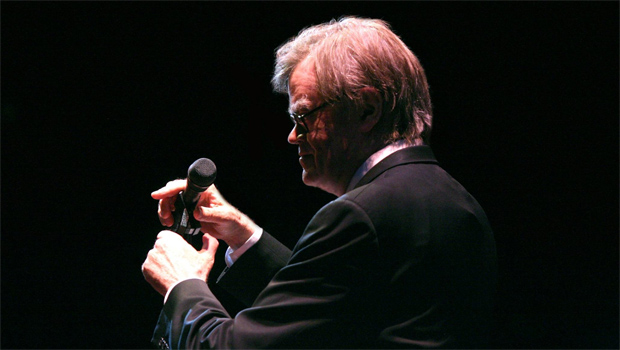 For fans of the radio program "A Prarie Home Companion", news that Garrison Keillor is about to be homeward bound is an adjustment.

That old piano has been an old friend to millions of radio listeners for a long time. But next week, Garrison Keillor will step away from the microphone.

"I'm going to get back to what I intended to do in the first place, which is to be a writer," he said.

"It's Saturday, and the band is playing.
Honey could we ask for more?"

"But you didn't know that radio was your destiny?" asked Pauley.

"Radio was never my destiny," he said. "It just happened. I just got entangled in it. No, I'm a loner. You can tell that by the fact that I never make eye contact."

"I went to Nashville to write about the Grand Ole Opry for The New Yorker," Keillor said. "I really loved Nashville. It was so unbuttoned. All of these wonderful performers -- Porter Wagoner was there, and Minnie Pearl, Roy Acuff. They were all children of the Depression, and they felt so lucky to have whatever they had. And it was really a happy place."

"So I got seduced by that into trying to start my own show."

Keillors says the Midwest that he brings to life on his radio show is the Midwest of his childhood: "And that is receding in the rearview mirror at high speed."

He grew up in Anoka, Minnesota, one of six in a fundamentalist family.

"We had a big radio. It was a Zenith," he said. "We resisted television because my people associated television with Hollywood ... talking about adultery and all of that. But we loved radio. You would lie on the floor on your belly, and you could feel the bass speaker come up through your diaphragm.

"I have never believed any movie I've ever been to in the way that I believed radio when I was a kid. I have never suspended my disbelief in the same way as that strange, amphibious creature, breathing this phelgmy breath as Timmy was whimpering and clutching onto his grandpa with only a screen door between them and sure death. You know, after this word from Ipana toothpaste!"

"This portion of our show is brought to you by the Fear Monger Shop, serving all your phobia needs since 1954."

Keillor may owe his gentle gift for story to his belief that he's on the autism spectrum. Undiagnosed as a child, he was allowed to be himself, a little apart. Noticing, listening ...

"If you weren't high-functioning autistic," Pauley said, "you would've not had the blessings that your childhood gave you, that you are still investing in now as a 73-year-old man."

"Hmm-uhm," Keillor assented. "It takes you a long time to appreciate these strokes of astonishing good luck. I wanted to play football, and so you had to get a physical exam. And I went down to Dr. Mork's clinic. And he put a stethoscope up to my chest and he heard this little click, which turned out to be a mitral valve prolapse.

"So instead of playing football, I wrote about football. No better thing for a kid, than to write about actual things that are happening before your eyes. What a beautiful thing! I was very, very lucky."

And lucky for us -- a speech teacher taught a shy boy how to face his fear of people.

"If you take off your glasses, you can't see them, and they won't look like people anymore -- she said they'll look like flowers on a hillside!" he laughed. "And she was right. And when you learn that you don't have to be afraid of people you can't see, you've taken a step towards broadcasting, you see?"

And now Keillor is stepping away from broadcasting, and eagerly anticipating a life of writing -- a memoir and a screenplay -- and traveling ... or simply strolling down his tree-lined street in St. Paul.

Pauley asked Keillor what is his favorite joke:

He offered: "A man is walking by an insane asylum. And he hears the inmates shouting, '21, 21.' And they sound so happy! And he walks up and he looks through a hole in the fence. And they poke him in the eye with a sharp stick, and yell, '22, 22.'

"I think I have a future in standup comedy," Keillors said. "I really started to hit my stride about three weeks ago."

"I did four shows in four nights. And the course of those two hours, I'm telling you, there were about 40 minutes of helpless, convulsive laughter, during which people were embarrassed because there was stuff coming out of their noses. This is what I aspire to!"

Pauley asked, "Was this before or after the seizure?"

"Luckily it happens when you are asleep, so you're there on a mattress, and you're thrashing. And this dear woman, who married you for other reasons than this, called 911. And a neurologist gives you an IV with this anti-convulsant, and you wake up, and you start to joke around with the people in the ER."

This coming Saturday's broadcast from the Hollywood Bowl will be his last. But the show goes on. Garrison Keillor's successor is 35-year-old Chris Thile.

"It was my choice," Keillor said. "It was not a committee meeting. This was not the result of a beauty contest. He'll do more of a music show because he has talent, you know, which I don't have!"

But we'll miss that voice, and all the others: Powder Milk biscuits, Guy Noir, "The Lives of the Cowboys."

Keillor offered a secret: "You just take a piece of paper and you put it in the corner of your cheek, and you become Lefty."

"Where am I goin'? I'm goin' the same place I've always been. Just down the road and around the corner."

"Will we see you again?"