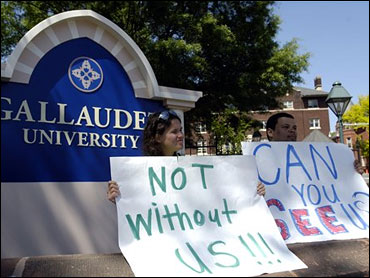 The following is a story about revolutions and their young.

Gallaudet University was founded in 1864 as America's only four-year college for the deaf and hearing-impaired. Located in Washington, Gallaudet grew in importance over the years, becoming a vital resource for the hearing-impaired and a center of what came to be known as "deaf culture."

In 1988, everything at Gallaudet changed.

The university's president retired, and the board of trustees named Elisabeth Zinser, an assistant chancellor at the University of North Carolina, Greensboro, as the new president. Zinser was, by all accounts, a perfectly qualified woman. She was also, as every previous Gallaudet president had been, not deaf. The student body, irate that Zinser had been chosen over two deaf candidates, erupted in protest. They burned her in effigy, took over campus buildings, and shut down the school for seven days.

The Zinser moment sparked what became known as the "deaf-rights movement" and culminated with an amazing showdown: The Gallaudet protesters marched from their campus to the Capitol to the White House to the Mayflower Hotel, where the school's board of trustees was meeting. There, they demanded that Zinser be removed. The trustees capitulated; Zinser resigned. In a further act of capitulation, the man who had been campaigning for the job — I. King Jordan — was installed as Gallaudet's first deaf president. He would lovingly refer to the movement which brought him to office as a benevolent "student revolution."

Jordan's tenure at Gallaudet was successful. As the Washington Post reports, the university's endowment blossomed from $5 million to more than $150 million, and the school began to rake in nearly $100 million a year in federal appropriations. Gallaudet's graduation rate remains relatively low, hovering around 40 percent, but a full 95 percent of graduates now go on to jobs or graduate school, a figure unheard of before Jordan took the helm. Today, the school even has a winning football program.

In September 2005, Jordan announced his retirement. There were tears and celebrations as Gallaudet embarked on a search for his replacement. Last May, the board of trustees voted unanimously to give the job to the school's longtime provost, Jane K. Fernandes, a serious scholar and Jordan's chosen successor. She is also deaf. Within minutes of the search committee's announcement, the school erupted, once again, in protest.

The protests surrounding Fernandes dwarfed the affair in 1988. Students, aided and abetted by some faculty, blocked the main gates of the university and roiled the school until the end of the year. Protesters demanded that Fernandes be fired and that the trustees conduct a new search, with heavy input from the students. It is difficult to pin down exactly the cause of their grief. Complaints ranged from anger that Fernandes wasn't black to criticisms of her personality. It is difficult to find a single substantive criticism of Fernandes, other than the plain fact that many students, alumni and faculty do not like her.

The source of this dislike may be cultural. As Fernandes and Jordan explain, in many circles, Fernandes is considered "not deaf enough." She has been deaf since birth, but she grew up speaking and went to mainstream schools. She did not learn sign language until her early 20s, married a non-deaf retired Gallaudet professor, and has two non-deaf children. It may seem silly, but in the world of deaf identity politics, these things matter. Quite a bit, actually.

When the school year began this fall, the protesters returned to Gallaudet. They erected a tent city and took over the main academic building. The football team got involved. Using physical intimidation, the players helped close down all access to campus and shut the school down completely. At one point, students deigned to allow a handful of professors on campus to attend a meeting. Football players escorted the teachers, herding them in a group to prevent them from going to their offices to work.

Jordan, who does not officially step down from his post until December, has vigorously defended Fernandes, and he has paid a price. Students have disrupted ceremonies honoring him and his wife. One faculty member reported that "students are there saying awful, horrible things" to Jordan and his wife "in front of their grandchild . . . . It was unbelievably vile."

The one-sided antagonism has grown. Bomb threats were made against the school. Petitions asking demonstrators to loosen their grip on campus were circulated, but many were signed anonymously because, according to one professor, students opposed to the demonstrations were being threatened. The head of the board of trustees resigned because of threats against her.

All classes at Gallaudet were canceled, both at the college and at the pre-kindergarten through 12th-grade schools on campus. Likewise, services for members of the deaf community rendered at Gallaudet's audiology clinic were suspended.

The list of ultimatums from the protesters is ever-shifting. At one point it had swelled to 24 demands, including the removal of Fernandes, the resignation of the entire board of trustees, an apology from Jordan, and amnesty for all protesters. On October 14, the school reopened after police arrested 133 protesters, opening one of the access roads to campus. Classes have resumed for now, but the protests continue.

There are lessons aplenty at Gallaudet. The first is to be thankful that we no longer live in 1968, when this kind of mayhem happened all the time. But the more important lesson is that in the long run, giving in to the mob rarely brings either justice or peace.