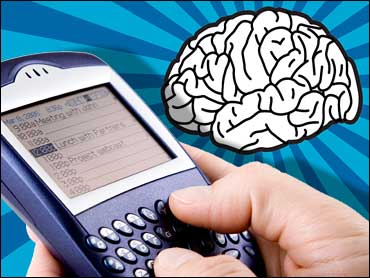 Many mobile phone addicts and BlackBerry junkies report feeling vibrations when there are none, or feeling as if they're wearing a cell phone when they're not.

The first time it happened to Jonathan Zaback, a manager at the public relations company Burson-Marsteller, he was out with friends and showing off his new BlackBerry Curve.

"While they were looking at it, I felt this vibration on my side. I reached down to grab it and realized there was no BlackBerry there."

Zaback, who said he keeps his BlackBerry by his bed while he sleeps, checks it if he gets up in the middle of the night and wakes to an alarm on the BlackBerry each day, said this didn't worry him.

"As long as it doesn't mean a tumor is growing on my leg because of my BlackBerry, I'm fine with it," he said. "Some people have biological clocks, I might have a biological BlackBerry."

Some users compare the feeling to a phantom limb, which Merriam-Webster's medical dictionary defines as "an often painful sensation of the presence of a limb that has been amputated."

"Even when I don't have the BlackBerry physically on my person, I do find myself adjusting my posture when I sit to accommodate it," said Dawn Mena, an independent technology consultant based in Thousand Oaks, California. "I also laugh at myself as I reach to unclip it (I swear it's there) and find out I don't even have it on."

Research in the area is scant, but theories abound about the phenomenon, which has been termed "ringxiety" or "fauxcellarm."

Anecdotal evidence suggests "people feel the phone is part of them" and "they're not whole" without their phones, since the phones connect them to the world, said B.J. Fogg, director of research and design at Stanford University's Persuasive Technology Lab.

In certain circles, phantom vibrations are a point of pride.

"Of course I get them," said Fred Wilson, a managing partner of Union Square Ventures, an early-stage venture capital firm based in New York. "I've been getting them for over 10 years since I started with the pager-style BlackBerry."

For others, it's one more tech irritation.

Jeff Posner, president and owner of e-ventsreg.com in New Jersey, which allows users to register and check in for trade shows and other events, stopped wearing his BlackBerry on his belt because of regular false alarms. He put it in the chest pocket of his shirt but found that was worse, because now his phone dials automatically, which has created a new annoyance: It always calls the same person, he said.

"Phones have favorite friends," he said. "It's like your phones have a thing for each other. Of course, it's a female friend, so my wife is like, 'You're calling her all the time."'

Complicating things further, his own phone is his sales manager's favorite friend.

"Dilbert" cartoonist Scott Adams wrote on his blog, dilbert.org, that he feels the phantom vibrations, "about 10 times per day" and thinks "'Ooh, it's an e-mail with good news!' So far, the only good news is that my pocket is vibrating, and that's OK because it gives me hope that the condition might spread to the rest of my pants."

Jake Ward, a former press secretary for Sen. Olympia Snowe and current director of Qorvis Communications Inc., a public relations company in Washington, D.C., said he switched his BlackBerry from his hip to his jacket pocket six months ago, but still feels it there.

He also claims to "pre-feel" a new message or call. "I'll feel it, look at it. It's not vibrating. Then it starts vibrating," he said. "I am one with my BlackBerry."

For some, it's a matter of projecting hope onto their wireless device. Don Katz said he came out of retirement to work as director of wireline product management at SpinVox Inc. because he was so impressed with the company's voicemail product. He worked on its recent launch at SaskTel, the telecom company in Saskatchewan, Canada. That may be why, on a recent train trip to New York, he kept checking his phone, because he said he was sure it was vibrating.

"It's like, my phone should be ringing," he said. "It's anticipatory vibrations."