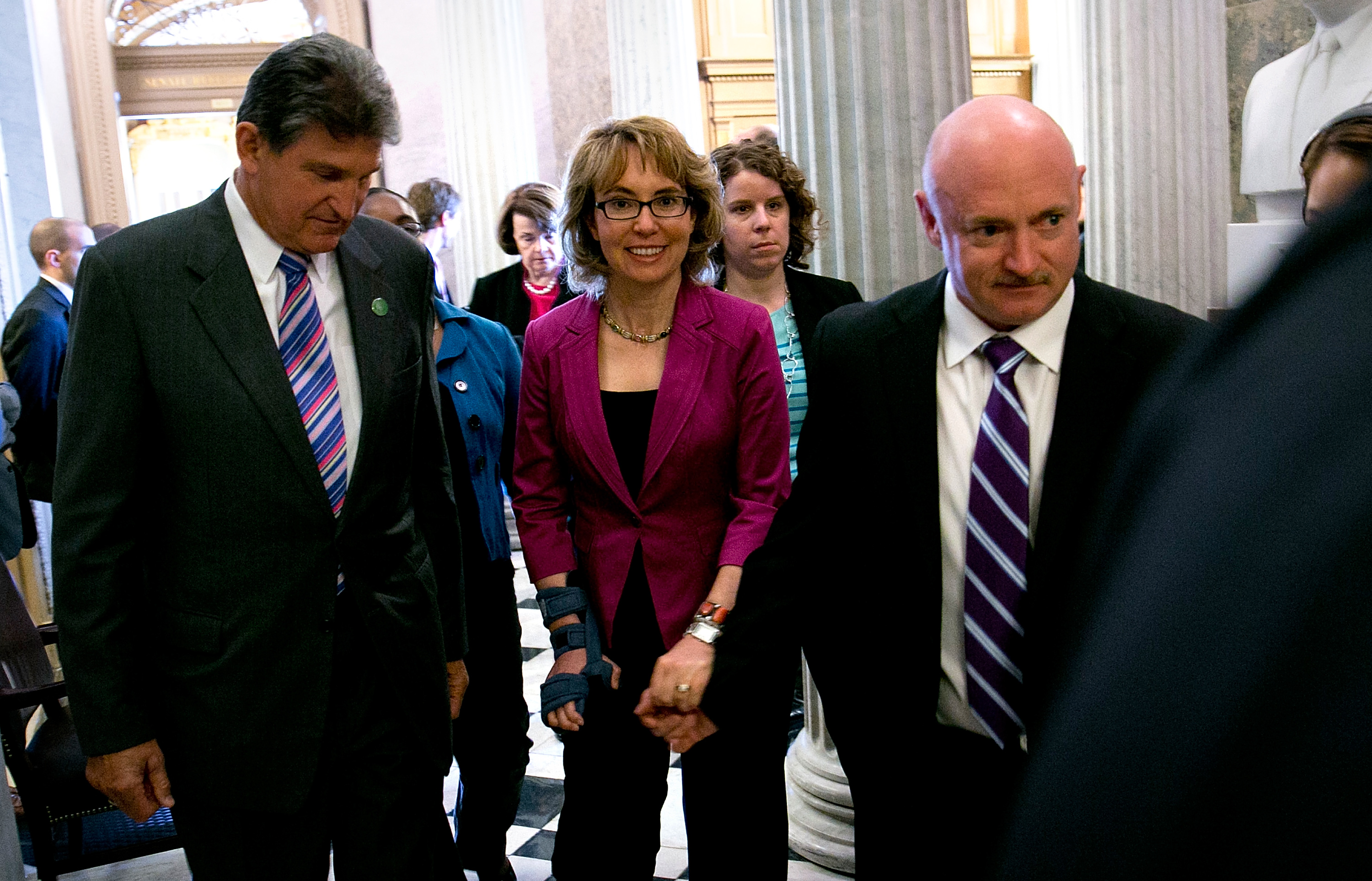 As Senate Democrats scramble to secure the necessary support to push a groundbreaking gun law through Congress, former Rep. Gabrielle Giffords, D-Ariz., returned to Washington today to honor Gabe Zimmerman, an aide who was slain trying to protect her in the Tucson shootings that left six dead.

Giffords and her husband Mark Kelly joined a bipartisan group of lawmakers at the Capitol Visitors Center, where a room was named after Zimmerman. Among those present was House Speaker John Boenher, R-Ohio, an adversary on the gun control debate, as well as Vice President Joe Biden, House Minority Leader Nancy Pelosi, D-Calif., and Rep. Debbie Wasserman Schultz, D-Fla. Kelly, speaking on Giffords' behalf, thanked the lawmakers for attending before praising the people he said were actually responsible for bringing the event to fruition.

"It was your staffs who really made this happen," Kelly said. "In a world where staffs are often admonished for attracting credit... let me formally and officially say on behalf of Gabby and I, thank you."

Kelly, who was standing alongside Giffords and was occasionally interrupted by her brief interjections, paid tribute to Zimmerman's background in social work, his service in Congress, and to his final act of courage.

"It was no surprise for me to learn that immediately after the shooting started, Gabe ran toward Gabby and toward the other victims, toward the shooter and toward danger," Kelly said. "This room will always remind us of his devotion."

In the aftermath of the Tucson shootings, Giffords and Kelly have been at the forefront of the campaign to enact tougher gun laws in Congress, and recently launched a group aimed at counterbalancing the power of the pro-gun lobby. This morning, the two joined Sen. Joe Manchin, D-W.Va., to discuss ongoing efforts to gain support for legislation that would expand background checks for gun buyers.

"I think we'll get there," Kelly said after the meeting.

In the emotionally charged memorial service this afternoon, during which Biden, Boehner, and Wasserman Schultz all grew visibly upset, Kelly didn't shy away from the opportunity to level a pointed message at his political adversaries.

Biden, before honoring Zimmerman, referenced Monday's bombing at the Boston Marathon echoing President Obama's remarks in the aftermath of the tragedy: "We will find out who did this. And we will bring them to justice."

"We also know something about us as Americans. And we know something about Bostonians. That in the most difficult times, it's when we stand closest together," Biden continued. "And it's out of tragedy that we grow stronger. I know that sounds so hollow to say to you now.

"I remember my mother saying, after I lost my wife and daughter, my mother was a gentle, sweet old Irish, not old at the time, young, Irish lady who was compassionate and she said 'Joey, if you look hard enough, something good will come out of everything bad.'

"We will, we will come out of what's happened in Boston stronger and believe it or not, you will be stronger."