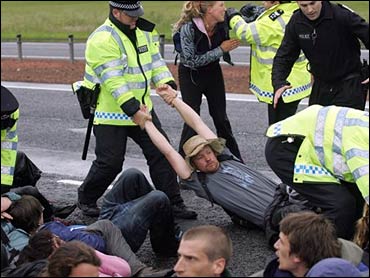 Scottish police on Wednesday said they would allow protesters to march to the edge of the G-8 summit venue, hours after they canceled a planned demonstration following outbreaks of violence.

After talks with organizers, Tayside Police said the march planned by G-8 Alternatives could go ahead. Earlier, police had called off the march in the village of Auchterarder after demonstrators smashed car windows, threw rocks and attempted to blockade one of the main approach roads to the exclusive Gleneagles resort hosting the summit.

The decision to call off the march outraged the protesters. Organizer G-8 Alternatives accused the police of "disgraceful behavior" in denying thousands of people the right to stage a peaceful protest, and insisted they had not been consulted.

"This is a serious indictment of British democracy," said spokeswoman Gill Hubbard.

Keir McKechnie, one of the organizers with G-8 Alternatives, addressed the crowd of thousands. "How dare you tell us that we can't march against the world No. 1 terrorist, George W. Bush?" he said. "We will give them a clear message that we want every troop out of Iraq, we want serious action on climate change, we want all the debt dropped for Africa ... we want reparations for the rape of Africa over the last 200 years."

The protests had caused apprehension in Auchterarder, a village of 4,000 people 2.5 miles northeast of the Gleneagles summit venue.

Earlier in the day, more than 100 activists, many clad in black and covering their faces with bandanas and wearing hoods, streamed out of a makeshift campsite in Stirling in central Scotland, 14 miles southwest of Gleneagles, where some 5,000 anarchists and anti-globalization protesters are staying.

An Associated Press Television News cameraman said he saw a group of about 100 smashing the windows of parked cars and throwing stones at police. Police said some officers were injured, and eight received hospital treatment. Tayside Police said 16 people had been arrested in the Gleneagles area.

Police Chief Superintendent Iain MacLeod said about 60 people had been arrested following the violence in Stirling, and nine policemen had been hospitalized. He gave no details of their injuries.

Traffic was snarled as police closed the M9 highway, the main approach route to Gleneagles from the Scottish capital, Edinburgh.