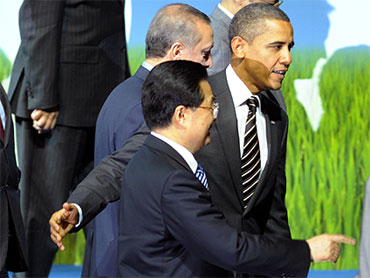 Leaders of 20 major economies on Friday refused to endorse a U.S. push to get China to let its currency rise, keeping alive a dispute that has raised the specter of a global trade war.

At the end of their two-day summit, the leaders of the Group of 20 rich and developing economies - including President Barack Obama and China's Hu Jintao - issued a watered-down statement that only said they agreed to refrain from "competitive devaluation" of currencies.

Such a statement is of little consequence since countries usually only devalue their currencies in extreme situations like a severe financial crisis. Using a slightly different wording favored by the U.S. - "competitive undervaluation" - would have shown the G-20 taking a stronger stance on China's currency policy.

The crux of the dispute is Washington's allegations that Beijing is artificially keeping its currency, the yuan, weak to gain a trade advantage. But the U.S. position has been undermined by its own recent policy of printing money to boost a sluggish economy, which is weakening the dollar.

On the bigger picture, Obama said Friday the global economy was "back on the path to recovery," while he and his G-20 summit partners must work further to resolve differences like the currency spat with China and trade imbalances.

The G-20's failure to adopt the U.S. stand has also underlined Washington's reduced influence on the international stage, especially on economic matters. Obama also failed to conclude a free trade agreement this week with South Korea.

Obama told a news conference that China's currency is an "irritant" not just for the United States but for many of its other trading partners.

"China spends enormous amounts of money intervening in the market to keep it undervalued so what we have said is it is important for China" to follow a market-based system, Obama said. "We have to understand that this is not solved overnight. But it needs to be dealt with and I am confident it can be."

The joint statement avoided the words "competitive undervaluation," which was a reference to China's currency policy that had been inserted into a draft of the statement by officials during pre-summit negotiations.

The dispute over whether China and the United States are manipulating their currencies is threatening to resurrect destructive protectionist policies like those that worsened the Great Depression in the 1930s.

The biggest fear is that trade barriers will send the global economy back into recession. A law the United States passed in 1930 that raised tariffs on imports is widely thought to have deepened the Great Depression by stifling trade.

The U.S. says a higher-valued yuan would make Chinese exports costlier abroad and make U.S. imports cheaper for the Chinese to buy. It would shrink the U.S. trade deficit with China, which is on track this year to match its 2008 record of $268 billion, and encourage Chinese companies to sell more to their own consumers rather than rely so much on the U.S. and others to buy low-priced Chinese goods.

Other countries are irate over the Federal Reserve's plans to pump $600 billion into the sluggish American economy. They see that move as a reckless and selfish scheme to flood markets with dollars, driving down the value of the U.S. currency and giving American exporters an advantage.

Some critics warn that U.S. interest rates kept too low for too long could inflate new bubbles in the prices of commodities, stocks and other assets. Developing countries like Thailand and Indonesia fear that falling yields on U.S. government bonds will send money flooding their way in search of higher returns. Such emerging markets could be left vulnerable to a crash if investors later decide to pull out and move their money elsewhere.

Friday's statement is unlikely to immediately resolve the most vexing problem facing the G-20 members: how to fix a global economy that's long been nourished by huge U.S. trade deficits with China, Germany and Japan.

Exports to the United States powered those countries' economies for years. But they've also produced enormous trade gaps for the U.S. because Americans consume far more in foreign goods and services than they sell abroad.

The G-20 leaders also said they will pursue policies to reduce the gaps between nations running large trade surpluses and those running deficits.

The "persistently large imbalances" in current accounts - a broad measure of a nation's trade and investment with the rest of the world - would be measured by what they called "indicative guidelines" to be determined later.

The leaders called for the guidelines to be developed by the G-20, along with help from the International Monetary Fund and other global organizations, and for finance ministers and central bank governors to meet in the first half of next year to discuss progress.

"We don't have an agreement on what the criteria are, but we agree that there must be criteria," French President Nicolas Sarkozy, who will host the next G-20 summit in November 2011 in Cannes.

The language in the statement was broadly similar to what G-20 finance ministers and central bank governors agreed to last month, though with the new twist of a timeframe for progress.