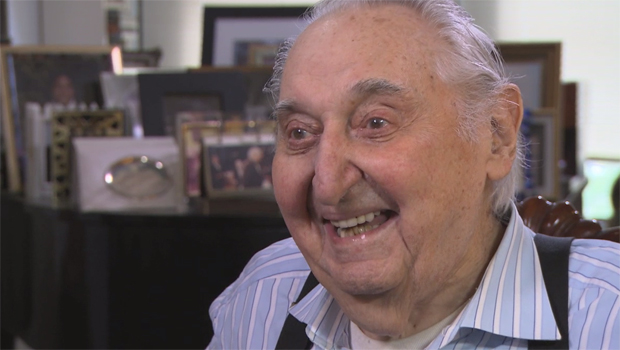 There's no mistaking FINKEL & SONS for a law firm or any such profession No, this group is strictly show business, in the tradition of its irrepressible founding father. Here's Richard Schlesinger of "48 Hours":

He has what no less an authority than The New York Times called "the face that could launch a thousand shticks."

"You know what they say: Jews don't drink. It interferes with their suffering."

It belongs to a man whose name seems tailored for the face: Fyvush Finkel.

"That's my real name!" he said. "Fyvush is my Jewish name. Philip is my American name."

It's hard to imagine "Philip" Finkel having a career like Fyvush Finkel's.

"There was a family, very religious family, they called a matchmaker. And he said to them, 'I have the perfect girl for you. She's so religious that it's a joy --' The kid is getting annoyed and says, 'Never mind all that. I want to know one thing: Is she any good in bed? The matchmaker says, 'Well I don't know. Some people say yes, some people say no ...'"

Not long ago, he was headlining a father-and-sons nightclub act with his kids -- 61-year-old Elliott on piano and 65-year-old Ian on xylophone -- at the nightclub 54 Below in New York.

He's 91 now, and for more than 80 years he's been on one stage or another, on the big screen, and most notably on the small screen in (among other productions) the '90s TV show, "Picket Fences."

He won an Emmy for portraying eccentric lawyer Douglas Wambaugh. Finkel was 71 then; it was the highpoint of a career that started when he was nine.

Fyvush Finkel made his name on Second Avenue in New York, where the great Yiddish theatres stood.

He started singing as a boy soprano: "I got a dollar a night," he laughed. "And I was the hero of the family, making $8 a week, you know?"

By the time he was a teenager, he was a first-rate Second Avenue star, and by his 40s he was one of the highest-paid actors in Yiddish theatre.

"You jitterbugged and sang in Yiddish?" Schlesinger asked.

"Yes, certainly. You take a song - 'I'm gonna dance with a dolly with a hole in her stocking while her knees keep a-knockin' and her toes keep a-rockin'' -- the house came down!"

He had to find work where he could. "I did bar mitzvahs, I entertained at weddings. I did all that, you know?"

But he didn't do it for long. Director Jerome Robbins called him to audition for "Fiddler on the Roof."

"I remember it very well," he said, remembering his audition: "'My friends, we are gathered here together to share in the joy of the newlyweds, Motel and Tzeitel. And everybody says, 'Amen.' And then [tearing up] I have the, 'Let's all sing and think of the people that couldn't attend the wedding.' And they all cry. And I go, 'Enough tears!'"

He got the part. The one-time star of Second Avenue moved uptown, and reinvented himself on Broadway. It was a good run, until the parts dried up.

He learned his lessons well -- learned how to perform for the camera -- and in his fifties reinvented himself again, as a movie actor.

It was his role in the 1990 film "Q&A" as attorney Preston Perlstein that led to his role as attorney Douglas Wambaugh in "Picket Fences" and that Emmy Award.

"Lotta people fight for this," he laughed. "They'd sell their mother-in-law for an Emmy!"

These days his costars are his sons. Each Finkel has his time on the spotlight, but when we sat down with them at Fyfush's favorite haunt, the Second Avenue Deli (of course), the sons knew their roles -- and their father's

"We're not in competition," said Ian. "We try, the two of us, to make the music, you understand? But when he's introduced, he comes on, we fade to the back."

Schlesinger asked Fyvush, "Do you want them to go back?"

"No," he said. "They are not an opening act. It's a family act. We are the Jewish Trapp Family!"

And they sold out when they played together, which is nice.

But one columnist might have seen the real reward for Fyvush Finkel. He wrote, "Here was a slightly-hunched-over 91-year-old man with pants buttoned up to his chest who, as soon as the spotlight fell onto him, transformed into a 30-year-old."

Remembering RBG, a woman who lived a life defying expectations