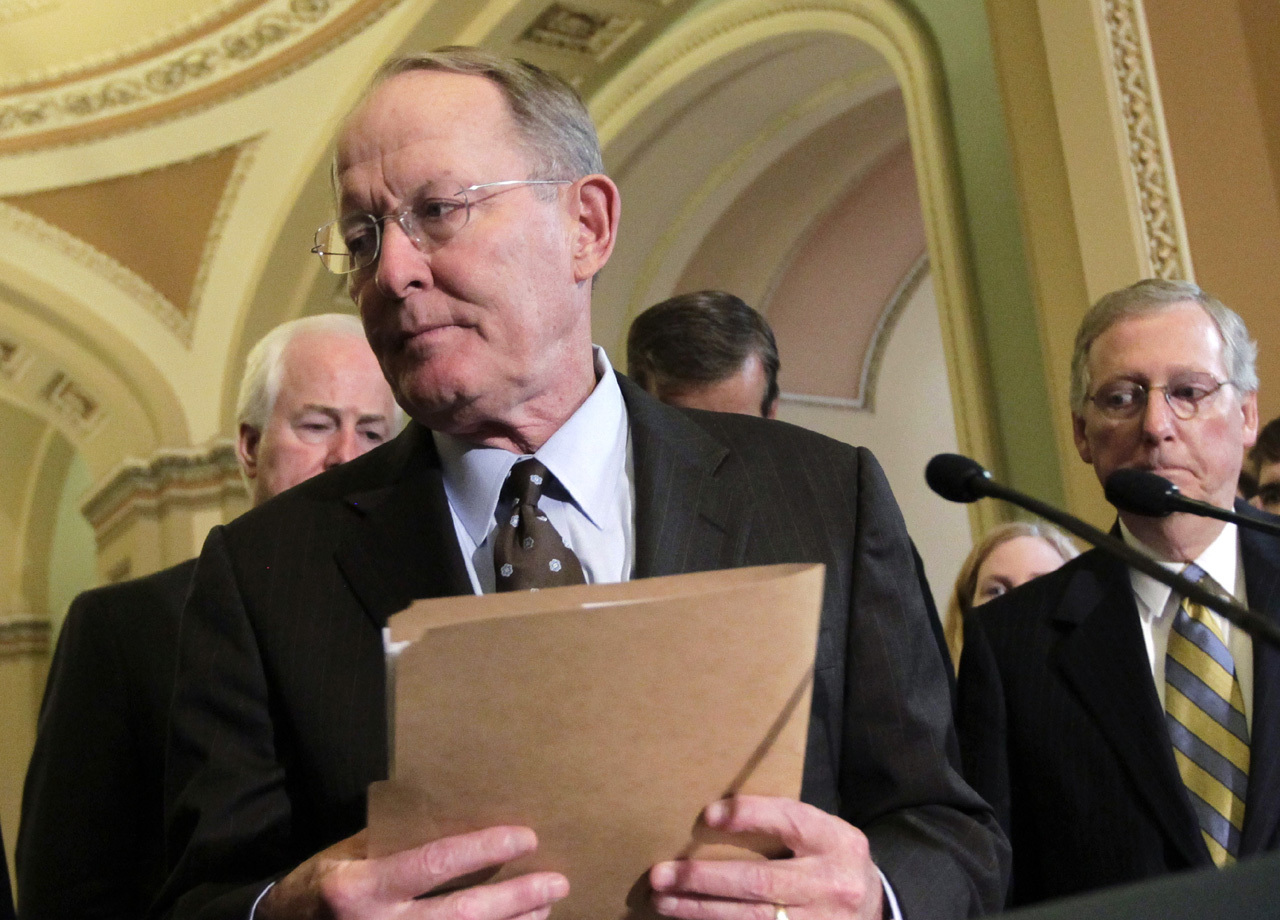 The days of tax-free Internet shopping may soon be coming to an abrupt end. CNET has learned that two Republican senators are preparing to introduce new legislation that would allow states to force Amazon.com and other out-of-state online retailers to collect sales taxes.

Mike Enzi of Wyoming and Lamar Alexander of Tennessee are currently putting the final touches on their bill, which is backed by Wal-Mart Stores, Best Buy, Home Depot, and other companies that are currently required to collect sales taxes. It's a bipartisan concept: a related effort was embraced by Democrats including Sen. Dick Durbin of Illinois a few months ago.

"It's time to close the online sales tax loophole," says Jason Brewer, a vice president at the Retail Industry Leaders Association in Arlington, Va., which represents big box stores. "Amazon and companies like it are no longer fledgling startups."

A Republican Senate aide told CNET the bill would likely appear late this week or next week.

The justification for the measure is a reprise of arguments that state tax collectors have made for at least a decade: they claim that Amazon.com, Overstock.com, Blue Nile, and other online retailers that don't collect always collect taxes are unreasonably depriving states of revenue, and that they enjoy an unfair competitive advantage over local retailers that must collect taxes.

On the other hand, a 1992 Supreme Court ruling says that, in general, retailers currently can't be forced to collect sales tax on out-of-state shipments unless they have offices in those states. And with more than 7,500 taxing jurisdictions, each with its own rules and ability to conduct audits, compliance with each is is not a trivial task.

The Democrat-backed Senate bill says that states that adopted a "streamlined" approach--aimed at simplifying their tax system--can require out-of-state retailers to "collect and remit sales and use taxes."

A recent draft of the Republican Enzi-Alexander bill obtained by CNET appears to be even more pro-big box retailer than the Democratic version. It lets state tax collectors force sales tax collection in some cases, assuming the states centralize some tax functions including audits, without requiring them to go through the more extensive simplification procedures spelled out in the Streamlined Sales and Use Tax Agreement. It also says that any small business with more than $500,000 in "gross annual receipts" can be ordered to collect taxes, a much lower limit than before.

"Opposition will escalate with this," predicts Steve DelBianco, executive director of NetChoice, which counts eBay, Overstock.com, Yahoo, and other Internet companies as members. At least the "streamlined" agreement had a dozen minimal simplification requirements, he says.

Jerry Cerasale, senior vice president of government affairs at the Direct Marketing Association, says that portion of the bill is especially worrisome. "It allows states to require--or as I like to say, conscript--remote sellers to collect taxes without having to join 'streamlined,'" he says. (So does a recent House bill.)

Technically, of course, Americans in states with sales taxes are supposed to keep track of out-of-state purchases and cough up the necessary sales tax on April 15--the concept is known as a "use tax." But state tax collectors have long complained that in practice, that just doesn't happen, and that the money has remained in taxpayers' pocketbooks.

For its part, Amazon.com signaled that it would likely support the Enzi-Alexander bill; it has embraced the idea before (PDF), saying it endorses "simple" national rules. One benefit is that a federal law would also end the legal and political battles it's been fighting in many state capitols, including in New York and California, where it reached a deal in September.

"We believe the sales tax issue needs to be resolved at the federal level and we're working with Congress, the states, and retailers to get federal legislation passed and as analysts have noted, Amazon offers customers the best prices regardless of whether you include or exclude sales tax."

That appears to be a reference to a study by Matt Nemer of Wells Fargo, who compared prices on a wide range of products and found Wal-Mart is about 9 percent to 10 percent more expensive than Amazon, assuming shipping is free and both retailers collect sales taxes. (A recent Bloomberg article emphasized the same point, saying that Wal-Mart's reputation as the cheapest place to shop has "eroded.")

States are currently limited in their sales tax collection authority because of the 1992 U.S. Supreme Court decision in the Quill v. North Dakota case. The justices ruled that retailers aren't required to collect sales taxes from customers who live in states where they don't have a physical presence, or "nexus." They did, however, make it clear that Congress could step in and change the rules.

The ruling came out the way it did in part because tax codes tend to be complex and vary among states and localities, with bewilderingly different tax rates associated with the same kind of product. In New Jersey, for instance, bottled water and cookies are exempt from sales tax (PDF), but bottled soda and candy are taxable. In Rhode Island, buying a mink handbag is taxed, but a mink fur coat is not (PDF).

While Enzi and Alexander are generally viewed as less than enthusiastic about taxes--Enzi receives an "A" grade from the National Taxpayers Union and Alexander an overall "B"--they'll likely pitch their bill as enabling greater collection of existing taxes, not a tax increase.

"It's difficult to understand just what a bill like this intends to achieve--except, perhaps, to motivate states to equalize their tax rates with others and wipe out tax competition," Sepp says. "Federal legislation ought to be encouraging the laboratory of the states to keep humming along, instead of smashing all the test tubes and burning the place down."