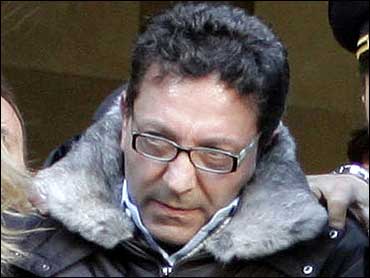 A fugitive Naples crime boss who built one of the most dangerous cartels has been captured, Italian authorities said Saturday.

Police had been following the trail of Edoardo Contini for more than a year and captured him on the outskirts of Naples, the Interior Ministry said.

Investigators believe Contini, who has been on the run since 2000, used alliances with other bosses to keep directing extortion rackets and drug trafficking for the Camorra, Naples' crime syndicate organization.

"Contini had become perhaps the most dangerous boss in Naples," said a statement from Interior Minister Giuliano Amato and Deputy Minister Marco Minniti. The city has been traumatized by several bloody clan feuds.

Contini "built one of the most dangerous and violent cartels," said Francesco Forgione, president of Parliament's anti-Mafia commission.

Contini, 52, might also have been one of the more careful fugitives to try elude capture, according to reports by Italian news agencies.

Contini had his aides buy him new underwear and socks instead of having his laundry washed, the Apcom agency quoted investigators as saying.

Sicilian "boss of bosses" Bernardo Provenzano was captured last year after decades on the run after police followed a package of freshly washed laundry being delivered to his hideout.

Contini communicated, even with those in the same room as him, through handwritten notes, Apcom said, apparently a precaution in case the room was bugged or if telephones used by his family or associates were tapped.

Contini was convicted in 1996 of criminal association for illicit businesses, including clandestine betting operations, the Italian news agency ANSA said. SKY TG24 TV said Contini had also been convicted of killing two brothers and was sentenced to 20 years in prison.

He went missing after he was released from jail while criminal cases against were still in progress, according to news reports.

He is believed to have spent some of his years as a fugitive in northern Europe, including Germany, and to be part of the "cupola," or ruling board, of the Camorra, SKY said.

In recent months, Italian police fighting organized crime have arrested several top bosses of the Sicilian Mafia, including some in charge of extortion rackets.

"We said that we would catch them one by one," Amato's statement said. "That's what we're doing."