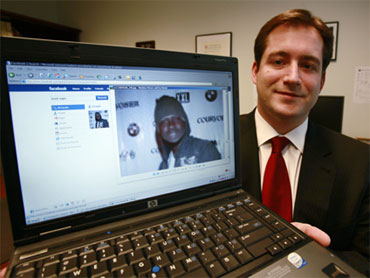 Maxi Sopo was living the dream of a fugitive abroad, kicking back on the beaches of Cancun by day, partying in the clubs by night.

Then he did two things that are never a good idea when you're on the run from authorities: He started posting Facebook updates about how much fun he was having - and added a former Justice Department official to his list of friends.

Because of that indiscretion, the 26-year-old native of Cameroon is now in a Mexico City jail awaiting extradition to the United States on bank fraud charges. Federal prosecutors say he and an associate falsely obtained more than $200,000 from Seattle-area banks and credit unions.

"He was making posts about how beautiful life is and how he was having a good time with his buddies," said Assistant U.S. Attorney Michael Scoville, who helped find Sopo. "He was definitely not living the way we wanted him to be living, given the charges he was facing."

Even in the hold-nothing-back world of social networking, where police search Facebook photos for evidence of underage drinking and watch YouTube videos to identify riot suspects, it's rare that a fugitive helps authorities this much.

In status updates, Sopo said he was "loving it" and "living in paradise."

"LIFE IS VERY SIMPLE REALLY!!!!" he wrote on June 21. "BUT SOME OF US HUMANS MAKE A MESS OF IT...REMEMBER AM JUST HERE TO HAVE FUN PARTEEEEEEE."

Sopo, who came to the U.S. in about 2003, made a living selling roses in Seattle nightclubs until, according to prosecutors, he moved on to bank fraud. He apparently drove a rented car to Mexico in late February after learning that federal agents were investigating the fraud scheme.

Investigators initially could find no trace of him on social networking sites such as Facebook and MySpace, and they were unable to pin down his exact location in Mexico.

But several months later, Secret Service agent Seth Reeg checked Facebook again - and up popped Maxi Sopo. His photo showed him wearing a black jacket decorated with a white lion as he stood in front of a party backdrop featuring logos of BMW and Courvoisier cognac.

Although Sopo's profile was set to private, his list of friends was not, and Scoville started combing through it. He was surprised to see that one friend listed an affiliation with the Justice Department and sent him a message requesting a phone call.

"We figured this was a person we could probably trust to keep our inquiry discreet," Scoville said.

The former official told Scoville he had met Sopo in Cancun's nightclubs a few times, but did not really know him and had no idea he was a fugitive. The official learned where Sopo was living and passed that information back to Scoville, who provided it to Mexican authorities. They arrested Sopo last month.

The fugitive had been living at a nice apartment complex, working at a hotel and partying at Cancun's beaches, pools and nightclubs, Scoville said.

Sopo does not yet have a lawyer, and it was not immediately clear how to contact him.

Prosecutors say he masterminded the bank fraud scheme with Edward Asatoorians, who was convicted by a federal jury in Seattle last week. Testimony at trial indicated the pair persuaded young co-conspirators to lie about their income to obtain loans for fabricated auto purchases, and then used the money to prop up Asatoorians' business and to take an expensive trip to Las Vegas.

Asatoorians is expected to face at least five years in prison when he's sentenced. If convicted, Sopo could face up to 30 years.

Scoville said it was someone who left the department when the Obama administration arrived, and who had been taking some time off and organizing student trips to Cancun.

Facebook was not Sopo's only computer activity during his time on the lam. An affidavit contains details from an instant-message conversation in March between Sopo and a low-level conspirator in the case. Sopo explained that he had fled to "the one safe place where i can actually think."