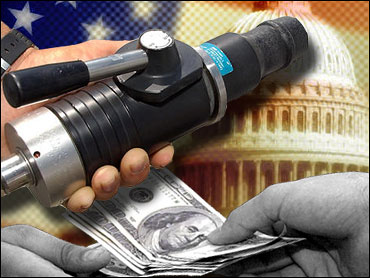 Scientists, inventors and entrepreneurs will be able to vie for a grand prize of $10 million, and smaller prizes reaching millions of dollars, under House-passed legislation to encourage research into hydrogen as an alternative fuel.

Legislation creating the "H-Prize," modeled after the privately funded Ansari X Prize that resulted last year in the first privately developed manned rocket to reach space twice, passed the House Wednesday on a 416-6 vote. A companion bill is to be introduced in the Senate this week.

"This is an opportunity for a triple play," said bill sponsor Rep. Bob Inglis, R-S.C., citing benefits to national security from reduced dependence on foreign oil, cleaner air from burning pollution-free hydrogen and new jobs. "If we can reinvent the car, imagine the jobs we can create."

"Perhaps the greatest role that the H-Prize may serve is in spurring the imagination of our most valuable resource, our youth," said co-sponsor Rep. Dan Lipinski, D-Ill.

The measure would award four prizes of up to $1 million every other year for technological advances in hydrogen production, storage, distribution and utilization. One prize of up to $4 million would be awarded every second year for the creation of a working hydrogen vehicle prototype.

The grand prize, to be awarded within the next 10 years, would go for breakthrough technology.

"Prizes can draw out new ideas from scientists and engineers who may not be willing or able to participate in traditional government research and development programs, while encouraging them, rather than the taxpayer, to assume the risk," said Science Committee Chairman Sherwood Boehlert, R-N.Y.

Inglis said the Department of Energy would put together a private foundation to set up guidelines and requirements for the prizes. Anyone can participate, as long as the research is performed in the United States and the person, if employed by the government or a national lab, does the research on his own time.

He said the prize would not take away funds from any federal hydrogen programs, including the $1.7 billion hydrogen research program that President Bush first detailed in 2003.

The Energy Department announced earlier this year that it would provide $119 million in funding for research into hydrogen fuel cells, including $100 million over the next four years to projects to improve components of fuel cell systems.

Several automakers have made advances in hydrogen fuel cell technology or dual gas-hydrogen engines, but such vehicles are still very expensive and there's no viable infrastructure of fueling stations.