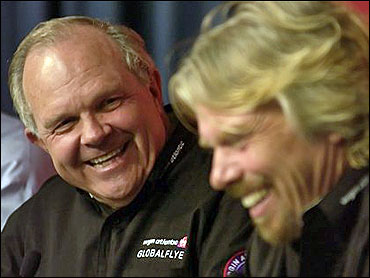 A fuel leak prevented Steve Fossett from taking off Tuesday on his quest to break a 20-year-old record for the longest flight by an aircraft.

Fossett said it was an easy fix that should take 24 hours, but he would not attempt to take off Wednesday because of unfavorable global wind conditions. He said he would likely try later in the week.

"This is disappointing, but we've been through this before," Fossett said.

The problem is in a fuel vent system that had been replaced because of difficulties last year when Fossett was becoming the first man to fly around the world solo, non-stop without refueling.

"We thought we had done the fuel vent system correctly," Fossett said. "This became our ultimate test."

In this adventure, Fossett plans to barrel down the three-mile runway at Kennedy Space Center in the same spindly experimental airplane, the GlobalFlyer. It's a flight filled with perils, including the combustible danger of taking off with 18,000 gallons of fuel in a lightweight experimental plane, as well as sleep deprivation and unpredictable weather.

He hopes to fly 27,012 miles, breaking a record that has held for two decades.

Flying at an altitude of 45,000 feet, the 80-hour journey would take him from the Kennedy Space Center eastward around the world once. Then somewhere over Georgia he will decide whether he has enough fuel to cross the Atlantic a second time and head for a landing outside London.

"I'm not confident of success because of what I'm trying to do," Fossett said Monday at a news conference accompanied by Richard Branson, whose company, Virgin Atlantic, is sponsoring the flight. "We calculate that I will be able to complete the flight and have a success, but it will be very close."

When Fossett does take off, it will be the first time an experimental airplane built by the private sector has taken off from Cape Canaveral.

"This plane is hoping to fly further than any plane, any balloon, anything that's ever flown before," he said.

Fossett used the same glider-like plane with the 114-foot wingspan in March, when he became the first person to fly solo nonstop, without refueling, around the globe in 67 hours. During the takeoff, he lost 3,100 pounds of fuel from the leak but still landed with a reserve of 1,500 pounds of fuel.

The amount of fuel left over made Fossett realize that the plane hadn't flown to its full capacity and wasn't ready for retirement to the Smithsonian National Air and Space Museum.

Eating during the flight will be easy, Fossett said, but not sleeping.

The plane is equipped with a parachute pack holding a one-man raft and a satellite rescue beacon, just in case.