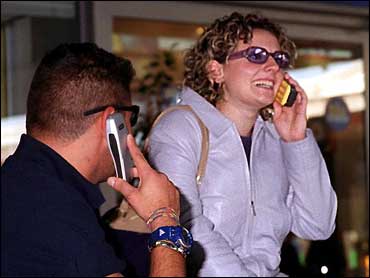 Some shields touted as protecting cell phone users from radiation don't work as advertised and may cause the wireless devices to emit even more energy, the Federal Trade Commission said Wednesday.

The agency announced it had filed charges against two companies for promoting the shields with unsupported claims such as "prevents electromagnetic waves from penetrating the brain" and "blocks up to 99 percent of the radiation" emitted from cell phones that some fear could cause brain cancer.

But cell phones emit most electromagnetic energy from the antenna and other parts of the phone, not the earpiece, the FTC said. The companies don't mention that their devices won't stop that sort of radiation in their advertisements, the FTC said. Shields may also interfere with a phone's signal, causing it to draw extra power and emit more energy.

"There is no scientific evidence that their products work as they claim," said Howard Beales, the FTC's director of consumer protection. "These companies are using a shield of misrepresentation to block consumers from the facts."

Last year, congressional investigators reported that current research doesn't show the energy emitted by cell phones is harmful, but "there is not yet enough information to conclude that they pose no risk."

The report from the General Accounting Office said long-term studies now under way may offer firmer answers, but it will likely be years before it is known for sure whether cell phones are a health risk.

But even if there is a danger, cell phone shields are not the solution, Beales said.

The agency said cell phone users who want to limit exposure to electromagnetic emissions should limit cell phone use, use a hands-free headset and avoid using cell phones where the signal is weak.

The number of cell phone subscribers has surged to more than 131 million, according to the Cellular Telecommunications and Internet Association, the leading industry trade group.

"Companies are creating and exacerbating public fear to create a market for their product," Larson said. He said the shield products are not subject to government review and manufacturers often cite isolated research reports that don't reflect most scientific findings on cell phone safety.

The companies named in the FTC's complaint are Stock Value 1 Inc., of Boca Raton, Fla., and Comstar Communications Inc., of West Sacramento, Calif. In the complaints, filed last week in Florida and California, the government said it wants to shut down the companies and have them give refunds to customers.

The companies could not be reached for comment and their lawyers did not immediately return calls.

Both companies advertised through television, radio, print ads and the Internet, making false claims about scientifi proof backing their products, the FTC said.

The Stock Value 1 promoted products called "SafeTShield" and "NoDanger," both metallic fiber patches for placement over cellular and cordless telephone earpieces, the FTC said. Comstar described its "WaveShield 1000" product as about the size of a penny and able to block "radiation entering the soft tissue of the ear canal."

The Good Housekeeping Institute, a consumer-testing facility, found in November 2000 that the devices did not significantly block radiation waves and referred the companies to the FTC.