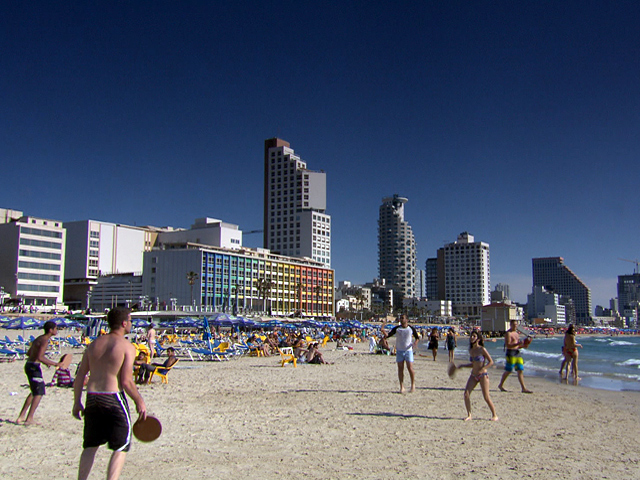 (CBS News) To live in Tel Aviv is to make a choice. With a history of bloodshed and bombings, the inhabitants of Israel's largest city could live in fear of what could come next. Or they could live for the moment in a sun-filled, dynamic city that is becoming renowned worldwide for its booming high-tech industry and lots of great night life. Bob Simon travels from the bars to the beaches of Tel Aviv to examine how Tel Avivians live their lives.

The following script is from "Tel Aviv" which originally aired on May 20, 2012. Bob Simon is the correspondent. Michael Gavshon, producer.

We went looking for a place of calm in the Middle East -- a place not racked by violence, anxiety, torment. Not an easy mission these days. But we found one in the unlikeliest of spots: Israel's largest city, Tel Aviv, bordered on all sides by danger.

Tel Aviv has been through rough times over the decades. Bloodshed, bombings, scud missile attacks. And today the situation looks dicier than ever. Revolutions, civil wars, Islamic extremists are just a few hours drive away in every direction. And if Iran ever builds that bomb, Tel Aviv will be well within range. So anything could happen. Anytime. But somehow, Tel Avivians have learned how not to worry about tomorrow. For them, the only time is now.

And the best place to spend now -- 12 months a year -- is the beach. You would be forgiven for thinking this is Miami on the Med, thousands of miles from the madness of the Middle East.

Ron Huldai: This is an island of sanity in this country.

Bob Simon: An island of sanity?

Ron Huldai: The island of sanity.

Bob Simon: In this country and in the Middle East.

Ron Huldai, who fought as a fighter pilot in three wars, has been mayor of Tel Aviv for 13 years. He just started a bike share program.

Ron Huldai: This is our life. What else we can do? When you go out of your home in New York, you have the chance to get a car accident.

Bob Simon: Yeah, you have a chance to get a car accident. But you know that New Jersey doesn't have missiles pointing at you.

Ron Huldai: But in life, there are a lot of risk. Always.

Always. Iran today, Iraq yesterday. During the first Gulf War, Saddam Hussein rained scuds on the city. Soon after that, the streets of Tel Aviv became killing zones as Palestinian suicide bombers blew up buses and cars and clubs. But the bombings didn't stop Tel Avivians from going to the beach by day and the bars by night. Arik Kneller lived through it all.

Bob Simon: Do you ever feel like you're dancing on the Titanic?

Arik Kneller: Sometimes. Sometimes. Maybe part of the reasons people dance on the tables is because they really believe that tomorrow Tel Aviv is going to be attacked. And they really do live as if it's the last day of Pompeii. And they want to grab every second of it.

And many do. There are more bars than synagogues in this city of the Jews. And remember, Tel Aviv is not that far from where Moses came down the hill with those commandments.

Tel Aviv wasn't always a latter day Sodom. Twenty years ago, Tel Avivians were in the vanguard of the peace movement, cheering Israeli Prime Minister Yitzhak Rabin on as he shook hands with Palestinian leader Yasser Arafat at the White House. Negotiations began...but then stalled so the activists went home and retreated into apathy.

Bob Simon: Years ago people in Tel Aviv were passionately political. They're not anymore. What happened?

Bob Simon: People have said to me that they've become numb.

Gideon Levy: There's no political debate in Israel. There's no debate almost about anything.

Gideon Levy is a columnist with one of Israel's leading newspapers.

Gideon Levy: It's all about the next vacation, the next Jeep, the next restaurant. And the good life in Tel Aviv enables you to ignore the real questions.

Bob Simon: Is it bad taste to bring up politics at a dinner party?

And when the economy is booming. The recession has passed Tel Aviv by. There is low unemployment. Everyone can afford the basics, but there are wide income gaps in what used to be a fairly egalitarian society. Property prices have soared -- more than 70 percent in the last three years. Rentals are so high it's said a starving artist doesn't even have a place to starve.

But for the elite -- and there are more of them every year -- life can be glorious. Wealth is rampant. And Yossi Vardi has it. He owes it, he says, to making a modest investment in an idea proposed by his young son. They called it instant messaging.

Bob Simon: That was the foundation, wasn't it?

Yossi Vardi: It was early, it was pioneering, it was successful. Then after 18 months, AOL came and bought the whole company.

Bob Simon: How much?

Vardi is now called the godfather of what has become a vast software empire. Tel Aviv, this startup city, has more hi tech startup companies than anywhere outside Silicon Valley. It is so far ahead of the curve, you can barely see the end of it.

Bob Simon: Why does Israel have so many startups?

Bob Simon: What do you say?

Yossi Vardi: I say it's a cultural phenomena and the secret source behind it is the Jewish mother. Every startup kid here has a Jewish mother which drive him crazy, which will push them and challenge them and inspire them.

And inspire young people from all over Israel and the world to flock here for the good life. Lonely Planet, that hip travel magazine has voted Tel Aviv the third hottest city in the world, complete with cops patrolling on roller skates and city officials giving interviews in places where American politicians wouldn't dare to be seen. Outside a trendy bar, we ran across Tel Aviv's Deputy Mayor Asaf Zamir.

Bob Simon: What are you drinking?

Asaf Zamir: This is vodka soda because I'm on a diet.

Bob Simon: And there aren't any people who would be watching you on television and saying what the hell is our deputy mayor doing drinking outside a bar at two in the morning?

Asaf Zamir: This is what I'm supposed to be doing. I've done this-- I've been doing this before I got elected. This is my way of life and most of the young people in Tel Aviv-- we go out every evening. And I think the people that vote for me will find it fine.

Tel Avivians love to think of themselves as avant-garde. The arts scene is vibrant. New openings every week. Fashion is cutting edge, along with music and dance and theatre. And compared to the rest of Israel, Tel Aviv is not only more cosmopolitan, but more tolerant. People seem to get along. Religious and secular, soldiers and civilians, straights and gays. In a poll published this year, the city was voted the best gay destination in the world. Those old closet makers are going out of business and that's just fine with actress Noa Tishby.

Noa Tishby: It's such a non-issue in Israel. That's the thing, being straight, or being gay is a complete non-issue. I mean gays in the military, what's the problem?

All Israelis, men and women, are drafted into the army when they're 18. Gal Uchovsky did his three years service in the late 70s. Today, he is a gay activist and a columnist for one of Tel Aviv's hippest magazines.

Bob Simon: In many parts of the world, parents, definitely including Jewish parents, are not happy when their kid turns out to be gay. Is it the same here?

Gal Uchovsky: No. Here it's a little different because, you know, Israel is a war zone. It's been a war zone for many years. It's very hard to raise a child here. They can die in the army. They can die in a suicide bombing. So the whole feeling of an Israeli parents is that it's-- it's a big war to keep your kid alive 'til 21. So if at 22 you come-- or any age, he comes and says, "Okay, I'm gay," you know, it's not that bad.

And that chronic war continues. The very week we were there, in the bubble of safety that is Tel Aviv, less than an hour away, Palestinians and Israelis were going through their rituals on the occupied West Bank. Rituals which have been going on for decades and are as routine as a dinner and a dance downtown.

Gideon Levy says that for Tel Avivians the West Bank could be on another planet.

And Levy says they've succeeded. He is one of the very few Israeli civilians who has any contact with Palestinians. He covers the West Bank for an Israeli newspaper. And every day, when he gets back to Tel Aviv from the occupied territories...that's when he's reminded that he lives in a bubble.

For the most part, Tel Avivians have become fatalistic. Many feel there's just not much they can do about anything. The Arab Spring, Palestinians, a nuclear Iran. There's a lot of uncertainty now, of course. But that's all there's ever been here. Uncertainty.

Bob Simon: Do you ever worry that this will still be a home for your great grandchildren?

Yossi Vardi: Look, I will not tell you that everybody's sitting here like an idiot, don't worry about the future. We have this damn conflict that I hope we will finish one day. And I hope we will do peace. But in the meantime, look what we created.

Yossi Vardi: I don't like it here. I am addicted to this place. Not only like, I love it.