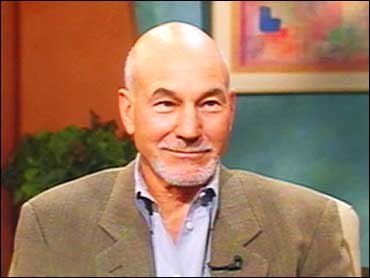 Patrick Stewart may have one of the most recognizable bald heads in the movie business today.

And now he gets to reprise one of the most famous bald-headed characters in comics.

The actor is best known for playing Captain Jean Luc Picard in one of the biggest franchises in television and movie history, "Star Trek." Stewart now returns to the role of another character partly known for his chrome, Professor Charles Xavier, in the sequel to "X-Men."

Stewart visited The Early Show to discuss the new movie, "X2: X-Men Unite" and the challenge of doing a sequel to a commercial success.

The classically trained Shakespearian actor said "X2" is larger in scale. "I don't know how much the studio would want me to say. But I believe the movie may have cost between $140 million and $160 million. And with promotion it may very well be the first $200 million movie."

The film will open everywhere in the world at the same time. "Which will make it the biggest single-day opening of any movie in the history of the world. Just a little bit of trivia," Stewart said.

Ashlee's Social Slip Did Her In

He is confident "X2" will resonate with audiences because it continues the morality play that the first film introduced.

"X-Men" and "X2" were inspired by the comic book "X-Men," which tells the story of a school for gifted youngsters. The institution is founded by the world greatest telepath, Professor Xavier.

Children of the school are born with advance strength, mental capabilities, and other powers, and Professor Xavier tries to teach his students to control their skills while sheltering them from a world afraid of these "mutants."

A few of the students and their care-takers are chosen by the wheelchair-bound Xavier to use their powers for the greater good of mankind — fighting to protect a world that fears them.

In "X2," the X-Men must unite with their foes to combat a more dangerous enemy that threatens everyone.

Stewart says that there is seriousness about retaining the quality of the original material, and he is sure audience will be crying for more from the potential movie franchise.

Doing this movie, he said has afforded him and friend Ian McKellen, who plays Erik Lehnsherr, Magneto in "X2" and Gandolf in "The Lord Of The Rings" to work now on plays.

"Ian is doing Strindberg, I'm doing Ibsen. They're not known as big box-office writers. But that we will pull into our audience to see these plays, an audience who might otherwise never have thought have going to see Ibsen. They go to see Professor Xavier, they go to see Captain Picard; they go to see Gandolf. It doesn't matter why they come. And both Ian and I are somewhat smug about that aspect of it.

Some Facts About Patrick Stewart