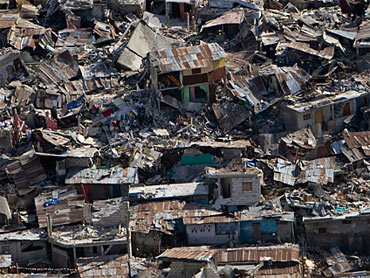 Dr. Barth Green has worked with the Haitian community for 20 years.

The University of Miami School of Medicine professor's team was the first to arrive in Port-au-Prince the day after last month's horrific earthquake. Green and his team go back every Friday through Sunday.

He tells "The Early Show" co-anchor Harry Smith that, as devastating as the temblor was, it actually left Haiti with a chance for a new beginning, one with much more promise than the pre-quake nation held for its people.

The situation, Green said, defied description when his team got there. "If you can take a large city in this country of millions of people and imagine they have no housing, no food, no water, no medical care, literally, except for little spatterings, that's what you'd have to imagine," he said. "It's beyond humanity."

"We're just finishing the resuscitation of Haiti," he continued, "and now we have to really look at rebuilding, because there's not a building standing that shouldn't be torn down and, most of the buildings, the ceilings are in the basement. So it's just beyond belief.

How to Help Victims
Complete Coverage: Devastation in Haiti

"In addition to the over 100,000 deaths, there's more than that people who are seriously injured and need care: They need artificial limbs, they need surgeries. And the baseline that we started with was millions of people who have chronic diseases, diabetes, hypertension, HIV, TB, and there's no treatment available right now.

"So, we really need to step up as Americans, and as the world."

Green says the "initial shock of seeing the body bags and the tremendous carnage was overwhelming, and everybody cried, and couldn't stop. But I think now we're looking at it as a window of opportunity not to rebuild Haiti, but to rebuild a different Haiti, one that has opportunity, that has the technology and the jobs and the micro finance, the education, so that it can be different. It shouldn't be built where the fault of the earthquake was. It should be built throughout the countryside."

He urged Americans to continue unrelenting relief efforts, pointing to "the tremendous dignity and stoicism of the Haitian people -- they almost accept death and amputations, and they're sill smiling and saying 'Thank you,' (even) when they're in excruciating pain. That's why I'm there and that's why the American community is committed to sustainability, infrastructure and long-term commitment."