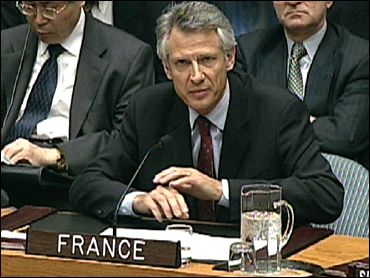 In a letter to the U.S. government this week, France accused American media of mounting a misinformation campaign against Paris, and said some of the false allegations were leaked by American officials.

Foreign Minister Dominique de Villepin has said that his government would take an inventory of press accounts about France with plans to show they are untrue.
The United States has denied leaking such information, but de Villepin suggested on Friday that France was awaiting a fuller response.

"We wanted to have some clarifications from our American friends," he said in Paris. "We are witnessing a campaign, numerous articles that are lies, sometimes calumnious."

The letter by Ambassador Jean-David Levitte was sent to Bush administration officials and members of Congress.

Among stories cited in the letter were alleged French weapons sales to Iraq and a report last week that French officials provided passports to Iraqis trying to escape the U.S.-led invasion. Levitte called these reports "denigration and lies."

In an earlier interview with France Inter radio, de Villepin said that British media, too, had carried disinformation. He did not say whether he thought such information had been provided by the British government.

The tiff was the latest episode in months of tensions between Paris and Washington. Relations have been on a downhill slide since Paris took the lead in opposing the U.S.-led war in Iraq.

De Villepin was on the front line in the dispute over the war, arguing the French case at the U.N. Security Council.

The foreign minister, however, said that he hoped for a healing of the trans-Atlantic rift.

"We are allies, we are friends, and it is important that we work together in a spirit of responsibility, in a spirit of clarity, of friendship and of truth," he said.

CBS News obtained a copy of the letter sent to members of Congress, in which France claims anonymous information from the White House added to negative reporting on France.

Letter from Jean-David Levitte, Ambassador of France to the US, to the Congressmen, Administration Officials and Media representatives

For more than two hundred years, the United States and France have been friends and allies. But for several months, some members of the American media have issued false accusations against France.

The most serious of these accusations share the following characteristics:

- They spread false information
- They all rely on information from "anonymous administration officials."

A list of some of these allegations is attached to this letter (click here) . I would like to draw your attention to the troubling-indeed, unacceptable-nature of this disinformation campaign aimed at sullying France's image and misleading the public. The methods used by those propagating this disinformation have no place in the relationship between friends and allies, who may disagree on important issues but should not engage in denigration and lies.

Our friendship is a treasure. It must be protected. In this dangerous world, we must continue to work side by side against the scourge of terrorism, the proliferation of weapons of mass destruction, and for the promotion of peace and our common values. Terrorism is the most important threat that we have to face today, as the deadly and cowardly attacks in Saudi Arabia have once again proven. We should not let bitterness between two staunch allies distract us from the fight against terrorism. France is determined to continue to work with the United States in a spirit of good will on all these issues.

In transmitting this information to you, I hope to help put an end to these useless polemics. I hope that this information will be useful to you and I remain at your disposal to discuss this issue in greater detail should you wish to do so.

1. September 1-15, 2002: In its "Week in Review" section, The New York Times published an article entitled "Psst... Can I Get a Bomb Trigger?" alleging that in 1998, France and Germany had supplied Iraq with high-precision switches used in detonating nuclear weapons.

The Embassy issued a denial, which was published the following week in that section's Letters to the Editor column, noting that a French company had indeed received an order for 120 switches, presented as "spare parts" for medical equipment but that the French authorities had immediately barred this sale and alerted both Germany and the country that had previously sold the equipment that incorporated the switches.

2. On November 5, 2002, the front page of The Washington Post carried a story entitled "Four Nations Thought to Possess Smallpox." According to this article, France, along with Russia, Iraq and North Korea, possesses prohibited human smallpox strains. This "information" was purportedly given to the Washington Post by an "American intelligence source," who mentioned the existence of a "report" on this subject.

At the Embassy's request, the Post subsequently published a rebuttal from the Embassy Press Office noting that France abides by WHO provisions and by its own national regulations prohibiting the possession of human smallpox strains.

On March 8, the two companies named in the story formally denied these allegations, as did the Embassy, which had already given a categorical reply to the question put to it by the reporter. On March 10, the Foreign Ministry deputy spokesperson reiterated the two companies' denial, adding that the French authorities had never authorized the export or re-export of such spare parts and strictly respected the arms embargo and Security Council resolutions. That denial was published, which did not prevent the Washington Times from regularly referring to this case.

4. On March 13, New York Times columnist William Safire began a series of articles entitled "The French Connection" in which he claimed that France had permitted the delivery of sensitive equipment to Iraq. According to him, a French intermediary had facilitated Iraq's acquisition, through Syria, of chemical components for long-range surface-to-surface missiles. Safire asserted in the same article that "he had been told" that the Société Nationale des Poudres et Explosifs had signed a contract in April 2002 to provide Iraq with five tons of dimethyl hydrazine, a chemical that can be used for missile propulsion.

The Foreign Ministry spokesman denied these allegations on March 14, noting that it had neither delivered nor authorized the delivery of such products, either directly or indirectly. In his interview with CNN/CBS, President Chirac expressed himself most clearly on this subject. Although he no longer mentioned the SNPE after that, Safire nevertheless continued his attacks in two successive columns. Moreover, The New York Times never published the Embassy's rebuttal to these charges nor took the trouble to answer the letter the French Ambassador personally sent them on this subject.

Needless to say, France fully complies with the UN sanctions against Iraq, including a ban of all weapons sales.

6. On April 21, Newsweek reported the "possible" discovery of Roland 2 missiles by coalition forces in Iraq and implied that they had been manufactured in 2002. A charred Roland 3 missile launcher was also allegedly found.

Once again, the Ministry spokesman had to specify that France had sold no military equipment to Iraq since the summer of 1990 and that it was furthermore impossible for Roland 2s to have been manufactured in 2002, given the fact that they were not manufactured after 1993. This information had in fact been communicated to the author of the article, who made very limited use of it.

7. On May 6, The Washington Times once again attacked our country, indicating that according to an "anonymous American intelligence source," France had helped wanted Iraqi leaders to escape to Europe by providing them with French passports.

Although the author of that article did call the Embassy and included our denial in his article, he nevertheless referred to this supposed "scandal" three times in the following days. The fact that the Foreign Ministry's spokesman issued a categorical denial did not dissuade the Washington Times.


8. Recently, as reported again by the Washington Times, other "intelligence sources" accused France and Russia of seeking to sign oil contracts with Iraq just before the start of the war. A "military expert" asked by MSNBC about the coalition's failure to discover banned weapons insinuated that "weapons could well have been discovered" and that they "could very well be French or Russian," which would have led the administration not to mention them "out of concern for easing tensions."