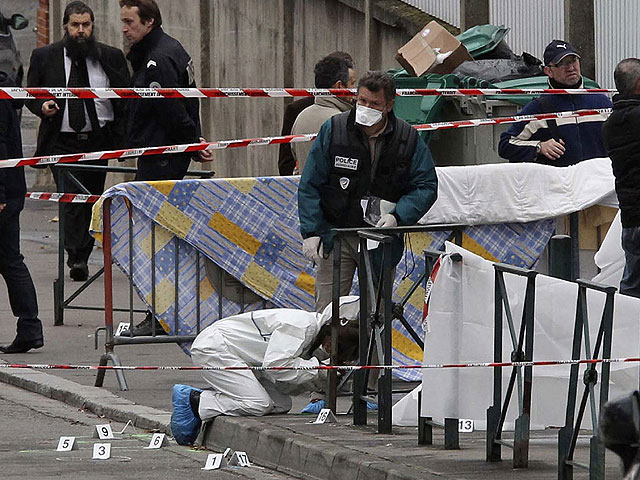 (CBS/AP) TOULOUSE, France - French President Nicolas Sarkozy says authorities are raising the terrorism alert to its highest level across a swath of southern France where a gunman opened fire on a Jewish school before fleeing.

Sarkozy said Monday's attack in Toulouse, which killed three children and a rabbi, was the worst-ever school shooting in France. He said the terror alert level is being raised to scarlet, the highest on a four-point scale, in the region that includes Toulouse and neighboring areas.

A U.S. official told CBS News by email on Monday that they would continue to monitor threats including those against the American Jewish Community, but to their knowledge there were no specific threats to locations within the U.S. at this point. They said are continuing to work with European authorities to monitor the situation there, and asking the general public to be vigilant and report any suspicious activity to local law enforcement authorities.

Increased security at local synagogues has been seen in New York City. NYPD deputy commissioner Paul Browne told CBS News by email that even though there is no increased risk for Jewish Americans, the department decided to provide more officers to communities and venues. "Although there is no known specific threat against New York City, the NYPD has taken the precaution of stepping up coverage of Jewish neighborhoods and institutions in the city, including special attention by the NYPD Patrol Bureau to synagogues, and the NYPD Counterterrorism Bureau's assignment of Critical Response Vehicles to Jewish institutions and neighborhoods," he wrote.

One of the weapons used Monday, a .45 caliber handgun, was the same used to kill three paratroopers in two different attacks in the Toulouse region last week, according to investigators. Those two deadly attacks in the same region last week killed three French paratroopers and left another seriously injured. The attacker also used a .35-caliber gun, the police official said.

The motive is unclear, but all the targets apparently have been ethnic minorities. Sarkozy also suggested one person was behind all three attacks.

Sarkozy said 14 riot police units "will secure the region as long as this criminal" hasn't been caught.

A 30-year-old rabbi and his 3-year-old and 6-year-old sons were killed in Monday's attack, just before classes started at the Ozar Hatorah school, a junior high and high school in a quiet residential neighborhood, Toulouse Prosecutor Michel Valet said. Witnesses said the man worked at the school.

Police identified the fourth victim as the 10-year-old daughter of the school director. A 17-year-old was critically injured. The gunman fired 15 shots during the attack.

"He shot at everything he had in front of him, children and adults," Valet said. "The children were chased inside the school."

Witnesses say shooter was not random but took aim at victims and chased some into schoolyard, reports CBS Radio News correspondent Elaine Cobbe. Investigators are examining footage from a surveillance camera in the school for any clues.

Sarkozy denounced "the savagery" of Monday's attack on a school, and vowed to find the killer or killers.

Interior Ministry spokesman Pierre-Henry Brandet told The Associated Press that the suspect in Monday's school shootings made his getaway on a dark-colored scooter -- just as the assailant or assailants did in the two shootings last week.

Nicole Yardeni, a local Jewish official who saw security video of the attack from the single camera near the school gate, described the shooter as "determined, athletic and well-toned." She said he wore a helmet with the visor down.

"You see a man park his motorcycle, start to shoot, enter the school grounds and chase children to catch one and shoot a bullet into her head," Yardeni said. "It's unbearable to watch and you can't watch anymore after that. He was looking to kill."

The school targeted Monday, behind a high white wall with few external markings, was cordoned off by police, who then escorted other children out as forensics police combed the scene.

One officer held a distraught girl, her face in her hands. A mother and son wearing a yarmulke walked away from the site, their faces visibly pained. A video camera was visible at the school's entrance.

"The drama occurred a bit before 8 a.m. A man arrived in front of the school on a motorcycle or scooter," Valet said, adding that the man got off his scooter outside the school and opened fire.

The prosecutor said the suspect probably used two weapons, including one of a large caliber.

Forensic analysis showed the same weapon was used in the shootings in Montauban and Toulouse.

A man who lives near the school said he spoke with the father just before he was shot and killed.

"I said 'Bonjour' to him like normal," said the 29-year-old, asking to be identified only by his first name Baroukh.

"Then he went out into the school entrance. I heard the shots and I turned around and saw him on the ground. He looked dead. But I didn't have much time to see who did it because I panicked and started running away."

"It's a day of national tragedy," Sarkozy said after arriving. "The barbary, the savagery, the cruelty cannot win. Hate cannot win. The nation is much stronger."

In Jerusalem, Israeli Defense Minister Ehud Barak said "whether it was a terror attack or a hate crime, the loss of life is unacceptable."

Einat Wilf, an Israeli legislator from the Independence Party, said legislators were being briefed on the shooting.

Special prayers were being offered Monday at Notre Dame Cathedral in Paris.