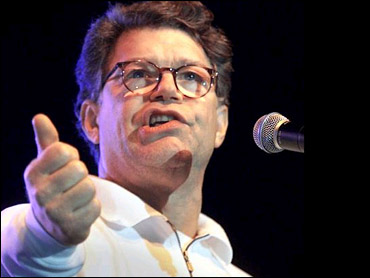 Fox News Channel has sued liberal humorist Al Franken and the Penguin Group to stop them from using the phrase "fair and balanced" in the title of his upcoming book.

Filed Monday in Manhattan, the trademark infringement lawsuit seeks to force a Penguin publisher, Dutton books, to rename the book, "Lies and the Lying Liars Who Tell Them: A Fair and Balanced Look at the Right." It also asks for unspecified damages.

Fox News registered "Fair & Balanced" as a trademark in 1995, the lawsuit said.

Franken's "intent is clear — to exploit Fox News' trademark, confuse the public as to the origins of the book and, accordingly, boost sales of the book," it said.

Dutton spokeswoman Lisa Johnson accused Fox News' parent company, News Corp., of trying to suppress the book, which is due out next month.

"The attempt to keep the public from reading Franken's message is un-American," she said.

Franken accused O'Reilly of lying and the talk show host yelled at the comedian to "Shut up."

Franken's book explores the allegation that the media has a liberal bias, one he disputes. The cover displays a picture of O'Reilly, and Franken said he wanted to explain why the Fox News figure was shown.

Franken said O'Reilly claimed in a C-SPAN interview that the show he once anchored, Inside Edition, had won a Peabody award. It never did, but won a Polk award instead. O'Reilly was quoted on three other occasions making a similar claim, Franken alleged.

When Franken finished, O'Reilly said he had spoken past the 15-minute limit and called him an "idiot."

"This idiot has been going on for 35 minutes," O'Reilly said.

When Franken tried to interrupt him, O'Reilly told him to "Shut up."

O'Reilly called Franken "vicious" and said he was "blinded by ideology."

According to USA Today, O'Reilly said his photo was used without permission and said later that Fox lawyers would "handle this." Franken claimed it is in the public domain.

Franken is the author of "Rush Limbaugh is a Big Fat Idiot" and other titles. O'Reilly has previously inked "The O'Reilly Factor", and "The No Spin Zone."