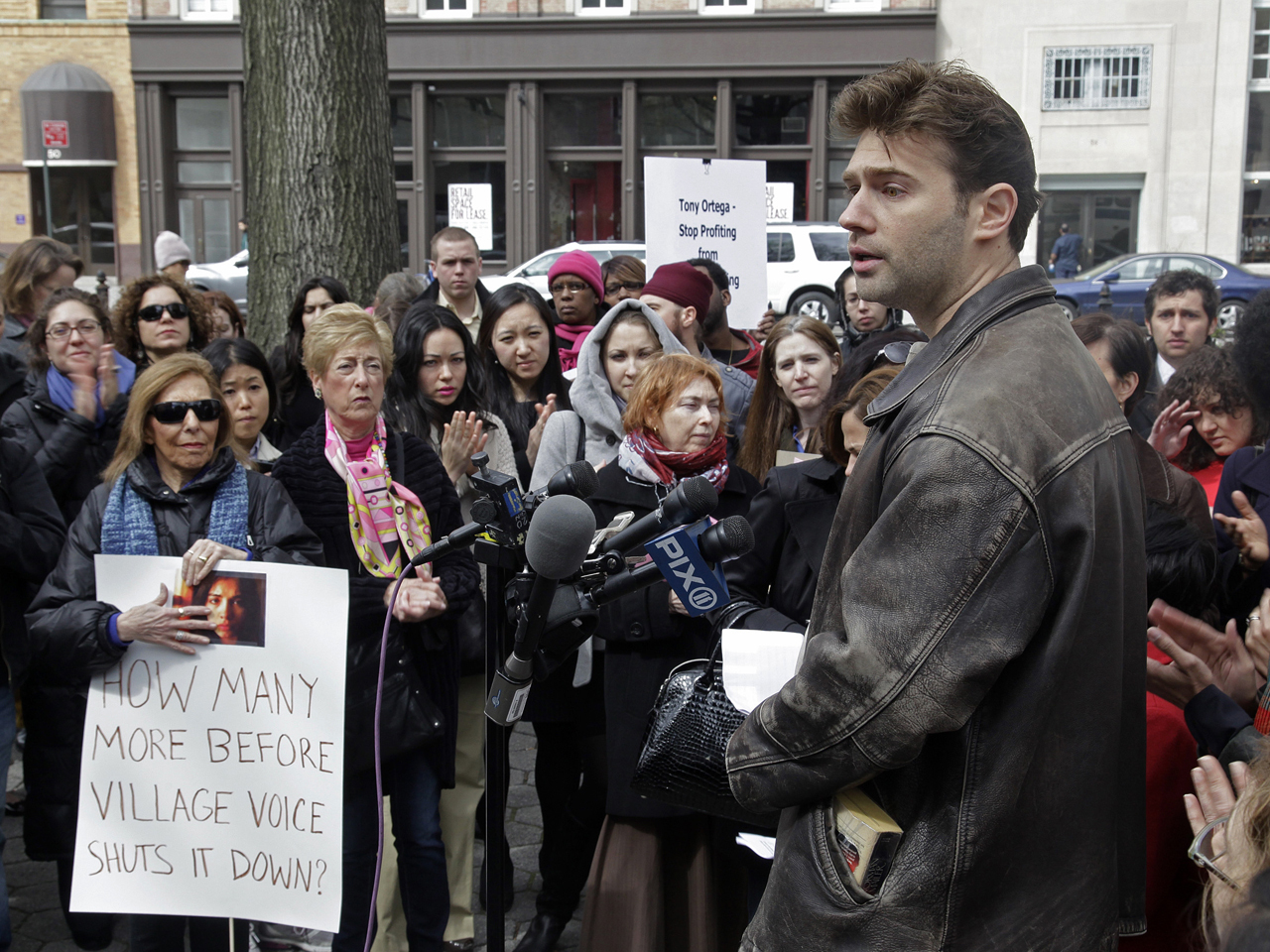 John Buffalo Mailer, 33, an actor and writer, marched with about 100 protesters from a park to the Voice's East Village offices on Cooper Square. They want the weekly's parent company to shut down its Backpage.com adult classified section, which they say includes ads linked to child sex-trafficking.

"This was once a progressive paper, a people's paper, and to see it lose its credibility is heartbreaking," Mailer told The Associated Press. "He would not have approved of this at all."

The Phoenix-based Village Voice Media, which operates the paper, said Backpage.com cooperates with law enforcement, reports potential sexual exploitation of children and uses such tools as an automated filter system and manual reviews to detect and prevent sex trafficking.

"The realities and complexity of human trafficking and sexual exploitation are such that to announce that a single website — Backpage.com or other — is the primary source of the scourge and therefore holds the cure to this horrendous problem is not only unsupported but irresponsible," said Liz McDougall, general counsel for Village Voice Media.

The Rev Galen Guengerich, senior pastor of Manhattan's All Souls Unitarian church, said he believes there's another reason the ads appear in the paper:

He said the adult ads boost the finances of a publication that's been struggling to survive in recent years. He said, "It's ironic that at its beginning, the Voice did exactly what we're doing today" — opposing corruption and social wrongdoing.

"Now, they're defending a revenue stream," he said.

Protesters set up a pile of children's sneakers.

"These are for the girl who should have been walking in these shoes, but isn't," said Guengerich, holding up a pair. "We hear the silent cries of those who have been used and discarded."

The coalition of protesters — religious leaders, activists and politicians — delivered a petition signed by almost a quarter of a million people demanding that Village Voice Media stop running the ads.

Opposition to them started last year. In August, a group of attorneys general from across the country wrote a letter to Backpage.com saying its efforts to curtail the ads had failed.

"While Backpage.com professes to have undertaken efforts to limit advertisements for prostitution on its website, particularly those soliciting sex with children, such efforts have proven ineffective," the prosecutors said.

They said that over three years, they had tracked more than 50 instances, in 22 states, of charges filed against those trafficking or attempting to traffic minors on the site.

In some cases, adults are pictured but minors are substituted at the point of sale in a grossly illegal transaction, the prosecutors said.

Several New York City Council members have introduced a resolution asking Village Voice Media to close down the adult section being used as a "platform to traffic minors for sex."

Such classifieds often use veiled words like "petite" and other codes to signal underage sex, said one protester, Katrina Eugenia, 24, a photographer and painter.