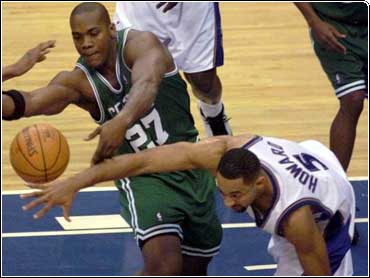 Celtics spokesman Jeff Twiss said he does not know why Williams failed the physical. General manager Chris Wallace did not return a call.

Fortson, who has been stuck behind Antoine Walker in the Celtics' lineup, was traded to Toronto on Wednesday for Williams and Sean Marks.

Raptors general manager Glen Grunwald acknowledged that Williams has had minor knee problems and did have arthroscopic surgery after Toronto acquired him from Portland two years ago.

"But it has never affected his ability to play," he said. "He has not missed a game since then due to any kind of knee injury and has, in fact, been a regular starter for the Raptors over the last two seasons."

Grunwald said he did not knowingly deal Boston damaged goods.

"We tried to do as much as we could before the trade happened," he said. "We sent over all the medical records we had. We had our doctor talk to their doctor and it was my understanding that everything was going to be fine."

Fortson becomes a free agent at the end of the season. The Celtics first acquired him this summer in a trade with Denver for Ron Mercer.

Fortson averaged 11 rebounds a game last season, but he has averaged just 5.9 points and five rebounds in 12.5 minutes a game this year as Walker took most of the minutes at power forward. He also missed 25 games because of stress fracture in his right foot.

"I'm sick of this," Fortson told the Toronto Star. "I'd like to be somewhere where I don't have to worry about packing my bags and leaving. I don't want to be a journeyman. I'm only 23."

Williams is averaging 5.3 points and 19 minutes for the Raptors. Marks is rarely used.

The NBA trade deadline is Feb. 24, and any of the players could be traded again.

"Both Alvin and Sean are good players and individuals of great character," Grunwald said. "It was a difficult decision to trade them in the first place and we are happy to have them back with the club."