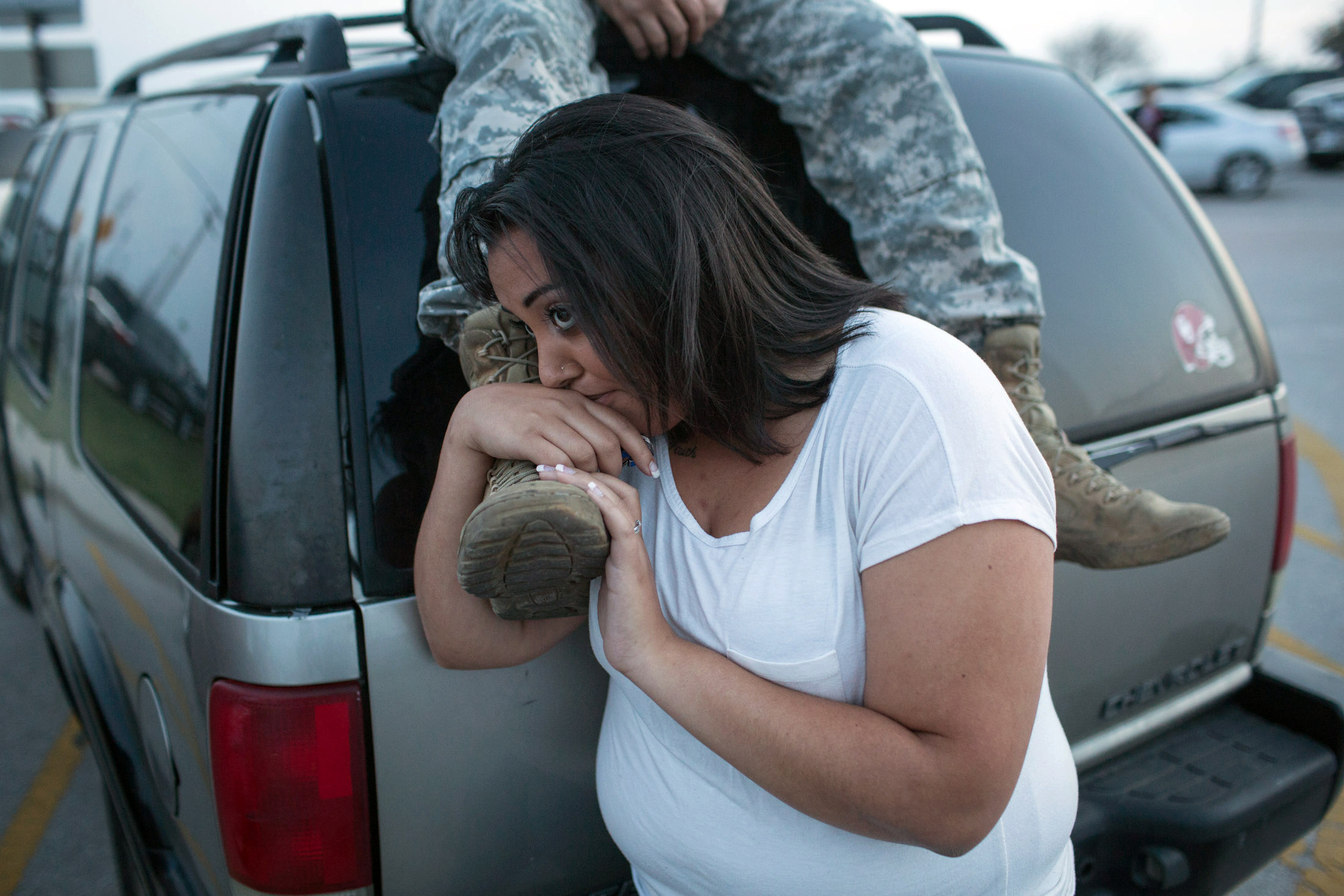 FORT HOOD, Texas - A soldier being treated for mental health issues opened fire Wednesday with a semiautomatic weapon at Fort Hood, killing three people and wounding several others before taking his own life as a military policewoman confronted him, officials said.

The incident occurred Wednesday afternoon at Fort Hood, the site of a notorious 2009 mass shooting carried out by an Army psychiatrist who was an extremist Muslim.

Lt. Gen. Mark A. Milley, commander of the III Corps and of Fort Hood, said the suspect in Wednesday's rampage suffered from mental health issues and been under evaluation to determine whether he had post-traumatic stress disorder.

"At this time, there is no indication that this incident was related to terrorism, although we are not ruling anything out and the investigation continues," Milley told reporters Wednesday night.

He said four people were killed, including the gunman, who died of a self-inflicted wound. A total of 16 other people were injured. All of the victims, both the slain and injured, were military, he said.

At least three of the injured were reported in critical condition.

Milley declined to name the soldier, saying his family had not been notified. But he did say that the soldier, who had served in combat for four months in Iraq in 2011, and was being treated for mental health issues and was on medication.

In Chicago, President Obama said he was following the situation closely.

"Any shooting is trouble. Obviously, this reopens the pain of what happened Fort Hood five years ago," the president said.

"We're heartbroken that something like this might have happened again," Mr. Obama said. "I want to just assure all of us we are going to get to the bottom of exactly what happened."
In a hastily arranged statement, Mr. Obama reflected on the sacrifices that troops stationed at Fort Hood have made - including enduring multiple tours to Iraq and Afghanistan.

"They serve with valor. They serve with distinction, and when they're at their home base, they need to feel safe," Mr. Obama said. "We don't yet know what happened tonight, but obviously that sense of safety has been broken once again."

"It's a terrible tragedy, we know that. We know that there are casualties, both people killed and injured," Secretary of Defense Chuck Hagel told reporters in Honolulu, Hawaii, where he was meeting with Asian defense ministers. The shooting began shortly after 4 p.m. and lasted about 15 or 20 minutes, Milley said. The gunman opened fire first in a building in the 1st Medical Brigade area, Milley said, and then got into a vehicle, firing several shots he drove to a second building in the 49th Transportation Battalion area.

He got out, entered the second building, and opened fire again, Milley said.

The base went into lockdown as the drama started to unfold. Warning sirens began going off and and all personnel were urged to shelter in place.

"There has been a shooting at Fort Hood and injuries are reported. Emergency crews are on the scene. No further details are known at this time," the post said in a brief statement.

Milley said military police responded quickly and the rampage came to a violent end when the suspect, who was armed with a .45-caliber Smith & Wesson semiautomatic piston, was confronted by a military policewoman.

"He was approaching her at about 20 feet. He reached into his jacket. She pulled out her weapon. He put his weapon to his head and shot himself in the head," Milley said.

It was "clearly heroic, what she did at that moment in time," the general said, but added, "She did exactly what we expect of a United States soldier."

Tayra DeHart, 33, said she had last heard from her husband, a soldier at the post, that he was safe, but that was hours earlier.

"The last two hours have been the most nerve-racking I've ever felt. I know God is here protecting me and all the soldiers, but I have my phone in my hand just hoping it will ring and it will be my husband," DeHart said.

Brooke Conover, whose husband was on base at the time of the shooting, said she found out about it while checking Facebook. She said she called her husband, Staff Sgt. Sean Conover, immediately to make sure he was OK.

"I just want him to come home," Conover said.

The all-clear sirens sounded around 9 p.m. and cars began to stream out of the giant complex as people who had been stuck on the base were finally allowed to go home.
Milley said the suspect was married and had a family, but did not elaborate. He said the soldier had been transferred to Fort Hood from another military installation in February.

He said the suspect had apparently suffered a "traumatic brain injury" in the past, but it was not combat-related. The shooter had been being treated for depression, anxiety, "and a number of other psychiatric issues," Milley said. He was on medication.

The general said the suspect had been undergoing a "diagnosis process" to determine whether he had post-traumatic stress disorder, but said no diagnosis had been made.

Late on Wednesday, investigators had already started looking into whether the gunman's combat experience caused lingering psychological trauma.
Among the possibilities they planned to explore was whether a fight or argument on base triggered the shooting.

"We have to find all those witnesses, the witnesses to every one of those shootings, and find out what his actions were, and what was said to the victims," a federal law enforcement official, speaking on condition of anonymity because he was not authorized to discuss the case by name, told The Associated Press.

The official said authorities would begin by speaking with Lopez's wife and also expected to search his home and any computers he owned.

Of the 16 injured, some of the victims suffered bullet wounds and others were cut by flying glass, Milley said. He said one person was injured while jumping over a fence to escape the shooting scene.

Milley praised the emergency crews from surrounding communities who rushed to the base, home of the Army's 1st Cavalry Division.

The injured were taken to the base hospital and other local hospitals.
Officials at Scott and White Hospital, in Temple, said during a news conference Wednesday night that eight patients were being treated at the hospital and one more was en route, reports CBS Waco, Texas affiliate KWTX.

Three of the eight at the hospital were in critical condition and the others were seriously hurt, officials said.

The victims, who were transported by either helicopter or ambulance, suffered gunshot wounds, some in the extremities, others in the abdomen, chest, and neck.

Some were shot repeatedly, officials said.

Ford Hood, near Killeen, in central Texas, was the site of a mass murder on Nov. 5, 2009, when Maj. Nidal Malik Hasan, an Army psychiatrist, opened fire at a soldier readiness center on the base. He shot 13 people dead and wounded more than 30 others. It was the worst shooting ever to take place on an American military base.

Hasan, who was left paralyzed when he was shot by police responding to the shooting spree, has been sentenced to death for the rampage.

In September, a former Navy man opened fire at the Washington Navy Yard, leaving 13 people dead, including the gunman.

After that shooting, Defense Secretary Hagel ordered the Pentagon to review security at all U.S. defense installations worldwide and examine the granting of security clearances that allow access to them.

Asked Wednesday about security improvements in the wake of other shootings at U.S. military bases, Hagel said, "Obviously when we have these kinds of tragedies on our bases, something's not working."

Addressing reporters Wednesday night, Milley said the Fort Hood community had endured tough times before and would get through this too.

"Events in the past have taught us many things here at Fort Hood," he said. "And we know that the community is very resilient."

Asked whether he wondered why the base had been the scene of two mass shootings, Milley told reporters, "I wasn't thinking about 'not again' or anything like that. Right now my concern is with the families, those that were injured and those that were killed."

He did say, however, that "the response from the law enforcement and the medical units displayed lessons learned from the previous case."

Gen. Martin Dempsey, chairman of the Joint Chiefs of Staff, offered sympathies to the Fort Hood community on Wednesday night.

"Our thoughts and prayers are with the Fort Hood community in the aftermath of this tragedy. Many questions remain and our focus is on supporting the victims and their families," Dempsey said. "This is a community that has faced and overcome crises with resilience and strength."

Sen. John Cornyn, R-Texas, asked Americans to pray for the victims and their families.

"Tonight, Texans' hearts are once again very heavy. The scenes coming from Fort. Hood today are sadly too familiar and still too fresh in our memories," he said. "No community should have to go through this horrific violence once, let alone twice."

Reports of gunfire near White House
Thanks for reading CBS NEWS.
Create your free account or log in
for more features.
View CBS News In
CBS News App Open
Chrome Safari Continue
Be the first to know
Get browser notifications for breaking news, live events, and exclusive reporting.