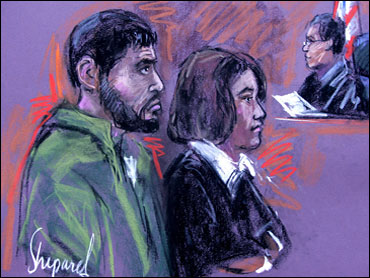 One drove a cab, three were roofers. Another worked at a 7-Eleven and a sixth at a supermarket. Their alleged plot to attack Fort Dix was foiled by another blue-collar worker: a video store clerk.

Six foreign-born Muslims were accused Tuesday of planning to assault the Army base and slaughter scores of U.S. soldiers with automatic weapons and rocket-propelled grenades.

The unidentified clerk is being credited with tipping off authorities in January 2006 after one of the suspects asked him to transfer a video to DVD that showed 10 men shooting weapons at a firing range and calling for jihad, prosecutors said.

"If we didn't get that tip," said U.S. Attorney Christopher Christie, "I couldn't be sure what would happen." FBI agent J.P. Weis called the clerk the "unsung hero" of the case.

Authorities said there was no direct evidence connecting the men to any international terror organizations such as al Qaeda. But several of them said they were ready to kill and die "in the name of Allah," prosecutors said in court papers.

Weis said the U.S. is seeing a "brand-new form of terrorism," involving smaller, more loosely defined groups that may not be connected to al Qaeda but are inspired by its ideology.

"These homegrown terrorists can prove to be as dangerous as any known group, if not more so. They operate under the radar," Weis said.

In the wake of 9/11, more than 400,000 names have come under one form of government surveillance or another, from watch lists to wiretaps, reports CBS News chief investigative correspondent Armen Keteyian.

Four of the arrested men were born in the former Yugoslavia, one was born in Jordan and one came from Turkey, authorities said. Three were in the United States illegally; two had green cards allowing them to stay in this country permanently; and the sixth is a U.S. citizen.

Five were charged with conspiracy to kill U.S. military personnel; the sixth, Abdullahu, was charged with aiding and abetting illegal immigrants in obtaining weapons.

One of the suspects, Tatar, worked at his father's pizzeria and made deliveries to the base, using the opportunity to scout out Fort Dix for an attack, authorities said.

"Clearly, one of the guys had an intimate knowledge of the base from having been there delivering pizzas," Christie said.

The group often watched terror training videos, clips featuring Osama bin Laden, a tape containing the last will and testament of some of the Sept. 11 hijackers, and tapes of armed attacks on U.S. military personnel, authorities said.

The men trained by playing paintball in the woods in New Jersey and taking target practice at a firing range in Pennsylvania's Pocono Mountains, where they had rented a house, authorities said.

"We believe they are their own cell," said Christie. "They are inspired by international terror organizations. I believe they saw themselves as part of that."

Fort Dix last was in the international spotlight in 1999, when it sheltered more than 4,000 ethnic Albanian refugees during the NATO bombing campaign against Yugoslavia.

In addition to plotting the attack on Fort Dix, the defendants spoke of assaulting a Navy installation in Philadelphia during the annual Army-Navy football game and conducted surveillance at other military installations in the region, prosecutors said.

Basic security at the nation's military installations has been at the next-to-lowest level for more than four years, though commanders at some bases say they have introduced extra measures to deter potential intruders or provide early warnings.

Military bases have been on a heightened state of alert since the Sept. 11 terrorist attacks but nonetheless are acknowledged to be vulnerable, given their proximity in some cases to urban areas and civilian roadways. Ship bases have the added problem of securing waterfronts and surrounding waterways.

After the video clerk's tip, investigators said they infiltrated the group with two informants and bided their time while they secretly recorded the defendants.

The six were arrested Monday night trying to buy AK-47 assault weapons, M-16s and other weapons from an FBI informant, authorities said. It was not clear when the alleged attack was to take place.

"We had a group that was forming a platoon to take on an army. They identified their target, they did their reconnaissance. They had maps. And they were in the process of buying weapons. Luckily, we were able to stop that," said Weis.

The arrests renewed worries among New Jersey's Muslim community. Hundreds of Muslim men from New Jersey were rounded up and detained in the months after the 2001 terror attacks, but none were connected to that plot.

"If these people did something, then they deserve to be punished to the fullest extent of the law," said Sohail Mohammed, a lawyer who represented scores of detainees after the Sept. 11 attacks. "But when the government says `Islamic militants,' it sends a message to the public that Islam and militancy are synonymous."

Mario Tummillo, who lives near Tatar's father in Cookstown, said he worked with Tatar at a pizza parlor. Tummillo, 20, described Tatar as a religious man who "wasn't violent at all."

He recalled Tatar praying in the back of the restaurant and said Tatar often talked about religion, bringing it up in conversations about other subjects.

"He would start talking about how you should worship God," Tummillo said.