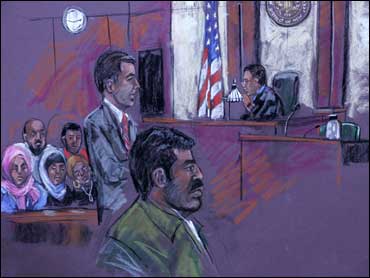 Six foreign-born Muslims were arrested and accused Tuesday of plotting to attack the Army's Fort Dix and massacre scores of U.S. soldiers, a plot the FBI says was foiled when the men took a video of themselves firing assault weapons to a store to have the footage put onto a DVD.

The plot to attack U.S. soldiers ended in darkness at a home in Cherry Hill, N.J., reports CBS News correspondent Bob Orr. Ringleaders of a homegrown terror cell with big plans and big mouths were arrested as they tried to buy AK-47 and M-16 assault weapons from an FBI agent posing as an arms dealer.

Federal agents watched and listened to the six suspects for more than a year, adds Orr.

The defendants, all men in their 20s from the former Yugoslavia and the Middle East, include a pizza deliveryman suspected of using his job to scout out the military base.

"Today we dodged a bullet. In fact, when you look at the type of weapons that this group was trying to purchase, we may have dodged a lot of bullets," said FBI agent J.P. Weiss. "We had a group that was forming a platoon to take on an army. They identified their target, they did their reconnaissance. They had maps. And they were in the process of buying weapons. Luckily, we were able to stop that."

Three of the men are illegal aliens; the others are legal permanent residents, and one is a U.S. citizen, CBS News reports. Four of the men were born in the former Yugoslavia, one was born in Jordan and one came from Turkey, authorities said. All had lived in the United States for years.

At the time of the arrests, the plot was in the planning stages and no attack was imminent, CBS News has learned. Officials said this is more of a "homegrown" plot with no ties to al Qaeda or any other international terrorist organization.

Their goal was "to kill as many American soldiers as possible" in attacks with mortars, rocket-propelled grenades and guns, prosecutors said.

Investigators said they infiltrated the group with an informant well over a year ago and bided their time while they secretly recorded the defendants, five of whom lived in Cherry Hill, a Philadelphia suburb about 20 miles from Fort Dix.

"This is what law enforcement is supposed to do in the post-9/11 era — stay one step ahead of those who are attempting to cause harm to innocent American citizens," U.S. Attorney Christopher Christie said.

In the wake of 9/11, more than 400,000 names have come under one form of government surveillance or another, from watch lists to wiretaps, reports CBS News chief investigative correspondent Armen Keteyian.

But only a handful of terrorists have been convicted in cases with concrete ties to al Qaeda, most notably "shoe bomber" Richard Reid and Iyman Faris, sent to bring down the Brooklyn Bridge.

Weiss saluted the unidentified New Jersey store clerk who noticed the suspicious video as the "unsung hero" of the case. "That's why we're here today — because of the courage and heroism of that individual," the FBI agent said.

In addition to plotting the attack on Fort Dix, the defendants spoke of attacking a Navy installation in Philadelphia during the annual Army-Navy football game, and conducted surveillance at other military installations in the region, prosecutors said.

One defendant, Eljvir Duka, was recorded as saying: "In the end, when it comes to defending your religion, when someone is trying attacks your religion, your way of life, then you go jihad."

The six appeared in federal court Tuesday in Camden and were ordered held without bail for a hearing Friday. Five were charged with conspiracy to kill U.S. military personnel; the sixth was charged with aiding and abetting illegal immigrants in obtaining weapons.

One defendant, Mohamad Ibrahim Shnewer, spoke of using rocket-propelled grenades and other weapons to kill at least 100 soldiers, according to court documents.

"My intent is to hit a heavy concentration of soldiers," he was quoted as saying. "You hit four, five or six Humvees and light the whole place (up) and retreat completely without any losses."

"It doesn't matter to me whether I get locked up, arrested or get taken away," another defendant, Serdar Tatar, was alleged to have said. "Or I die, it doesn't matter. I'm doing it in the name of Allah."

The men trained by playing paintball in the woods in New Jersey and taking target practice at a firing range in Pennsylvania's Pocono Mountains, where they had rented a house, authorities said.

They often watched terror training videos, clips featuring Osama bin Laden, a tape containing the last will and testament of some of the Sept. 11 hijackers, and tapes of armed attacks on U.S. military personnel, erupting in laughter when one plotter noted that a Marine's arm was blown off in an ambush, authorities said.

Asked if those arrested had any links to al Qaeda, White House spokesman Tony Snow said it appears "there is no direct evidence of a foreign terrorist tie."

In court documents, prosecutors said the suspects came to the attention of authorities in January 2006 when a Mount Laurel, N.J., shopkeeper alerted the FBI about a "disturbing" video he had been asked to copy onto a DVD.

The video showed 10 young men in their early 20s "shooting assault weapons at a firing range ... while calling for jihad and shouting in Arabic 'Allah Akbar' (God is great)," the complaint said. The 10 included the six men who were arrested, authorities said.

By March 2006, the group had been infiltrated by an informant who developed a relationship with Shnewer, and the informant secretly recorded meetings last August, according to court documents.

One of the suspects, Tatar, worked at his father's pizzeria and made deliveries to the base, using that opportunity to scout out Fort Dix for an attack, authorities said.

"Clearly, one of the guys had an intimate knowledge of the base from having been there delivering pizzas," Christie said.

The men also allegedly conducted surveillance at other area military installations, including Fort Monmouth in New Jersey, Dover Air Force Base in Delaware, and a Philadelphia Coast Guard station.

Besides Shnewer, Tatar and Duka, the other three men were identified in court papers as Dritan Duka, Shain Duka and Agron Abdullahu.

Fort Dix is used to train soldiers, particularly reservists. It also housed refugees from Kosovo in 1999.

The description of the suspects as "Islamic militants" caused renewed worry among New Jersey's Muslim community. Hundreds of Muslim men from New Jersey were rounded up and detained in the months after the Sept. 11 attacks, but none were connected to that plot.

"If these people did something, then they deserve to be punished to the fullest extent of the law," said Sohail Mohammed, a lawyer who represented scores of detainees after the 2001 attacks. "But when the government says 'Islamic militants,' it sends a message to the public that Islam and militancy are synonymous."