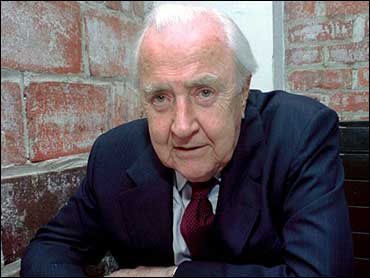 Former Minnesota Sen. Eugene J. McCarthy, whose insurgent campaign toppled a sitting president in 1968 and forced the Democratic Party to take seriously his message against the Vietnam War, died Saturday. He was 89.

McCarthy died in his sleep at assisted living home in the Georgetown neighborhood where he had lived for the past few years, said his son, Michael.

Eugene McCarthy challenged President Lyndon B. Johnson for the 1968 Democratic nomination during growing debate over the Vietnam War. The challenge led to Johnson's withdrawal from the race.

"What McCarthy's campaign did was give them a legitimate outlet to express their opposition to the war so he brought new people into the arena," former McCarthy campaign volunteer Jo Freeman told Chen.

The former college professor, who ran for president five times in all, was in some ways an atypical politician, a man with a witty, erudite speaking style who wrote poetry in his spare time and was the author of several books.

"He was thoughtful and he was principled and he was compassionate and he had a good sense of humor," his son said.

When Eugene McCarthy ran for president in 1992, he explained his decision to leave the seclusion of his home in rural Woodville, Va., for the campaign trail by quoting Plutarch, the ancient Greek historian: "They are wrong who think that politics is like an ocean voyage or military campaign, something to be done with some particular end in view."

McCarthy got less than 1 percent of the vote in 1992 in New Hampshire, the state where he helped change history 24 years earlier.

Helped by his legion of idealistic young volunteers known as "clean-for-Gene kids," McCarthy got 42 percent of the vote in the state's 1968 Democratic primary. That showing embarrassed Johnson into withdrawing from the race and throwing his support to his vice president, Hubert H. Humphrey.

Sen. Robert Kennedy of New York also decided to seek the nomination, but was assassinated in June 1968. McCarthy and his followers went to the party convention in Chicago, where fellow Minnesotan Humphrey won the nomination amid bitter strife both on the convention floor and in the streets.

Humphrey went on to narrowly lose the general election to Richard Nixon. The racial, social and political tensions within the Democratic Party in 1968 have continued to affect presidential politics ever since.

"It was a tragic year for the Democratic Party and for responsible politics, in a way," McCarthy said in a 1988 interview.

"There were already forces at work that might have torn the party apart anyway — the growing women's movement, the growing demands for greater racial equality, an inability to incorporate all the demands of a new generation.

"But in 1968, the party became a kind of unrelated bloc of factions ... each refusing accommodation with another, each wanting control at the expense of all the others."

Although he supported the Korean War, McCarthy said he opposed the Vietnam War because "as it went on, you could tell the people running it didn't know what was going on."

"It was no longer a movement of concerned citizens, but became a national political movement," McGovern said Saturday. "He was an inspiration to me in all of my life in politics." McGovern won the 1972 Democratic presidential nomination, when McCarthy ran a second time.

Former Sen. John Edwards, D-N.C., who ran for vice president in 2004, said McCarthy "was a remarkable American, a man who spoke his conscience, and he was a great leader for my party."

In recent years, McCarthy was critical of campaign finance reform, winning him an unlikely award from the Conservative Political Action Conference in 2000.

In an interview when he got the award, McCarthy said money helped him in the 1968 race. "We had a few big contributors," he said. "And that's true of any liberal movement. In the American Revolution, they didn't get matching funds from George III."

After the attacks of Sept. 11, 2001, McCarthy said the United States was partly to blame for ignoring the plight of Palestinians.

"You let a thing like that fester for 45 years, you have to expect something like this to happen," he said in an interview at the time. "No one at the White House has shown any concern for the Palestinians."

In a 2004 biography, "Eugene McCarthy: The Rise and Fall of Postwar American Liberalism," British historian Dominic Sandbrook painted an unflattering portrait of McCarthy, calling him lazy and jealous, among other things. McCarthy, Sandbrook wrote, "willfully courted the reputation of frivolous maverick."

In McCarthy's 1998 book, "No-Fault Politics," editor Keith C. Burris described McCarthy in the introduction as "a Catholic committed to social justice but a skeptic about reform, about do-gooders, about the power of the state and the competence of government, and about the liberal reliance upon material cures for social problems."

McCarthy was born March 29, 1916, in Watkins, a central Minnesota town of about 750. He earned degrees from St. John's University in Collegeville, Minn., and the University of Minnesota.

He was a teacher, a civilian War Department employee and college economics and sociology instructor before turning to politics. He once spent a year in a monastery.

With a sardonic sense of humor, McCarthy needled whatever establishment was in power. In 1980 he endorsed Republican Ronald Reagan with the argument that anyone was better than incumbent Jimmy Carter, a Democrat.

On his 85th birthday in 2001, McCarthy told the Star Tribune of Minneapolis that President Bush was an amateur and said he could not even bear to watch his inauguration.

In an interview a month before the 2003 invasion of Iraq, McCarthy compared the Bush administration with the characters in the William Golding novel "Lord of the Flies," in which a group of boys stranded on an island turn to savagery.

"The bullies are running it," McCarthy said. "Bush is bullying everything."

McCarthy was an advocate for a third-party movement, arguing there was no real difference between Republicans and Democrats.

In 2000, he wrote a political satire called "An American Bestiary," illustrated by Chris Millis, in which high-level advisers are portrayed as park pigeons — "they strut and waddle" — and reporters are compared with black birds who flock together.

He blamed the media for deciding who is and is not a serious candidate and suggested he should have kept his 1992 candidacy a secret, since announcing it publicly did no good.

For McCarthy, the 1950s and 1960s were the Democratic Party's high points because it pushed the Civil Rights Act through Congress and championed national health insurance programs such as Medicare and Medicaid.

"I think he probably would consider his work in civil rights legislation in the 1960s to be his greatest contribution," his son said Saturday.

The bad times, Eugene McCarthy said, began with America's increased involvement in the Vietnam War and the simultaneous failure of some of Johnson's Great Society social programs.

Instead of giving people a chance to earn a living, McCarthy said, the Great Society "became affirmative action and more welfare. It was an admission the New Deal had failed or fallen."

In recent years McCarthy had lived at Georgetown Retirement Residence, an assisted living center in Washington. He and his wife, Abigail, separated after the 1968 election. She died in 2001.

A private burial is planned for next week and a memorial service in Washington will be scheduled, Michael McCarthy said.