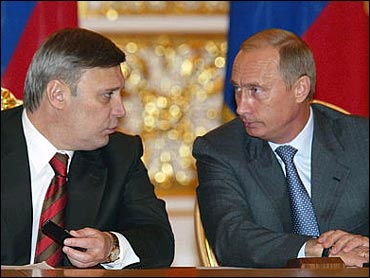 Prosecutors said Monday they have opened a criminal investigation into former Prime Minister Mikhail Kasyanov, a potential presidential candidate and harsh critic of President Vladimir Putin, for abuse of office and fraud.

The press service of the general prosecutor's office said the investigation concerned the legality of a real estate transaction by Kasyanov.

Kasyanov has emerged as a tough critic of the president since Putin fired him as prime minister in 2004. He has not ruled out running in 2008 presidential elections.

Through his spokeswoman, Tatyana Razbash, Kasyanov denied any wrongdoing, saying he had never taken part in any improper commercial deals.

"Through all my years in government service, I never founded any commercial organizations and never held any stocks, bonds, interest or equity for some kind of firms," Kasyanov said in a statement.

"As concerns commercial activities after I left government service, (they have) been conducted in strict accordance with the current law," he said.

The Interfax news agency, citing an unidentified source, reported prosecutors had opened an inquiry after a pro-Kremlin parliamentary deputy and investigative journalist alleged Kasyanov had acquired lucrative state-owned real estate through front firms on his last day in office.

The prosecutor-general's office said it opened its investigation after receiving a letter from the pro-Kremlin lawmaker, Alexander Khinstein, on July 1. It gave no other details but said investigators had confiscated all documents relating to Kasyanov's real estate deal.

A federal environmental official said inspectors were also looking into whether environmental regulations had been violated in the region west of Moscow where Kasyanov's property is located. Oleg Mitvol, of the Federal Nature Monitoring Service, suggested that real estate in the region may have been purchased for prices substantially under market values, Interfax reported.

Kasyanov was the last representative of former President Boris Yeltsin's inner circle to have been in Putin's Cabinet, and he had defended the country's much-maligned tycoons — including Yukos oil company founder Mikhail Khodorkovsky, who is serving a nine-year prison sentence on tax evasion and other charges.

Kasyanov had said that the Yukos investigation, which was widely seen as a Kremlin-directed effort to curb Khodorkovsky's political ambitions, hurt Russia's investment climate and set back economic development.

"As before, I believe that the political course being conducted in the country is mistaken and will harm its future," Kasyanov said in his statement.

Kasyanov served in the Soviet-era state planning agency Gosplan during the 1980s and steadily rose through economic and financial posts after the Soviet collapse. As deputy finance minister in 1996, he worked out a deal for repaying debts Russia inherited from the Soviet Union. Two years later, he played a key role in efforts to restore Russia's credibility after the government defaulted on foreign debt and the ruble plunged.

But he was dogged by media allegations of corruption early in his career, earning the nickname "Misha 2 Percent." He shook off that negative image by championing liberal reforms and presiding over an economic boom.

Kasyanov runs a consulting business that advises Russian organizations and regions on improving the investment climate and helps Western and Russian investors manage the risks of putting money into Russia.