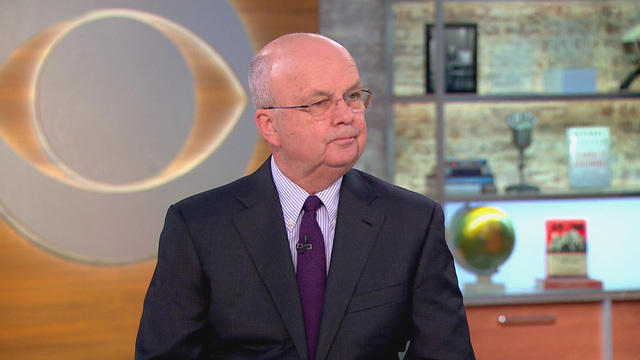 Former CIA director Michael Hayden believes the intelligence community is facing greater challenges than before, including from within our own government. His new book, "The Assault on Intelligence: American National Security in an Age of Lies," argues that a number of forces – including the Trump White House – make the work of intelligence officers harder but more important than ever.

Appearing on "CBS This Morning" Monday, the retired Air Force general who ran the National Security Agency from 1999 to 2005, and led the CIA under President George W. Bush and through the start of the Obama administration, was asked whether he believed South Korea's claim that the regime of North Korean dictator Kim Jong Un was now prepared to give up its nuclear program under certain conditions.

"Look, I want to be hopeful, [but] the profession demands me to be realistic," Hayden said. "We have been pretty much at this exact spot three other times under three other administrations.

"The isolation on the regime, the economic pressure, all good. The rhetoric last summer may have made this a little more dangerous than we had to be, but we're moving in a direction that might give an opportunity.

"One thing I point out in the book is, what's the intelligence backdrop to the American negotiating position? If you just look at people currently in office and carefully read what they say, they make the point that it would almost be irrational for Kim to give up his weapons in anything like the current strategic circumstances. So when we say 'denuclearization,' I hope this intelligence estimate is included in what our expectations are and what our negotiating approach will be."

"In addition to that, we heard the president's National Security Advisor yesterday on 'Face the Nation' talk about verification of that denuclearization, which is a further step," said co-host Norah O'Donnell.

He characterized his expectations as "muted."

Hayden was also asked about President Trump's relationship with the intelligence community.

"It's had a bit of a rocky road," he said. "A good friend of mine, John McLaughlin, says the relationship has gone through four stages. First of all, he [Trump] was ignorant – I mean, he really didn't know anything about the community. That's not uncommon, but I think it was an extra dose this time simply because he and members of his team had no experience in government.

"It quickly went to confrontation, because the first time we had to meet him and discuss was over an issue that other people were using to challenge his legitimacy as president – the whole Russia thing.

"We've now gotten into a zone which John calls inevitability. You can't live without it. We're existing comfortably/uncomfortably."

Co-host John Dickerson pointed out that the intelligence community has been criticized in the past for releasing information – such as an assessment of weapons of mass destruction in Saddam Hussein's Iraq, or torture – that was not true.

"Look, John, I get it," Hayden said. "Hard work. But that's an argument about the truth; that's an argument about what constitutes objective reality. I'm saying over here, we have a trendline that seems to want to make decisions not on objective reality. Case in point: the Muslim ban. Remember, about a week out of the gate for the new administration, because why? Because we had an apocalyptic threat from Syrian refugees and an absolutely dystopian vetting system? No reality whatsoever.

"By the way, you don't see the intel community – even the ones currently in government – arguing for that. It was made based upon something else. Not an argument over objective reality."

"What about the fact that the president made the choice to retaliate against Syria based on an  intelligence assessment of their use of chemical weapons?" Dickerson asked.

"He absolutely did. I see evidence that when it comes to implementing – back to the necessity and inevitability – the president goes to the intelligence with how to go do this. What I didn't see – it may have happened, I hope it did – but what I didn't see was a question to the intelligence community for the broader context, like, why did [Syrian President Assad] do that? Is he scared? Or is he overconfident? What were the Iranians thinking? What were the Russians thinking?

"Michael Gerson has a great phrase for the president, and this is the real challenge for intelligence: Michael says the president lives in the 'eternal now.' There's the veil of history, and few consequences [in the future]. The purpose of intelligence is context. It's all about history. It's all about consequences, and hence the challenge we have."

Hayden then returned to the issue of Mr. Trump's relationship with the intelligence community.

"By the way, I talked about the phases. We went from ignorance to opposition to acceptance, inevitability. Phase 4 is when the Mueller report [on Russian interference and collusion with the Trump campaign] finally comes out."

Wagner asked, "Do you think he'll accept it?"

"That's why phase four is different from three. We don't know what it is, and we don't know what the response will be. But right now the president has been chipping away, delegitimizing important institutions like the Department of Justice and the FBI.  Can that spread again – because he's done it before – to the intelligence community?

"The point I try to make in the book to people still in government is, in addition to your own conscience and being who you are, you are responsible for these institutions, for their survival. You cannot accommodate so much to the peculiarities and quirks of any one president that you delegitimize the institutions for history, for the people, and for future presidents."

Dickerson also asked Hayden about President Trump's recent claims that his administration has done a "great job" of ridding the Mideast region of ISIS, yet there was a double suicide bombing in Kabul, Afghanistan early Monday in which more that two dozen people were killed. "Where do things stand?"

"The president has amped up the pressure on ISIS, both in Afghanistan and in Syria," Hayden said. "A few more forces, maybe a little more local commander authority to get some things done on the battlefield. Folks like me celebrate that. I call it kind of 'Obama plus' – a little more energy, a little more freedom of action.

"But this is a long-term battle. This is not one where you start spiking the football. And so you see in Syria, we're not yet done, and the local commanders are trying to say it's not time to turn the lights out."

And, he adds, "Afghanistan is probably a condition to be managed, not a problem to be solved. We're going to have to keep the level of violence there down to an acceptable level, I think, for a very long time."