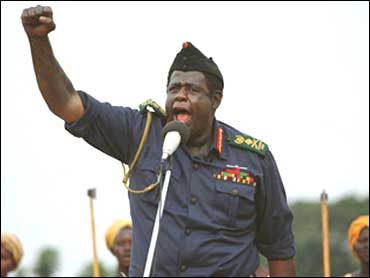 In "Good Morning Vietnam," Forest Whitaker was a giggling, wide-eyed private. He was a pool hustler in "The Color of Money," and he played a British soldier captured by the IRA in "The Crying Game."

From the world of hit men in "Ghost Dog" to the world of high fashion "Pret a Porter," Whitaker doesn't so much play roles as inhabit them, transforming himself most recently into the African dictator Idi Amin in "The Last King of Scotland."

It's a role that has earned him a Golden Globe, a SAG award, and his first Oscar nomination.

Although he has played almost everything, the role of the hottest, most sought-after star in Hollywood is completely new for Whitaker.

"It's very unusual, I'm still getting used to it, you know what I mean? I feel a lotta of love!" he told Sunday Morning correspondent Byron Pitts.

Whitaker carries it all with a quiet grace that can be rare in Hollywood. When we met last week at New York's Jazz at Lincoln Center, what was most striking about the 6-foot-2 Whitaker wasn't the hype around him but the humanity within.

"I don't know if I'm always grounded, but I try to keep my center," he said. "I work on it. I work on trying to be decent, trying to become a better person. I don't know."

While the Oscar buzz will almost certainly increase his income, Whitaker says improving his craft, as an actor and director, is the treasure he most seeks — it's just another step in his life's journey.

"I feel like I just really kind of moved into a space where my work is going to be — maybe what it should be. I think my best work is about to happen," he said.

Whitaker was born in East Texas, a son of the South with middle-class parents: His mother was a teacher, his father an insurance salesman. He grew up in Los Angeles where football was his early passion. That led to a college scholarship, but a back injury returned him to an earlier love: classical music, which led to a movie career.

"An agent saw me singing in opera, so I started working professionally while I was in conservatory," he said.

His first significant role was in "Fast Times at Ridgemont High" as the tough high school football star. It was a role he didn't need to do much research for, but that would change. In fact, Whitaker has become something of a legend for the way he immerses himself in characters.

To play Amos, who hustles Paul Newman's Fast Eddie in "The Color of Money," he learned to play pool. He learned to play the sax to portray Charlie Parker in Clint Eastwood's "Bird." While preparing for "Diary of a Hit Man," he actually met a hit man.

"I had done a movie called 'Criminal Justice,' and I played a prisoner," Whitaker said. "So I asked, [and] I went to prison."

"He came in and he helped me," he said. "Because I took his voice, he, like, dressed me. He brought me shopping to buy the right clothes. He was more of a designer hit man!"

The movie's costume department got the look right, Whitaker said, but not the labels or the price tags. His hit man friend would have bought much more expensive clothes and never would have worn the trench coat Whitaker wore.

To prepare for his role as Idi Amin, Whitaker gained more than 50 pounds, learned to play the accordion, and co-wrote the song Amin plays. He also learned to speak Amin's language, Kiswahili, well enough to fool some Africans, studied documentary and news footage, and most importantly, spent 3 1/2 months in Uganda talking to Amin's relatives, girlfriends, cabinet ministers, and generals as well as the families of people murdered during his reign of terror — all so he could humanize a man most people consider evil.

Yet for all his research and all the rave reviews that followed, Whitaker's role in "The Last King of Scotland" almost never happened.

As NYU's Richard Brown shared with his Movies 101 class, director Kevin MacDonald thought Forest Whitaker might be just too nice a guy to play the part of Idi Amin.

"I loved his work and I adored him, but he's a very soft-spoken, modest man," MacDonald said.

But in a scene where Amin explodes at a doctor, Whitaker proved him wrong.

"It was the most terrifying moment of my life," MacDonald said.

In real life, Whitaker is a quiet family man, happily married to former model and actress Keisha Whitaker, whom he met on the set of the movie "Blown Away." They have four children: Ocean, Autumn, Sonnet, and True. He's a vegetarian and has a black belt in karate. He also studies yoga.

In Ebony magazine, his wife called him "a gentle soul and a nice spirit." But Whitaker said she runs the show in his house.

He also takes his job home and sometimes prepares for a role by acting it out in front of his children. In fact, of all the critical acclaim that's come Whitaker's way recently, it was his son's reaction to "The Last King of Scotland" that moved him the most.

"He just grabbed me and put his hands around me and said, 'Yeah, Dad,'" he said. "I didn't know how he was going to respond, you know, but he was so proud of me."

Whitaker has never been to the Oscars before, and he isn't sure what to expect. He said it was something he never imagined, even though the Oscars are held only about nine blocks from his home — but that doesn't mean he and his wife will be walking.

"There's no way I can get my wife to walk like nine blocks," he said. "You gotta feel a little special, you know?"

When it comes to his craft, Whitaker is more than a little special. He's beloved by colleagues for his work ethic and his modesty. He didn't stumble into stardom; he approached it like a brick mason. He's still building. He's still modest — not quite ready to admit that he is a bona fide movie star.

"I feel like an artist, I guess. How do you define 'movie star'?" he said. "Definitely, people are going to know me on the street, and I have people here, so I guess I have a posse, you know? So, yeah, I guess so."