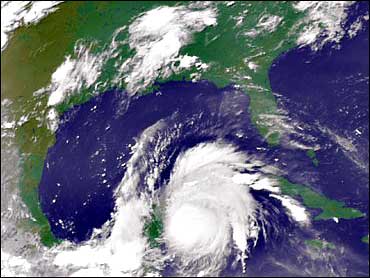 The government on Tuesday sharply boosted its forecast for hurricanes this season, predicting 18 to 21 tropical storms by the end of November.

That's up from a forecast in May of 12 to 15 tropical storms, seven to nine of them becoming hurricanes.

There have already been seven named storms this year, two of them hurricanes. That means the remainder of the year could see 11 to 14 more storms, including seven to nine more hurricanes, Weather Service Director David L. Johnson said at a briefing.

Hurricanes derive their energy from warm water. The sea surface is two to three degrees warmer than normal for this time of year, Bell noted.

Wind shear, a change in wind direction with altitude, can suppress these storms and lack of shear allows them to form. The jet stream is in place to guide disturbances moving off the coast of Africa, he added.

Bell said hurricanes have increased since 1995. He said there is a cycle between more and less active hurricane seasons which lasts for decades. The nation's coastlines had major population increases during the decades with low storm activity before 1995, he noted.

A new analysis by Kerry Emmanuel at the Massachusetts Institute of Technology suggests global warming is making tropical storms stronger.

However, that report did not suggest it is generating more storms and Bell said it isn't possible to determine such an effect because the cycles of more and fewer storms are so strong.