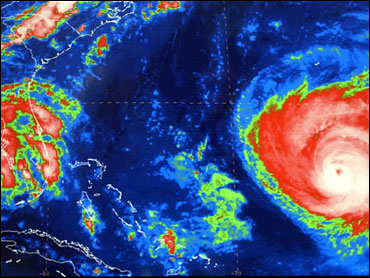 U.S. government forecasters minimally reduced their prediction for the Atlantic hurricane season Thursday, but said that up to nine hurricanes and up to 16 tropical storms are expected to form, still a busier-than-average season.

The National Oceanic and Atmospheric Administration maintained its estimate that three to five of the hurricanes will be major storms of Category 3 strength or stronger. The original report forecast up to 17 tropical storms, with up to 10 becoming hurricanes.

Despite the slight reductions and a harmless season so far, NOAA said atmospheric and oceanic conditions mean that the season likely will be more active than normal. On average, there are 10 named Atlantic storms and six hurricanes, three of them major.

"The early season activity really doesn't reflect what's going to happen in the peak of the season," said Gerry Bell, the lead seasonal hurricane forecaster at NOAA. "The fact that there's been no hurricanes so far means absolutely nothing."

After the battering by hurricanes Katrina and Rita in 2005, there were widespread fears last summer of another powerful storm striking. But the unexpected development of El Nino — the periodic warming of Pacific Ocean waters that affects wind patterns and tends to result in fewer Atlantic storms — helped dampen conditions.

No destructive storms hit the U.S. last year, but forecasters warned this year that El Nino is over, which could prompt conditions that encourage the development of additional storms.

Bell conceded that forecasters overestimated the amount of tropical activity last year, but indicated he was more confident this season.

"The reason was that we failed to forecast the rapidly developing El Nino," he said. "This year there's no chance of an El Nino."

August typically marks the start of the most frenetic months of Atlantic weather.

Last year, there were 10 tropical storms in the Atlantic — and just two made landfall in the United States.