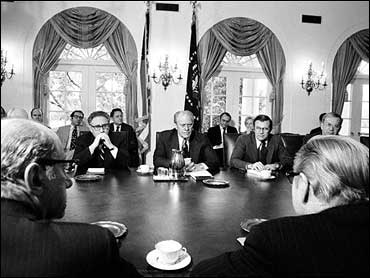 An intense debate erupted during the Ford administration over the president's powers to eavesdrop without warrants to gather foreign intelligence, according to government documents. George H.W. Bush, Donald Rumsfeld and Dick Cheney are cited in the documents.

The roughly 200 pages of historic records obtained by The Associated Press reflect a remarkably similar dispute between the White House and Congress fully three decades before President Bush's acknowledgment he authorized wiretaps without warrants of some Americans in terrorism investigations.

"Yogi Berra was right: It's deja vu all over again," said Tom Blanton, executive director for the National Security Archive, a nongovernment research group at George Washington University. "It's the same debate."

Senate Judiciary Committee hearings begin Monday over Mr. Bush's authority to approve such wiretaps by the ultra-secretive National Security Agency without a judge's approval. A focus of the hearings is to determine whether the Bush administration's eavesdropping program violated the Foreign Intelligence Surveillance Act, the 1978 law with origins during Ford's presidency.

"We strongly believe it is unwise for the president to concede any lack of constitutional power to authorize electronic surveillance for foreign intelligence purposes," wrote Robert Ingersoll, then-deputy secretary of state, in a 1976 memorandum to President Ford about the proposed bill on electronic surveillance.

George H.W. Bush, then director of the CIA, wanted to ensure "no unnecessary diminution of collection of important foreign intelligence" under the proposal to require judges to approve terror wiretaps, according to a March 1976 memorandum he wrote to the Justice Department.

George H.W. Bush also complained that some major communications companies were unwilling to install government wiretaps without a judge's approval. Such a refusal "seriously affects the capabilities of the intelligence community," Bush wrote.

In another document, Jack Marsh, a White House adviser, outlined options for Ford over the wiretap legislation. Marsh alerted Ford to objections by Bush as CIA director and by Rumsfeld, Henry Kissinger and Brent Scowcroft over the scope of a provision to require judicial oversight of wiretaps. At the time, Rumsfeld was defense secretary, Kissinger was secretary of state and Scowcroft was the White House national security adviser.

Some experts weren't surprised the cast of characters in this national debate remained largely unchanged over 30 years.

Lisa Graves, senior counsel for legislative strategy at the American Civil Liberties Union, said comparing the Ford-era debate to the current controversy is "misleading because no matter what Mr. Cheney or Mr. Rumsfeld may have argued back in 1976, the fact is they lost. When Congress passed the Foreign Intelligence Surveillance Act in 1978, Congress decisively resolved this debate.

"Unlike the current administration, the Ford administration never claimed the right to violate a law requiring judicial oversight of wiretaps in foreign intelligence investigations if Congress were to pass such a law."

The National Security Archive separately obtained many of the same documents as the AP and intended to publish them on its Web site Saturday.

The documents include one startling similarity to Washington's current atmosphere over disclosures of classified information by the media. Notes from a 1975 meeting between Cheney, then White House chief of staff, then-Attorney General Edward Levi and others cite the "problem" of a New York Times article by Seymour Hersh about U.S. submarines spying inside Soviet waters. Participants considered a formal FBI investigation of Hersh and the Times and searching Hersh's apartment "to go after (his) papers," the document said.

One option outlined at the 1975 meeting was to "ignore the Hersh story and hope it doesn't happen again." Participants worried about "will we get hit with violating the First Amendment to the Constitution?"

CIA Director Porter Goss told lawmakers this week that recent disclosures about sensitive programs were severely damaging, and he urged prosecutors to impanel a grand jury to determine "who is leaking this information." The National Security Agency earlier asked the Justice Department to open a formal leaks investigation over press reports of its terrorism wiretaps.