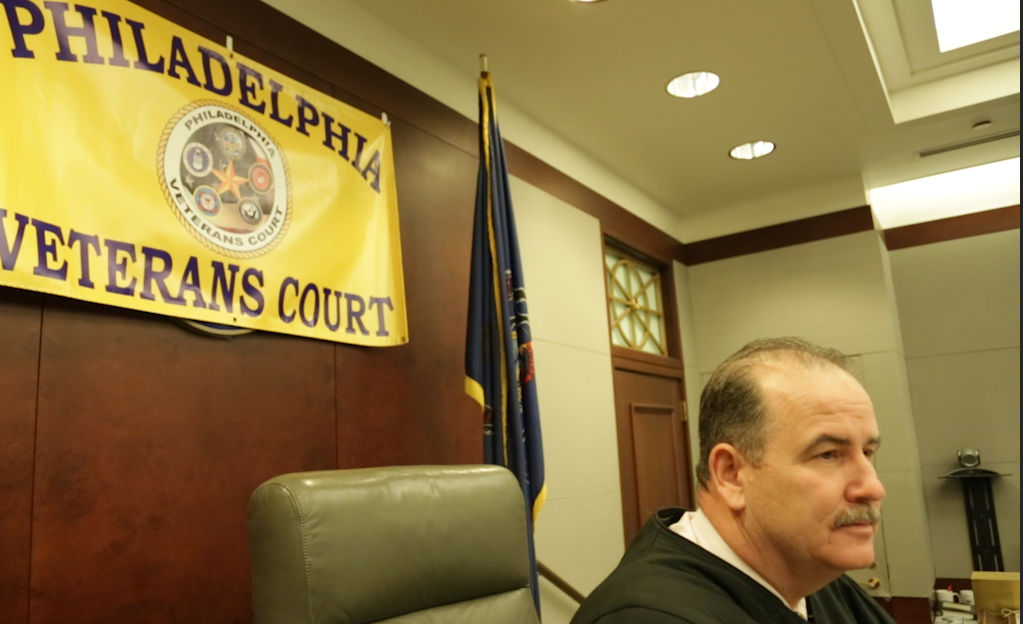 Every Wednesday Patrick Dugan, a judge at the Philadelphia Municipal Court and a captain in the U.S. Army Reserves JAG Corps, presides over a special kind of courtroom.

"You are here because it's your choice," he told a roll call of defendants as he opened court on a recentWednesday morning, pointing to the front bench behind the lawyers: "All these folks are here to ensure you take advantage of the benefits you are owed."

The "folks" in question were representatives from various agencies linked to the Department of Veteran Affairs (VA), because all of the cases being heard in this court involved veterans of the U.S military. Almost everyone present served in combat, according to Dugan.

"It's kind of like a one-stop shop for veteran services," said Dugan. "We're streamlining, because on a county level, we now have the federal government in the courtroom to offer services."

Dugan added how the requirements demanded by veteran courts are much more stringent than a typical criminal defendant experiences: "What I want our veteran defendants to understand is, if you're coming into my courtroom, you need to be ready to go to treatment. You need to be ready to address the underlying issues that cause the criminal behavior."

The first Veteran Treatment Court was founded by Judge Robert Russell in Buffalo, New York in early 2008, after he saw an increase in the number of veterans appearing in his courtroom facing charges stemming from substance abuse and/or mental health disorders.

In less than two years, 19 more veteran courts appeared in different jurisdictions, usually at the discretion of individual judges. By the end of 2012, there were 129. Now there are 197 in operation across the U.S. serving more than 10,000 veterans who might otherwise be incarcerated.

"It's really about the struggle re-integrating after experiencing the trauma of war," said Melissa Fitzgerald, former West Wing actress turned Senior Director of Justice For Vets, a national non-profit that raises awareness and funds for Veterans Treatment Courts.

"We have more than 23 million vets now," she added. "These courts ensure that when veterans return home, they have access to the structure, treatment, and mentoring they need to get their lives back on track."

A member of the Army since 1981, Dugan said he understands the unique issues veterans face when they return home from deployment. A whiteboard board beside his bench permanently displays the names of a given week's "distinguished veterans."

Veteran courts only admit those with a clinical diagnosis of a substance abuse or mental health disorder. The veteran formally enrolls in a kind of 12-steps program that varies in length and design according to the severity of their medical case and crime - usually they're charged with assault or a DUI. Upon successful completion, charges get dropped and records expunged.

"I say to them, I need you to be the person that you were when you served your nation," said Dugan. "I've been there, done that, walked in their boots--I speak the language. Certainly some have gone through a lot more than I did. I was in Iraq but I was not a Marine fighting those horrible battles."

Currently enrolled in the Philadelphia Veterans Court program, Pearson Crosby was one such Marine.

Crosby served in the United States Marine Corps for four years, straight out of high school, completing two tours of Iraq's Anbar province, an epicenter of the Iraq war from 2004 and 2007.

"I've had points of depression and I've seen way too many friends commit suicide," said Pearson. In recent years, an average of up to 22 veterans have committed suicide each day, according to VA data - significantly more than the number of deaths recorded during the entirety of the military operations in Iraq and Afghanistan.

Pearson explained that for many soldiers, a return to civilian life can be overwhelming:

"When you're in the military everything is micro-managed," said Pearson. "You have someone to rely on, but in the civilian world you're really all on your own, and people don't know--they can't understand what you've been through."

Earlier this year, the Washington Post released a report finding that more than half of the 2.6 million Americans dispatched to fight the wars in Iraq and Afghanistan suffer from physical or mental health problems linked to their service. Recent data complied by the RAND organization estimates that 1 in 6 Iraq and Afghanistan veterans are alcohol and/or drug addicted; and that 1 in 5 suffer from post traumatic stress disorder (PTSD) or significant mental anguish.

Prescription drug abuse, especially linked to veterans, is a familiar story by now. A CBS News investigation found that over the past 11 years, the number of patients treated by VA is up 29 percent, but narcotics prescriptions are up 259 percent.

Last year, around 50,000 veterans were treated for addiction across VA hospitals across America. According to the Center for Investigative Reporting, in 2012 VA doctors wrote more than 6.5 million prescriptions for opiates like oxycodone, methadone and morphine- more than the total number of patients they saw.

"I don't see how the amount of medication I was prescribed can be seen as responsible," said Crosby, who became an addict within six months of returning home to a Philadelphia suburb in Bucks County in late 2008.

By last summer, he was taking at least eight types of pills a day and decided to attempt to wean himself off some of them. While he was driving he felt the onset of a seizure and pulled over to call an ambulance for help. He passed out, and when he regained consciousness, he found himself in the back of a police car, charged with driving under the influence-- of his prescribed medication. He spent a night in a holding cell in Philadelphia--his first time in jail. That's how he ended up in Dugan's court.

"I don't know if I hadn't have got arrested, that I would have been serious about getting off the medication and working on getting better," said Pearson, who now lives with his long-term girlfriend Kirsten Hagen, and is set to graduate from his court-mandated program and go back to college.

The week before graduation, over a cup of coffee, the couple mused how, as it turned out, "getting picked up" was the best thing that could have happened to Crosby.

"It's not the same as being picked up with a bottle of Jack in a car, you know?" Crosby joked. "And the court pays attention to that. They're all veterans in there, so they can relate."

While Hagen clasped his hand and agreed with the courts' benefits overall, she said more should be done to help veterans navigate the challenge of re-assimilating into "normal life."

"[The courts] help veterans who would have otherwise been incarcerated have a much better outcome, sure," said Hagen. "But the military should have a transitional kind of treatment for people coming out of the military, when they're coming from areas that make people prone to PTSD, like he was."

Crosby agreed that such a program would reduce the number of veterans finding themselves in the kind of trouble that leads to veteran court.

"Vets are not going to stop coming to the VA in pain," said Crosby, "Between Iraq and Afghanistan, all the IEDs, explosions, the tolls it takes on soldiers bodies and minds...I think they need to find a better way to handle severe pain."

"Still, the court is definitely beneficial," he added. "You're held accountable for how you live."