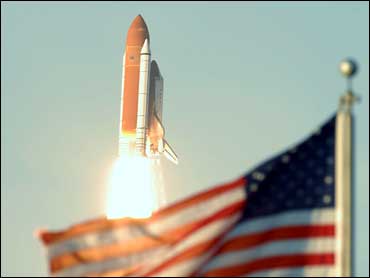 Next time you grumble about your late airline flight, consider the space shuttle: It launches on time 40 percent of the time.

Not so great when stacked against the airline industry, which had a 73 percent on-time arrival record for the first six months of this year.

But then the shuttle is the world's most complicated aeronautical machine, so 40 percent may not be so bad.

The latest delayed shuttle flight is this week's mission. Endeavour, originally set for a Tuesday launch, is now scheduled to lift off on Wednesday.

A database analysis by The Associated Press showed that 47 of the 118 previous space shuttle missions have taken off on their originally scheduled day. Technical glitches account for more than half the delays. Endeavour, for example, was held back because of a leaky valve in the crew cabin.

Bad weather at Kennedy Space Center is to blame for about a third.

"To me as a statistician, a 40 percent success rate for the space shuttle sounds pretty good," said Michael Orkin, author of "What are the Odds? Chance in Everyday Life." He is also business, math and sciences dean at Laney College in Oakland, Calif.
NASA launch director Michael Leinbach said that since the 2003 Columbia accident that killed seven astronauts, "we have more rules to pay attention to."

Since NASA's post-Columbia return to flight in 2005, NASA has had 10 launch delays and only five liftoffs, a 33 percent success rate. In its most successful years, 1997 and 1998, NASA launched 13 times with only three delays, an 81 percent on-time rate.

The good news for NASA is that, over time, technical delays are becoming far less frequent as engineers better understand the complicated vehicle, said Paul Fischbeck of Carnegie Mellon University. The engineering professor analyzed the database of delays.

The bad news: Weather delays are soaring. The reason is probably because the shuttle's only mission these days is to go to the international space station. Because of the orbital mechanics required to hook up with the orbiting outpost, that means NASA has only five minutes at set times of day to launch.

In years past, delays have been caused by five hurricanes, a tropical storm, woodpeckers that hammered away at the fuel tank, and two hailstorms. Strangely, there have been more weather delays in winter than during summer storm season. Launches in December and January had weather delays two-thirds of the time, compared with 40 percent of the time from June through September.

Also, there have been a multitude of technical problems, from main engine difficulties to fueling troubles to wiring kinks.

"If you look at all of the things that have to work in order to launch, including the weather ... you would conclude it's crazy to even try," former astronaut Steve Hawley said recently.

Despite logic, NASA's luck with second, third and fourth tries is not much better. Fischbeck found second tries succeed only about half the time.

"A lot of it is just random," said Fischbeck, who has consulted for NASA.

More than a quarter of shuttle delays have occurred within the three-day launch countdown period, often with astronauts strapped into their shuttle seats. But some hint a postponement is not all that bad.

"Those last couple of months are very, very intensive, very busy," said Dominic Gorie, a veteran of three flights. "So when you get a launch delay in the last week, the crew really gets an opportunity to relax."

Endeavour's commander, Scott Kelly, says astronauts take it in stride. "You can't get frustrated over something you have no control over."

In 2010, the space shuttles will be retired. One of NASA's priorities for its new Orion spaceship, which is being built for moon flights, is to make its launches more timely. NASA exploration chief Scott Horowitz says the design of the new ship may improve its on-time rate to almost 100 percent.