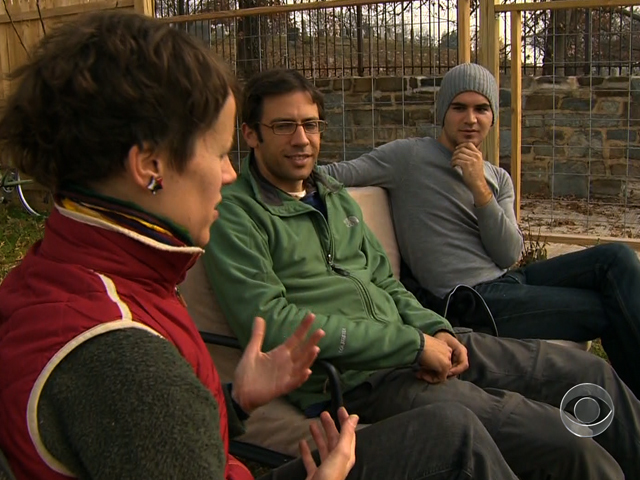 For generations, American home buyers have dreamed of living large. Now in many a crowded metropolitan area, people are downsizing their dreams and learning that living well doesn't always require a lot of room.

Lee Pera, Brian Levy and Jay Austin are building little boxes on an urban hillside in the middle of Washington D.C.

These young professional have turned this once-vacant alley lot into a tiny home community, living small in a city that's short on space.

Across the country, the tiny-home movement is catching on. In addition to free-standing structures, over-crowded cities, including New York and San Francisco, are experimenting with capsule apartments -- residences of less than 300 square feet.

"We've been trending toward tighter and more compact space for quite some time," said D.C. developer Monty Hoffman. He will soon be offering 100 compact apartments -- 350 square-feet apiece -- on the city's southwest waterfront.

He said the housing market is being driven by a new generation of buyers whose priorities have changed.

"They are more about experience than they are about material things," Hoffman said. "They like their space, but they like the street theater... the cafes -- those become our living room."

For the tiny-house neighbors, their living room will include a breathtaking view.

"We're a little worried about zombies creeping in, you know, a few times a year," joked Austin, "the full moons are a bit frightening."

Washington housing codes don't yet allow people to live in these homes full-time, so for now, the group said it's a showcase -- a microscopic model of their American Dream.

"I think a lot of people are starting to understand that lower cost, affordable housing can be very livable," said Levy, "and maybe we don't need the big McMansions that we've been living in."

And just because they are small doesn't mean they are necessarily cheap. These homes cost about $20,000 to build and the small waterfront apartments will start renting at $1,600 per month