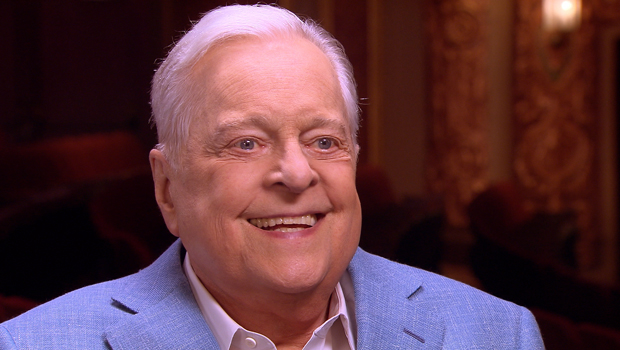 "A Life In Movies" is what Robert Osborne has happily led. He routinely shares what he's learned with his cable TV audience -- and this morning, he shares it with our Mo Rocca:

He's been ushering audiences into Hollywood's glittering cinematic past for 22 years now. But Robert Osborne isn't just a lover of old Hollywood; he's been close personal friends to some of its biggest stars, such as Lana Turner, Lauren Bacall and Bette Davis.

Rocca asked, "Did you ever smoke a cigarette with Bette Davis?"

Rocca met Osborne at the King's Theater in Brooklyn, a true movie palace as splendid today as it was during the Depression, when movies offered escape and solace. "You would buy your ticket for your dime or your quarter or whatever, and you'd come into this place of dreams."

And what better place to talk about the passion that has consumed Osborne all his life?

"You went to a movie theater like this beautiful theater we're sitting in right now, sitting in the dark -- like Norma Desmond said -- and that was something, you know? They were bigger than life."

Osborne was raised in small town Colfax, Washington. He caught the movie bug early, and by college was obsessed.

"I actually spent every Saturday in college going through every copy of The New York Times over about a 20-year period, and made a list of every movie that played, and how long it ran," he said.

"They shoulda locked me up long ago!" Osborne laughed.

He nicknamed his meticulously-kept book "Blackie."

He knew he wanted to work in movies, but he wasn't sure where he fit in. He moved to Los Angeles and tried acting.

"The one thing that I never liked or wanted to do was play somebody that wore a suit and had a briefcase," Osborne said -- which he did, in the 1962 pilot for "The Beverly Hillbillies" (left).

The struggling actor was put under contract by none other than Lucille Ball: "She really was looking for people who could sing and dance, and I couldn't do either. She just liked me."

Lucy was impressed by Osborne's deep well of knowledge about Hollywood's Golden Era. She set him on a new course.

"Lucy ultimately encouraged me to be a writer, not an actor. She said, 'We have enough actors.'"

And so Osborne began chronicling Hollywood and Oscar history: "I wrote a book about the Academy Awards, and it became kind of a focal point of any kind of discussion I had as a writer."

At the same time, he became an entertainment reporter. But Osborne wasn't entirely comfortable in this role. When Hollywood insiders learned that Rock Hudson had contracted AIDS, Osborne -- a friend of Hudson's -- refused to report it.

He countered the argument that "You're a reporter, you need to tell that story," by saying, "No, I don't. He's not the president. He's not a government official. He's an actor. He has a right to choreograph his own life."

Osborne was interested less in exposing than celebrating his movie heroes, some of whom had become close friends, like Olivia de Havilland, Barbara Stanwyck and Bette Davis. "You're like the actress whisperer," Rocca said.

"I love those people!" he laughed. "They were so interesting to be around. These were people that once ruled the world. And now they had no power anymore. Nobody cared."

But his friendship with Davis got off to a bumpy start. On one of their first meetings, Osborne had just seen 1977's biggest blockbuster.

"I said, 'Have you seen the new 'Star Wars' movie?' She said, 'I hate that kinda movie.' And I said, 'Oh, but it's really good. I think you'd really enjoy it.' And she turned to me with full volume and said, 'I told you, I HATE that kind of a movie!' And I said, 'I can't believe you would say something so stupid as that.'

"Well, her head zipped around and looked at me, and I thought, 'She may kill me.' And then I looked at her, and I knew I had her. And that's what she was waiting for: A challenge. And we were friends from then on!"

By the time Turner Classic Movies launched in 1994, there was no other contender for the host. Robert Osborne had spent his life rehearsing for this role. I was preparing for my ideal job that didn't exist," he said.

His favorite interview: former movie musical star Betty Hutton, who -- by the year 2000 -- had not appeared on camera for nearly 20 years. But she opened up to Osborne.

"She was terrified she was going to disappoint people, that they wouldn't remember her," he recalled. "And it's the thing I'm proudest of, I must say, because we had this vulnerable woman who had been such a big star tearing her heart out talking about it."

"My private life has been hell, really hell," Hutton told Osborne. "But my professional life was so wonderful because the audiences understood I was working from my heart."

For Robert Osborne, movies are life ... only better.

"I think we have to have dreams," he said. "We need a little Carmen Miranda with all her tutti frutti hats. And we need some Fred and Ginger dancing. We need Gene Kelly hanging off that lamppost. We need to be taken into a fantasy world, and not be afraid to go there occasionally."