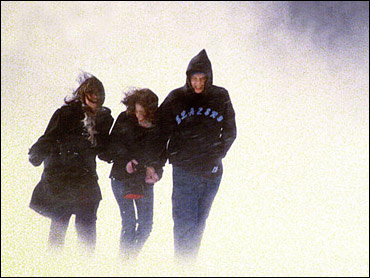 New England and the Northeast were bracing for extremely cold weather, with temperatures in the single digits and effective temperatures, with the wind-chill factor, below zero.

Meteorologist Alan Dunham at the National Weather Service in Taunton, Mass., said a low pressure system in eastern Canada and a high pressure system in central Canada are "just funneling this Arctic air right down on top of us." Snow is expected, too.

Parts of Maine were expecting a high of minus 14 and a low of minus 27 — without the wind chill, reports CBS News Early Show National Correspondent Jon Frankel.

"They've even canceled all the schools in the area because of the extreme cold weather," inn owner Steve Shaw in Caribou, Maine, told CBS Radio News. "I don't recall them ever doing that before, so it's quite an event."

His Caribou Inn is playing host to a number of Border Patrol agents and their families from the Southwest, and they're not happy.

"They've been really complaining about the cold, coming in and warming their vehicles up for 20-25 minutes and all bundled up like Eskimos," Shaw said.

New Englanders were, for the most part, taking the cold snap in stride, reports Carl Stevens of CBS radio station WBZ in Boston.

"They know it's January, they know it's New England, but these kinds of temperatures are very unusual," Stevens said.

Several northeastern cities will have patrols looking to get the homeless off the streets and into shelters.

One of the coldest spots in the Northeast is always the weather station atop Mount Washington in New Hampshire.

Wednesday morning, the temperature was "negative 44 degrees and our winds were a brisk 75 miles per hour out of the northwest, and it's making our wind chill, our actual temperatures, feel like negative one hundred degrees," said meteorologist Tim Markel. "We have to dress in layers, we definitely cannot be outside for more than a couple of minutes, any exposed skin, basically, will be subject to immediate frostbite."

The big concern for those outside is hypothermia and frostbite, said Dr. Amir Darvish of St. Luke's Hospital in New York.

"Initially you see redness and swelling," he said. "Pain is one of the telltale signs, a loss of sensation" is another.

As the mercury falls and oil prices rise, heating companies are happy, but that's it, reports Frankel. Not even ski resorts like these conditions: Skiers say it's too cold to be on the slopes.

Maine state police advised motorists to stash extra clothing in their vehicles, keep their gasoline tanks full and remain with their vehicles in the event of a breakdown.

Along the Massachusetts Turnpike in Framingham, west of Boston, Stevens talked to a man who was "fixing trucks that are dead on the side of the road" with problems like frozen air hoses. "It's that time of the year," he said.

Temperatures are expected to rise to the mid-20s this weekend, and may break freezing on Monday, forecaster Dunham said.