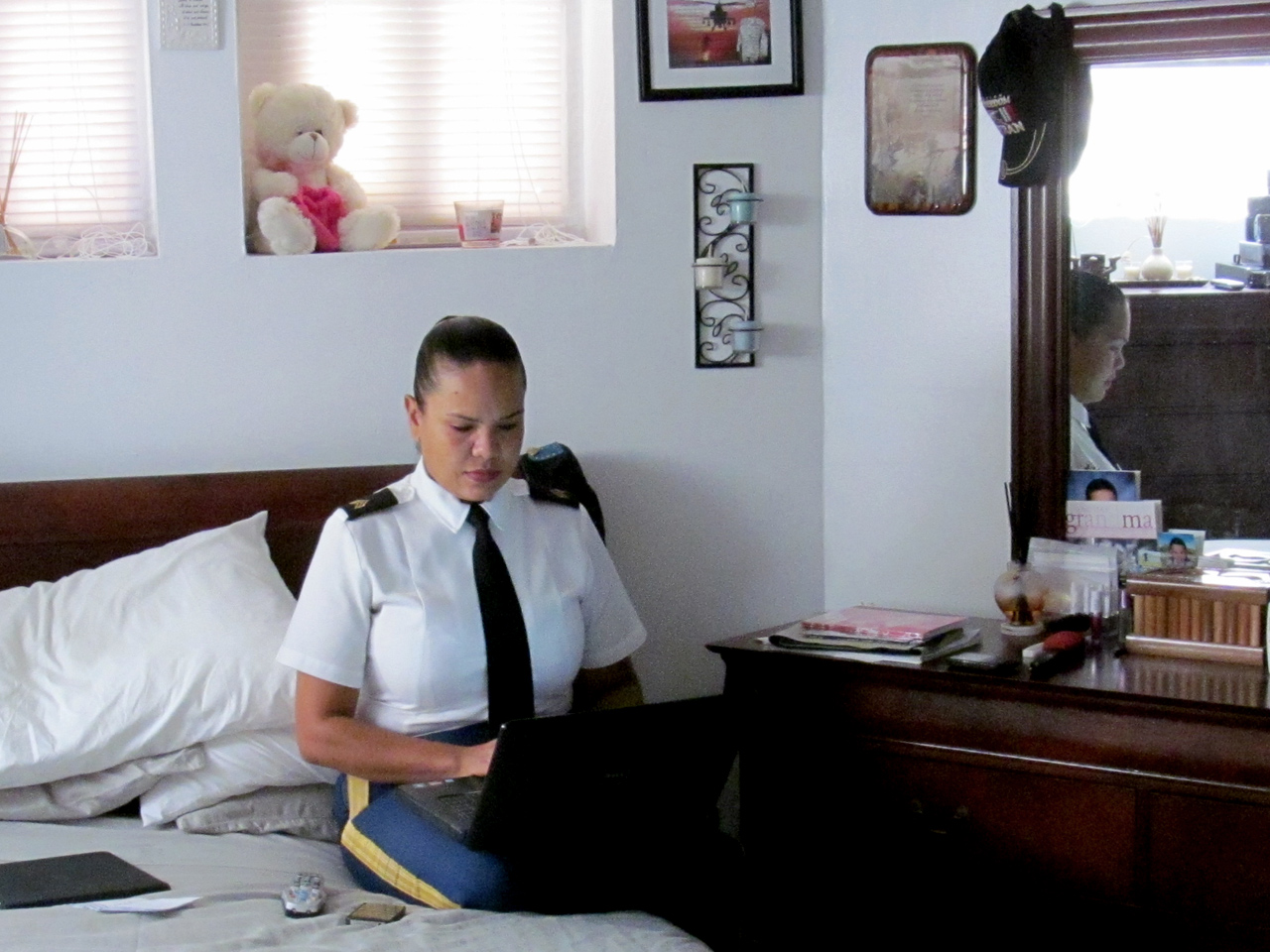 (CBS News) NEWARK, N.J. - Norma Mojica fulfilled a life-long dream to serve her country and joined the military at the age of 36, enrolling in the Army National Guard in New Jersey. She'd wanted to for a while but, after three kids, didn't think it was possible. Still, she found an opportunity with the Guard and successfully completed boot camp. Mojica even ended up deploying to Iraq in the same unit as her son, now-22-year-old Pedro Martinez, in 2009.

Mojica, now 44, had been working between deployments at Wachovia Bank doing various administrative duties, mainly in human resources. After Wells Fargo bought Wachovia in 2008, it laid off many of the latter's corporate staffers, including Mojica. Upon her first return stateside, she struggled to find work, all the while feeling pressure to help her growing family -- she's a grandmother to six kids now. So she volunteered to be shipped off to Iraq in late 2010 for a second year-long deployment.

In addition to her corporate experience in human resources, Mojica earned the rank of sergeant and spent one of her deployments guarding high-level detainees in Camp Bucca in Iraq. Add to those accomplishments and responsibilities the discipline, perseverance and work ethic of a successful military member and she would seemingly be a top candidate for an administrative job, which is the kind of employment she seeks. Yet nearly a year since she returned, the dozens of job applications she has submitted have yielded nothing.

"My next option is, if I want a job, I volunteer to be deployed again," Mojica said last week after spending some time looking online for work in her Newark, N.J., basement apartment.

Veterans overall have a historically lower unemployment rate than the general population, but there are segments of the veteran community that fare worse than the rest of the population. While there are no official statistics, there is a lot of anecdotal evidence indicating that the veterans having the most difficulty in finding work are in the National Guard and reserves. Some units who have been required to rotate in and out of warzones in recent years report combined unemployment and underemployment rates of more than 50 percent.

"The Department of Defense has no idea how to get people employed," said Ted Daywalt, president of vetjobs.com, the VFW's online job site that bills itself as the largest for veterans. "They don't understand how the civilian system works. They're very concerned about the high employment, (but) they're floundering on trying to figure out what to do about it."

After war, vets fight for jobs at home

"DoD recognized the need for a redesigned TAP after 20 years of a one-size-fits-all approach," Smith said in an emailed statement. "The redesigned TAP will provide Service members with the tools and opportunities to be 'career ready' for civilian employment. The (Department of Labor) recently undertook a nine-month effort to develop a new employment workshop that builds participants' employment-seeking skills."

Smith said all military members, including Guardsmen and reservists demobilized after 180 days of active duty, are now mandated to take part in the training.

Tom Tarantino, chief policy officer for Iraq and Afghanistan Veterans of America, said in decades past, Guardsmen and reservists used to experience lower rates of unemployment than other veterans.

"That's not been the case the last couple of years because we've not been using the National Guard for what they're designed for," Tarantino said.

The National Guard and military reserves were created early last century to be a strategic reserve in case of national emergencies, like natural disasters or terrorist attacks. For decades, they normally just trained one weekend a month and helped out when the snow got too deep or a tornado ripped through town. However, since 2001, more than 375,000 Guardsmen and more than 285,000 reservists have deployed to Iraq and Afghanistan in what some call the "hidden surge" of those wars. Not even in World War II were those two groups leaned upon so heavily to fulfill duties normally assigned to the active-duty military.

When they're not deployed, Guardsmen and reservists aren't paid by the government, so they must find work on their own.

The Uniformed Services Employment and Reemployment Rights Act (USERRA) was created to protect Guardsmen, reservists and all military members from discrimination based on their military commitments. However, Daywalt, from vetjobs.com, said there are ways around those protections.

A Guardsman or reservist typically receives notice 160 days before they deploy. Between that notice and the time they find out where exactly that deployment will be, military employees aren't covered by the protections of USERRA, Daywalt said. One Iowa Guard unit told Daywalt that a vast majority of their 750 soldiers lost their jobs in that window before deploying last year.

Spokeswoman Ann O'Hanlon with the Federal Office of Special Counsel, which recently began helping the Department of Labor enforce USERRA, said the people in her office who work on the law weren't aware of any loopholes.

"In theory, a service member who takes an excessive period of time in advance (e.g., a week off to prepare for weekend drill) might be subject to discipline, but should still have reemployment rights. To have reemployment rights, one must provide advance notice, perform qualifying service, and timely request (for) reemployment/return to work. The burden is on the employer to disprove eligibility," O'Hanlon wrote in an email.

The problem with employment and Guardsmen and reservists isn't invisible to politicians and military leaders, Daywalt and others told CBS News in several interviews.

A combination of better transition training, in-service certifications, better protections in the workplace, employer compensation, mentoring, and state-level programs are just a few of the things that would help improve the situation, Daywalt said.

To pass time while looking for work, Norma Mojica works in the Honor Guard, accompanying coffins of recently deceased veterans to their final resting places in northern New Jersey up to seven days a week for about $60 per day. She works with a team of fellow Guardsmen, all of whom don't have steady jobs. They all say the pay is barely enough to keep their heads above water, and that they do it because they can think of no better way to make it through the depressing slog of long-term job hunting than fulfilling a fellow veteran's final honor.

The ritual of the Honor Guard is solemn, brief and precise. They go to funerals usually in crews of three, and two of them stand at attention beside the coffin in their dress uniforms as a clergyman reads last rites. Just before the coffin is interred, they carefully fold the flag into a triangle, end over end, and then hand it to a family member. Then the third member of the group raises a bugle and plays "Taps", a mournful song that gives chills from any distance. Finally, they stand at attention and greet family members as they leave the ceremony.

Lt. Sergio Suarez, 25, who works with Mojica in the Honor Guard, estimates that at least every other Guardsmen he knows is either unemployed or underemployed, himself included for the last 10 months. Another fellow Honor Guardsman, Spc. Jesse Espaillat, 20, said the problem isn't necessarily finding work, it's finding a sustainable career. He has gotten jobs at places like Best Buy and Staples.

"Those (lower wage jobs) are easy to find," Espaillat said. "But they pay too little. I get paid better doing this, serving families at funerals."

(Watch a special report below from CBSNews.com on the struggles veterans find in searching for work, featuring Norma Mojica and her fellow Honor Guard members.)

Editors Note: This story was amended to reflect a response from the Department of Defense that was submitted after it was published.