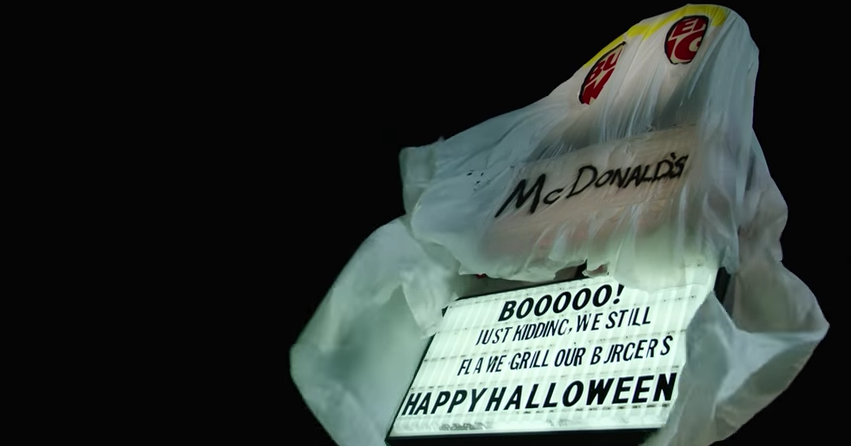 Every October, people and brands alike clamor to come up with the year’s most innovative Halloween costume. It’s an annual tradition that awards extra points for humor. And this year, a Burger King location in Queens, New York, came up with a real Whopper of an idea.

The BK, located at 92-85 Queens Boulevard, has draped itself in super-sized white sheets, emblazoning those billowing sheets with beady red eyes and yellow eyebrows (or shall we say, golden arches). If those colors seems off-brand to you, you’re on to something. This Burger King is in costume as the ghost of McDonald’s. Because, for a Burger King fan, what could possibly be scarier than that?

That’s right. This Halloween, trolling is the special sauce between the all-beef patties on the sesame seed bun.

Soda giant PepsiCo executed a similar Halloween stunt a few years ago, releasing promotional images of its cans draped in Coca-Cola capes. The tagline on the campaign read, “We wish you a scary Halloween!”

So, it appears that mocking the competition may be a common theme among major brands looking to stage an epic joke for the holiday. The scale of this New York Burger King’s exploit just makes it scary good.

And it appears that Burger King’s corporate arm agrees. Despite the fact that the fast food apparition can only be seen at one BK location, Burger King released the “Scariest BK” video above — reportedly coordinated by Miami-based agency, DAVID — on its official YouTube page.