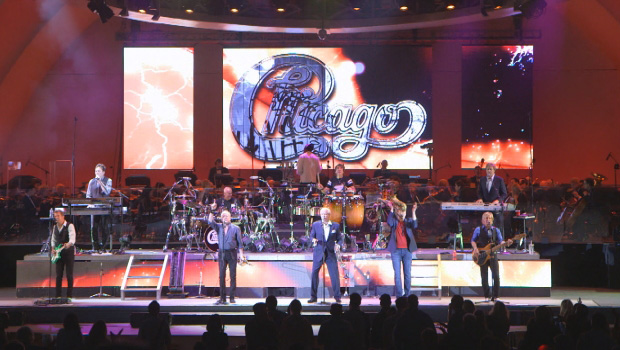 "Beginnings" is a song whose popularity seems to have no end. And it's just one of many hits that have made Chicago one of the best-selling groups of all time. John Blackstone has their story For The Record:

On a summer evening at the Hollywood Bowl, time stood still.

The band Chicago, now in their 50th year of performing, made music from decades ago seem like more than just blasts from the past.

Lee Loughnane, Robert Lamm and Jimmy Pankow were three of the seven original members of the band -- college kids who charted a course back in 1967.

"We were gonna be kind of a rhythm-and-blues band -- a rock band with horns," said Lamm.

Their initial goal, said Loughnane, was to be "a show band in Vegas for probably, what, a month?"

"Yeah, that was the ultimate goal," said Lamm. "And to someday make a record."

On their quest to make a record, they left Chicago for Los Angeles, where they got a regular booking at Whisky-A-Go-Go.

"I remember going out in the corner, taking a picture of the marquee with my little Brownie camera, 'cause our name was on the Whiskey A Go Go!" Pankow said.

They didn't have top billing (according to Lamm, "We were the house band on the off nights"), but they did get noticed, in large part because of the talent of lead guitar player Terry Kath.

Pankow recalled, "We were coming out of the dressing room to go back on stage, and there's a guy standing in the doorway. It was Jimi Hendrix. And he looks at us and he goes, 'You guys got a horn section that sound like one set of lungs and a guitar player that's better than me. You wanna go on the road?' 'Yeah!' So we became Jimi Hendrix's opening act."

Chicago has been on the road every year since. They have sold more than 100 million records, made 36 albums, and have more than 20 Top 10 singles.

In April they performed for their induction in the Rock and Roll Hall of Fame. Thirty-seven million fans voted to put them there.

They recorded their first album in 1969. It was only the beginning of a string of hits.

Back then, they called themselves Chicago Transit Authority. The city's real transit authority objected, or so the story goes.

"Some fella came into the control room," Lamm recalled, "and he was saying, 'Why don't you just call yourselves Chicago?' And then he left! I don't even know who this guy was. And I remember we all sort of looked at each other, you know? 'That's a great idea!'"

"So the name was changed not because the Chicago Transit Authority was gonna sue you?" asked Blackstone.

"Personally, I think that was just flack," Lamm laughed. "That was somebody's idea of a good PR hook."

Along with the name change came the logo on their second album. From then on, Chicago written that way would never mean the city -- it would only mean the band.

Blackstone noted, "Your logo is arguably more famous than any of you are."

"Oh yeah," Pankow said. "We've been hiding behind that logo for 50 years!"

With that second album they started to get radio play.

"Looking back, of course it was a grand vision," Pankow said, "because if it had been one or two albums it would have been pointless!"

"Chicago X," released in 1976, included the number one hit, "If You Leave Me Now," written and sung by Peter Cetera.

Pankow said, "We had the Midas touch and we could do no wrong. We got spoiled. We got full of ourselves. I think everybody does, you know, with 'stardom.'"

Along with the fame came drugs, alcohol and tragedy. In 1978 Terry Kath died after accidentally shooting himself. The hits stopped coming.

But Chicago wasn't finished. They got a new producer, David Foster, who wanted less brass and more ballads sung by Cetera.

"Peter Cetera was never crazy about horns from the get-go," Pankow said, "and the result was considerably less horn involvement. And that was a bit difficult to swallow for the horn section!"

The album "Chicago 16" (1982) put them back on the charts, and they were discovered by younger listeners who didn't know the old songs. Of that whole new generation, Pankow remarked that there are some people who are puzzled why their first album is titled "Chicago 16."

"The proof is in the pudding: The songs that came out of that collaboration were great, and we still play 'em every night," Loughnane said. "And they work."

The songs are the same, but members of the band have come and gone. In 1985 Cetera left to pursue a solo career.

"It's like a family," Lamm said. "There are divorces, there are deaths. There are people who just leave town."

Or as Pankow described it, "It's evolution."

With that evolution the band has now grown to nine members. Lead guitarist Keith Howland is one of the newer ones. He's been with them "Twenty-one-plus years, 22 in January," he said. "And I had no clue that this gig could go this long. 'Cause, you know, I was 30, they were 50. And I thought, 'You know, these guys are gettin' up there.' And of course now I'm 51 goin' on 52 and no end in sight!"

Blackstone asked, "Have you figured out what it is that keeps these guys, now late 60s, early 70s, going?"

"Same thing keeps every musician going -- they love what they do," Howland replied.

Pankow admitted that "We can't do this forever. So when we can't do it 1,000%, we'll probably decide to maybe, 'Oh well, maybe we should walk away.' But that's not anywhere in the near future."

For now Chicago is making no concessions to age.

"And this band cooks! I mean we'll go up against anybody," Pankow laughed. "You wanna rock and roll? Okay, come on. Show us what you got!"