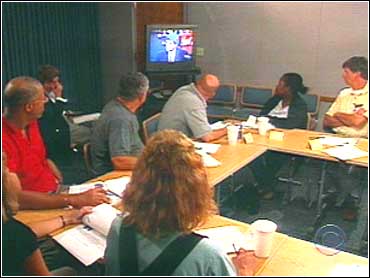 What a hard veepstakes road for Al Gore to trod in his quest for the White House.

CBS News Correspondent Phil Jones reports that even members of a CBS focus group who are leaning towards voting for Gore aren't thrilled with the list of potential Democratic VP choices.

"It's difficult from this field, quite frankly," said architect J.V. Lee, one focus group participant. "I think that these candidates are probably not as distinguished as they are on the Republican side. It's just kind of a hard revelation for me."

What about Evan Bayh, the first term U.S. senator from Indiana? "Too young," was one response.

"I don't think he's ready," said Rita Winston, a mother and another focus group member, who then brought up one of Bayh's Hoosier predecessors in the Senate.

"Do you remember when Dan Quayle was vice president?" she said. "Nobody wanted anything to happen to the president."

How about Florida Senator Bob Graham? Five seconds of dead silence elapsed after that question was asked, prompting pollster DiVall to say to the participants: "Well, that's pretty telling right there."

As for Massachusetts Senator John Kerry, a one-word reaction from the group: "Kennedyesque."

Illnois Senator Dick Durbin comes from a big electoral state, but demonstrated no big voter appeal with the focus group.

Connecticut Senator Joe Lieberman's criticism of President Clinton during the Monica Lewinsky scandal did have appeal to those focus group members leaning towards voting for Bush.

"I like Dick Gephardt and I like him because of his familiarity," said Karen Coohan, a focus group member.

Mitchell was viewed positively because of his post-Senate role as peacemaker.

"I think he's a miracle man because he forged this peace in Northern Ireland," said participant John Donnelly, who's retired, of Mitchell.

By picking Gephardt and Mitchell, this focus group is saying Al Gore should go for a vice president who can match Dick Cheney's experience. But as the conventions near, sources in the Gore camp are hinting they may go for youth, the future, and big electoral states - instead of experience.