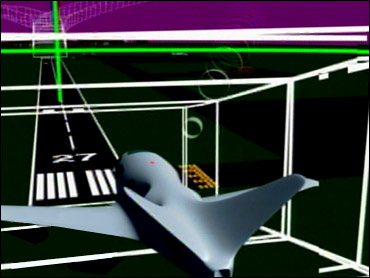 Have you ever dreamt about the day you can buzz around in your very own flying machine? Well, that day may be sooner than you think.

The folks at NASA have built something called "The Highway in the Sky." It's a computer system designed to let millions of people fly whenever they please, and take off and land from wherever they please, in their very own vehicles.

And here's the good news -- a lot of people are building machines you'll be
able to buy.

One of those people is an inventor named Woody Norris. This week, he will receive America's top prize for invention. It's called the Lemelson-MIT award -- a half-million dollar cash prize to honor his life's work, which includes a brand new personal flying machine. reports.

It's called the AirScooter, and self-taught inventor Woody Norris says it goes on sale later this year.

Norris, 66, asked one of his test pilots to demonstrate the AirScooter for 60 Minutes on a hilltop outside San Diego, Calif. It can fly for 2 hours at 55 mph, and go up to 10,000 feet above sea level.

Everything is controlled from the motorcycle-like handle bar. Push it forward and the two counter-rotating blades pivot forward. Push it back and it goes back. Norris says you won't need a pilot's license if you fly it under 400 feet in non-restricted air space. And he's going to sell it for $50,000.

A lot of inventors have tried to cash in on personal flying machines. One, built in 1956, was known as Molt Taylor's Aerocar. You could detach the wings and haul them behind you. But they failed to catch on because they were too expensive and hard to fly in bad weather.

More important, there was no way to really manage all the potential traffic from millions of them buzzing around -- that is, until now. And that's because NASA has come up with a plan to make personal flying machines a reality.

Bruce Holmes is one of NASA's chief strategists and has served in the White House, where he worked on the future of aviation. He showed Simon a flight simulator, a new computer system that can be put into any new airborne vehicle. He says it will make flying easy, and will manage all the new traffic up there. It's called "The Highway in the Sky," and here's how it works: In a NASA animation, pilots focus on one main screen. It's very much like a videogame. Keep the plane inside the box, away from other vehicles, and the plane's computers automatically guide them towards their destination. They can even follow the highway down to the ground.

"What is different between what you're looking at here and what there is in a cockpit of a commercial aircraft?" asks Simon.

"Well, here's what's in the cockpit of a commercial aircraft," says Holmes. "So I can either use that to figure out where I am and how fast I should be going, and how high I should be, and all of those things, or I can look at a fairly intuitive picture of a highway in the sky."

It's a $130-million program that can also help pilots fly in bad weather. Even if it's dark and stormy, pilots can use the screen to see what's outside. It's a technological breakthrough that will ultimately allow more people to fly than ever before. And NASA says it will draw on modern day satellites and global positioning systems to track the flying vehicles -- to prevent them from bumping into each other. Holmes believes all this new technology has reinvigorated the race to build the personal flying machine of tomorrow.

What kind of inventions are people working on today? "If you can imagine it, someone's trying it," says Holmes. "Everything from machines that can fly vertically that are easy to use. Easier to use. Some that can go way fast."

The Skycar is the latest attempt to build a real flying car. It's been described as a cross between a Ferrari and a Batmobile. Its inventor is Paul Moller, of Davis, Calif.

When its four sets of rotary engines tilt up, the car can blast off up into the sky. But Moller's only working prototype is tethered to a crane -- just in case it falls. Moller says the gasoline-fueled Skycar is designed to cruise at 300 mph, at an altitude of 20,000 feet.

Moller says the ride could be described as mystical. But when is this vision going to be real? "Somewhere between 10 and 15 years, you're going to see numbers of these vehicles out there being used," says Moller. "First, you're going to see them well before that in a military, paramilitary, police, drug addiction, border patrol type of capacity."For instance, Moller thinks it will be able to save people from burning buildings -- as demonstrated in his promotional video, which shows the Skycar bypassing traffic jams, extending a built-in catwalk, and ultimately saving the day.

But Moller isn't the only inventor to dream about the utility of flying vehicles. In Olney, Texas, a brand new contraption is even making cows turn their heads.

It's called the CarterCopter, and it has a large top rotor and small wings which double as fuel tanks. Propulsion is generated from the tiny secondary propeller at the rear of the plane. It can take off and land vertically like a helicopter, but can fly as fast as an airplane.

"We're doing something that a lot of people thought was impossible to do," says inventor Jay Carter, a former Bell helicopter engineer who went into business for himself. "It's the Holy Grail. You know, that has been the desire since we first started flying, to be able to take off and land vertically and then fly fast. It's going to change transportation."

"Even though this is a propeller driver aircraft, and we can only probably fly maybe 400 miles an hour, we can beat a jet if you talk about from point to point," says Carter. "Even if you go all the way across the United States, we can beat a jet. And when you're starting to talk about from point to point, small town to small town, and you don't have to worry about the hub, now it gets to be major!"

Carter says he will initially sell the vehicle for about $300,000. He's even got plans to give his next prototype, which appears in his promotional video, the ability to fold up its wings and drive off like a car.

If you're interested in something smaller than the CarterCopter, visit Acampo, Calif. A bizarre looking contraption called the Springtail is the jetpack for the 21st century. It's a million-dollar prototype that flies using two large ducted fans. Harry Falk and his team at Trek Aerospace are still testing its vertical abilities. And to protect their investment, they've also tethered it to a crane. When it takes off, it's loud and generates a lot of wind, but the team says it's designed to fly for two hours, at 90 mph, at an altitude of 400 feet.

"Clearly, we've caught a wave of the future," says Falk. "NASA's building the 'Highway in the Sky' program is really what develops the infrastructure for us to be able to put these things in the air and fly them safely."

The Springtail is still experimental, which means Simon is not allowed to fly it. But he thought he'd ask anyways.

Falk showed Simon where the starter button was.

"So I could start it now?" asks Simon.

"It would start," says Falk.

"It would start," says Simon. "You look a little nervous when you say that."

"Yeah, you have your finger on the button," says Falk, laughing. "Of course, I'm nervous."

Although Falk was nervous, AirScooter inventor Woody Norris was eager for Simon to fly. Norris arranged for Simon to take his $50,000 invention out for a spin. First, his team tied the machine down to the ground. They didn't want Simon flying away forever, until he felt comfortable taking off evenly.

Norris says it takes just a few hours to master. "We wish you luck," he says.

On Simon's first try, he lifted off, but couldn't hold it even. So he tried again, and again. On his tenth attempt, he finally did it.

"That was wonderful," says Norris. "That was amazing. I was pretty impressed for how fast you acquired your skill."

"Well, a lot of people are involved here," says Norris.

Norris, like many of the inventors that 60 Minutes met, believes today's planes and jets will ultimately become relics – and that "The Highway in the Sky" will be filled with flying machines that we can't even begin to imagine.