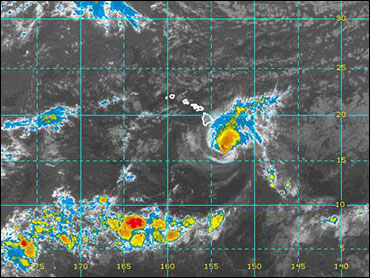 Hurricane Flossie was downgraded to a Category 2 hurricane Tuesday as it roared on course to brush the Big Island hours after guarded residents were rattled by a 5.3 magnitude earthquake.

Schools closed Tuesday in anticipation of the hurricane, which maintained maximum sustained winds of 110 mph and was expected to pass as close as 100 miles from the islands. Forecasters said it would lash the shores with strong winds, up to 10 inches of rain and waves up to 20 feet.

The forecast calls for Flossie to make its closest pass sometime Tuesday afternoon and evening, reports CBS Affiliate KGMB9 in Honolulu. That's when Big Island residents can expect the most severe weather.

The National Weather Service placed the Big Island under a hurricane watch and a tropical storm warning because of the storm, which was supposed to affect the island through Wednesday. A flash flood watch was also issued for the island.

After Tuesday night the effects of Flossie are expected to wane, reports KGMB9.

The earthquake 25 miles south of Hilo on Monday night caused a small landslide, but there were no reports of injuries or structural damage, said Tom Brown, a spokesman for Hawaii County Civil Defense.

While Flossie stirred up the Pacific, Tropical Storm Dean formed Tuesday in the open Atlantic, but it was nearly 1,500 miles east of the Lesser Antilles in the Caribbean. By late morning, it had top sustained wind of 40 mph, just above the threshold to be a named storm.

The Big Island is largely rural, with about 150,000 people — and most live in the west or northeast, not the southern portion that's expected to be hit hardest by the hurricane. Other islands are expected to get much less of the storm's wind and rain.

At 2 p.m. EDT, Flossie was about 190 miles south-southeast of Hilo and 370 miles southeast of Honolulu, the Central Pacific Hurricane Center said. The storm was moving west-northwest at about 11 mph.

Meteorologists cautioned that even a slight change of course could bring the storm closer to land.

"We're not out of it, but this is too close for comfort," said National Guard Maj. Gen. Robert Lee, the state adjutant general.

In the Atlantic, Tropical Storm Dean was about halfway across the ocean from Africa. At 11 a.m., it had sustained wind of 40 mph and was moving west at about 23 mph, according to the National Hurricane Center in Miami. Dean was moving over increasingly warmer water, where conditions could create a favorable environment for intensification into a hurricane by Friday, but forecasters said it was too early to tell where Dean will go.

Hurricane forecasters also warned that storms moving over the south-central Gulf of Mexico were getting better organized and could soon develop into the season's fifth tropical depression. Reconnaissance aircraft were scheduled to check the area later in the afternoon if needed.

Hurricane season runs from June 1 to Nov. 30. In May, forecasters said the Hawaiian Islands and the rest of the central Pacific faced a slightly below-average hurricane season, with just two or three tropical cyclones expected because of lower sea surface temperatures.